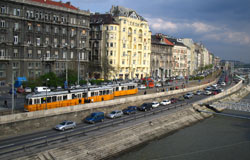 Hungary, once part of the Austro-Hungarian Empire became a member of the European Union in May 2004. The country is landlocked in Eastern Europe and borders with Romania, Slovenia, Serbia, Croatia, Ukraine, Slovakia and Austria. Hungary was shaped as a result of German rule and Soviet occupation, evidently leaving their influences historically and culturally throughout the country, added alongside other conqueror's marks left throughout the ages.

Above the capital of Budapest, on the hilltop sits the historic Buda Castle, surrounded by various buildings and houses shaped architecturally throughout time. Taking a walk through the cobble stone streets, leads one to the Citadella, the historic fortress, encircled by walls and exposing an incredible view of Budapest.

Hills and forests in Hungary make for amazing sceneries, regardless of the cold winters and hot summers. Hungary is truly a beautiful country, full of diverse culture, traditions, amazing architecture and a vibrant lifestyle, offering many options for any visitor. On a typical lazy day one can sit by the Danube River in a cafe, or enjoy a serving of the paprika spiced Goulash that makes Hungary's most popular dish in one of the many restaurants.