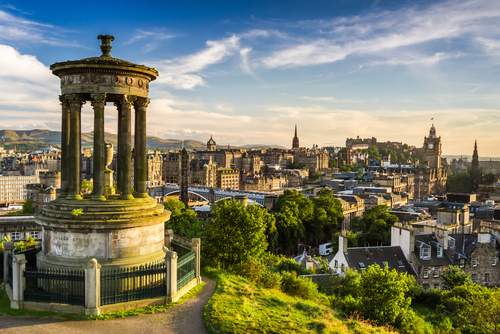 Sometimes college feels like it’s all about study study study, and where’s the fun in that? Well, you just need to add one glorious word after study… “abroad”! But where?

What about Scotland? For one thing, Prince William and Kate met at college there, and it’s still their favorite vacation spot to this day. Must be something pretty special about a place where the royals got schooled and still prefer to play. Also, Scotland’s official animal is the unicorn. These are officially people I want to meet!

Why Study Abroad in Edinburgh, Scotland

Are you into mythological beasts? In Scotland you can visit the famous Loch Ness where people have claimed sightings of the affectionately named “monster” Nessie for nearly 1,500 years. Although its existence has never been proven, Nessie lives as a sort of specter in the minds of many and thus might just empower your imagination and snap you out of that college boredom spiral.

Speaking of mysterious and beautifully rare creatures, Scotland is also the country with the highest proportion of redheads at around 13%. And if you’re still yawning after hanging out with Ron and Ginny Weasley—yeah they’re from Devon, but with hair like that, there’s gotta be some Scotch background in the family (whomping) tree—there’s always the daring adventure of Scotland’s most notorious dish, haggis. Why not throw on a kilt and give it a whirl? You can show the world what you’re really made of by eating a meal normally prepared with the heart, liver, and lungs of a sheep, boiled in the casing of an animal's stomach. Yummy and delightful, like waking up to bagpipes on a misty morning under a tartan blanket.

Edinburgh, Scotland’s capital city, will stun you with gorgeous age-old cathedrals, castle, and much of its original character that dates back to the nineteenth century. Studying abroad in Scotland could be a creatively inspiring journey because it’s the homeland of many great modern thinkers including Adam Smith, James Watt, David Hume, and John Stuart Mill. Scotland also has a long history of invigorating the creative juices, spawning such brilliant writers as Sir Walter Scott, Lord Byron, and Sir Arthur Conan Doyle.

Need to get out of the city? A perfect day trip is the Hamilton Mausoleum in South Lanarkshire, only about an hour drive from Edinburgh. The Hamilton has the longest echo of any manmade structure in the world; a whole fifteen seconds.

Another one of the best things about Scotland is all the luscious green foliage and marvelous climate. It’s mild and mellow even at the heights of summer and winter. Get in the mood by rewatching the Braveheart or Highlander movies, or the Outlander series, which also features many authentic Scottish landscapes, lodgings, and standing stones—though we’re sad to say Craigh na Dun didnae truly exist, ya ken?

Ready to start your journey and find a study abroad program in Edinburgh today? Browse the listings below. When you find a program you’re interested in simply click “Learn More” to contact the program directly. Good luck on your search!