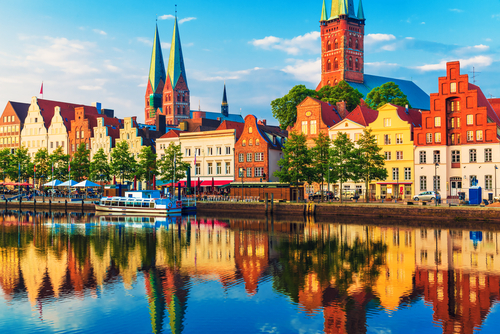 If getting to Central Europe is on the top of your Summer destination list, Summer Study Abroad in Germany is a great choice. From the altitude of the Bavarian Alps to the shores of the Baltic Sea, Germany boasts biodiversity, a dynamic technological sector and is one of the leading economic powers world-wide. Whether you are a political science or history buff, want to learn German, or listen to classical music in the birthplace of Johann Sebastien Bach, read on for more information why studying abroad in this multi-faceted country.

Wow- whether architecture appeals to you, industrial output inspires you or culture captivates your heart, Germany has all that and more. Summer Study Abroad in Germany programs allow you to earn credit while you get your travel fix, and potentially visit neighboring German cities from your home base.

FUN FACT: How to say hello in German? Hallo! People in Germany usually prefer to greet non-family members with a handshake rather than cheek-kissing ~ in other words, know your audience, know the greeting!

Germany is the perfect setting to explore museums, theatres, architecture, art and music. Famous for fairytales, Germany is the home of the Neuschwanstein Castle – the inspiration behind Walt Disney’s Sleeping Beauty Castle. If you don’t get there, 20,000 other castles dot the German landscape. Wherever you are locally, summer in Germany is a time of outdoor festivals, perfect for sight-seeing and practicing any new-found language skills.

If walking the same streets as Ludwig van Beethoven is music to your ears, Bonn would be a great city to visit. But the music scene in Germany has other faces – it is the largest music market in Europe. Berlin is climbing up the charts in the music and entertainment industry, and the electro and techno scenes are gaining in popularity.

Let’s just admit it – you love German beer. Oktoberfest is the well-known autumn festival held in Munich, Bavaria. It’s the world’s largest beer festival…just sayin’! German's are definetly known for their love of ale. If you are more of a crisp glass of reisling type, German wine country regions like Wurxburg offer breathtaking geography with temperate climate and fertile soil. Nice change of pace if you are studying in the city and want a leisure day.

Like some food with that? You can find some top notch Michelin star restaurants but also eat locally wherever you are with your new German friends. Here’s a taste now: Apfelstrudel (apple strudel) with your coffee, Bratwurst (sausage) and sauerkraut at a market stall, German chocolate anywhere, gingerbread cookies...

If you are a political science, philosophy history or archaeology person, picture visiting the Berlin Wall or the Brandenburg gate. Studying abroad in Germany offers the opportunity to visit places you will read about so why not get the live and in-person lessons? Especially when the days are warmer and longer.

Many of the 500 largest stock-market-listed companies are head-quartered in Germany, so if economics, or international relations, or business administration, Germany warrants consideration. It is a global leader in various industrial and technological sectors after all.

Germany is a destination for STEM (science, technology, engineering and mathematics) majors. The Nobel prize was awarded to 104 German laureates! Think of possibly studying in Darmstadt, home of the world's oldest pharmaceutical company Merck and officially called the "City of Science"

As a transport hub, Germany has set the standard in automobiles – think BMW, Volkswagen, Mercedez-Benz, Audi and Porche. If you aren’t going to drive, you will want to see Germany by train. The Bahn goes to many popular cities including Berlin to Frankfurt.

Using the navigation tools on StudyAbroad.com makes selecting a study abroad program easy. Search by any number of German cities, or a course specialty, depending on what you know about your schedule and interests. For instance, you could look into studying abroad in Frankfurt Am Main over the summer, walk the streets of Goethe... Want to study marine microbiology in summer? This is also a great way to get listings for Summer Study Abroad in Germany programs and visit this fascinating country.