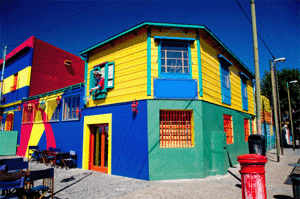 Buenos Aires is the hub of Argentina in almost all senses. It fulfills an extremely important role as Argentina's major port city. It is the center of the country's cultural, economic, industrial, and political life. The population of the city proper is almost 2.8 million while the area known as Greater Buenos Aires is estimated to have a population of over 12 million.

Tango is one of the cultural treasures born in Buenos Aires. This evocative dance form began around the end of the 19th century and by 1902 the Teatro Opera had begun organizing tango balls. By the 1920s this dance form became popular in Parisian high society and spread throughout the world from there. One of the singers who helped to popularize and refine tango music was Carlos Gardel. Today, Gardel is still highly regarded, even idolized, and thousands visit his tomb every year. Many will put a lit cigarette in the hand of the life-sized statue that stands over the tomb.

In addition to its famous tango music, Argentina has also given birth to a number of famous authors. Jorge Luis Borges is probably the best-known. He is famous for his short stories and essays and also wrote poetry and criticism. Other significant writers include Adolfo Bioy Casares, Ernesto Sábato, Victoria Ocampo, and Julio Cortázar. The University of Buenos Aires is one of the most prestigious universities in South America and has produced five Nobel Prize winners.

The population of Buenos Aires is incredibly diverse. The majority of the Argentines of the city are of Spanish or Italian descent. However, there are also significant communities of people of Arab, Jewish, Armenian, Anglo-Irish, Chinese, Japanese, and Korean descent. The Buenos Aires population also contains a minority of mixed Spanish-aboriginal heritage.

In many ways, the architecture of the city is far more reminiscent of Europe than much of the rest of South America. Perhaps the most famous building in the city is the Casa Rosada (Pink House), which is the official seat of the Executive Branch of the country's government. The Casa Rosada is located downtown on the Plaza de Mayo - the city's main square. Wandering around the square you can see many of the city's other famous buildings including the Cabildo, which housed the city council in earlier times, the current city hall, and the Metropolitan Cathedral.

One of the most popular pastimes in Buenos Aires is football (soccer to US readers), whether people are playing or watching it. Popular teams include the Boca Juniors, River Plate, San Lorenzo de Almagro, and Vélez Sarsfield. Horses are extremely popular in Argentine sports and you can find horse racing, polo, and pato. Pato is similar to basketball only on horseback and the Argentine Congress declared it Argentina's national game in 1953. Regular basketball, tennis, rugby, and field hockey are also popular.

Buenos Aires is a diverse, multicultural center with a proud history, fascinating culture, and influential economy. Studying in this Argentine gem will provide you with excellent opportunities to immerse yourself in a new culture among people speaking a different language while exploring a complex, yet welcoming, city.