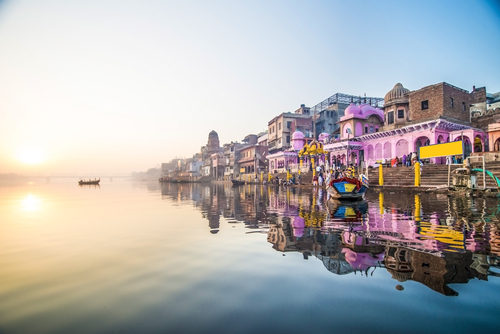 Considering an internship adventure in the Republic of India? This large and vibrant nation is not just a destination for tantalizing food, ancient treasures, or spiritual practices like yoga. It may also be an amazing location for exploring fields like business, technology, politics, and even the arts! With over 1.2 billion people, India has the world’s biggest democracy and English is one of its official tongues, meaning you might find plenty of people who speak your language. If you’re hoping to gain insight into a professional area while potentially experiencing an axis of history and culture, it’s time to learn more about internships in India!

Don’t be fooled into thinking India is an old-fashioned country because of its ancient traditions that make it a culturally-rich destination; it is also one of the world’s fastest-growing economies! Though India notoriously struggles with poverty, this country has booming telecommunications, automotive, information technology (IT), and pharmaceutical sectors. And India’s film industry, affectionately known as “Bollywood,” produces more films each year than America’s Hollywood!

If you’re hoping to discover a taste of an industry before going into it, India may be a fascinating place to do so. Perhaps you could seek India internships in areas like international business, technology, engineering, fashion, or another dynamic sector!

How should you prepare for internships in India?

Pursuing an internship in India may be a great opportunity to learn about a professional area, enhance your resume, and meet inspiring experts. Of course, interning abroad can also be challenging – particularly if you plan to live and work in a culture that’s quite different from your own. Since India is a nation of contrasts, you may meet new friends who act and dress a lot like you, as well as those who observe cultural practices you’re unfamiliar with. For many, that’s part of what makes India such an exciting place!

It may be helpful to do as much research as you can about India, including its history, business and social etiquette, and modern challenges like poverty. Check with your doctor to see what vaccinations are recommended, and be aware of travel recommendations for certain areas – like drinking only bottled water or protecting yourself from mosquitoes. With some planning and preparation, you just might have an internship experience to remember forever!

Where should you live and work?

If you’re considering an internship in India, you may be faced with a tough choice: where to live, work, and have fun! India is a very large federation with 29 states and 7 union territories, each with unique features and industries. Here are just a few areas where you might consider pursuing an internship:

Mumbai – If you’re passionate about business, technology, or film, Mumbai may be the perfect destination! This coastal city hosts the Bollywood film industry, as well as the most millionaires and billionaires in India. It is also India’s financial and commercial capital, and an important cultural center.

Delhi – Delhi is the National Capital Territory of India, as well as the country’s political center. New Delhi, the capital city, is located here. Key industries include IT, telecommunications, and tourism. And Agra, home to the must-see Taj Mahal, is a popular daytrip from this region!

Jaipur – This lovely desert city is known as “The Pink City of India” due to the pink stone used to build its many elaborate structures. But in addition to being a key historical center and tourist hotspot, Jaipur has thriving IT, textiles, and arts industries.

Travel tip: While in Jaipur, stroll the courtyards of the 16th-century City Palace, which is still a working royal residence!

Kolkata – Formerly known as Calcutta, this megacity is located in West Bengal on the Hooghly River. Kolkata is home to the Calcutta Stock Exchange and serves as the financial center of East India. Some major industries include IT, steel, heavy engineering, and textiles. Plus, it is considered to be India’s literary and educational capital, as well as its most creative and intellectual city!

India could also be the perfect place to pursue experience in areas like anthropology, history, and cultural studies. It is the birthplace of major world religions like Hinduism and Buddhism, plus home to practitioners of uncommon religions like Zoroastrianism and Baha'i. And if you’re interested in ancient civilizations, India is full of fascinating ruins and sites, like the Qutub Minar and the planned city of Lothal, which dates to 2400 BCE.

Just as worthy of your attention is modern life in India. Though it has evolved by leaps and bounds, the nation still struggles with issues like poverty, educational inequality, and lack of access to healthcare. If you’re interested in working to solve urgent social problems, you might be able to make a difference in India.

Did you know? India has 122 major languages, plus nearly 1,600 other languages. However, around 90 million Indians speak English.

From mountains to deserts

India is home to incredible biodiversity. You could potentially watch the sun set over the arid deserts of Rajasthan, enjoy a trek in the snow-capped Himalayas, or stroll the white sand beaches of Goa. This nation is also home to 70% of the world’s tigers, a treasured population that is nonetheless threatened. If you’re contemplating a future career in biology, environmental science, or conservation, exploring India diverse ecosystems could be a life-changing experience!

Below, check out some sponsored listings for internships in India that may be perfect for you!