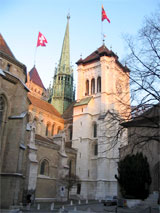 For those interested in pursuing research in a science or technology field, studying abroad in Geneva arguably provides the richest and most challenging atmosphere in the world. The city is home to some premier research and development laboratories including Du-Pont-Nemours, Serono Pharmaceutical Research Institute (SPRI), STMicroelectronics Design Center, IBM Center for Telecom Applications, and many more. Geneva can also boast many of the best-known names in technological institutes and centers including the Swiss Federal Institute of Technology (EPFL), MIRALab (virtual reality, computer animation, telecooperative work), and the Swiss Institutes of Bioinformatics and Proteomics.

However, out of all the research facilities in Geneva, CERN is probably the best known. Founded in 1954, CERN (the European Organization for Nuclear Research) was one of Europe's first joint ventures and has developed as the world's largest particle physics laboratory. Physicists from around the world travel to CERN to research matter and explore the fundamental forces and materials that form the world.

In addition to being a research center, Geneva is also a center for international businesses. There are 24 intergovernmental organizations, 130 NGO's, 165 diplomatic missions, and the headquarters of 125 multinational companies. Geneva also has a history of social activism and was the founding place of the International Red Cross. It was also the historic headquarters for the League of Nations, and today is home to the largest United Nations Office outside headquarters in New York.

The international flavor of Geneva extends to its population with over 40% of those living there being foreigners. The city welcomes those from diverse backgrounds and understandings and promotes cultural cooperation in its universities and workplaces. With that come the perks of an international community such as 1,200 restaurants featuring one of the greatest varieties of international food anywhere.

Geneva also boasts that it is one of the most livable cities in the world. The city claims to have the shortest commuting time in the world along with affordable, excellent public transportation, and one of the three best airports in Europe. Equipped with excellent business centers and hotels as well as a fantastic fiberoptics network, it is not hard to see why so many people have chosen Geneva as the place to live, study, and work.

Interestingly, Geneva's best-known icon is probably the Jet d'Eau - the world's tallest fountain. The fountain can shoot water into the air with a force of 1360 horsepower to form a stream 469 feet high. This means that at any given time the fountain has seven tons of water in the air. With the technological expertise that one would expect of Geneva, the city takes water, one of the most fundamental elements on the planet, and uses it to create a unique and lasting impression that can represent both the innovative spirit as well as the strength and beauty of Geneva's history and culture.