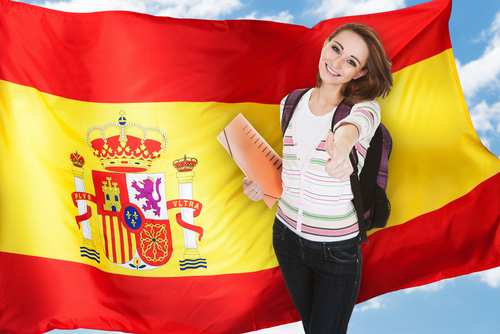 Why Study Spanish in Spain?

Immersing yourself in your language studies might mean stepping outside of the classroom and exploring the world. Why study Spanish in Spain? What could be a better way to learn Spanish than practicing it daily while engaging and conversing with native speakers? Of course, getting a comprehensive education may mean traveling throughout the entirety of Spain too. (At least, that’s what it should mean!) Whether your perfect program runs for a few weeks, a semester, or an entire year, learning Spanish in Spain could be a great way to potentially improve your language capabilities in a way textbooks might not. It’s time to say hasta luego to your college or university and hola to an adventure in Spain!

Choosing to study Spanish in Spain could give you the unique opportunity to fully immerse yourself in your language education. Imagine hearing Spanish almost anywhere you go. Now, imagine being able to understand it thanks to your study abroad program! Intensive language courses typically focus on developing your skills and knowledge of the language in the classroom. Then it’s time to take your new skills outside and practically apply them in a way an academic course might not! Whether you’re studying, in a restaurant, or hanging out in your dorm, you may be completely submerged in the language. What a great way to test your speaking capabilities! Maybe by the end of the program you might even be confused for a native speaker!

Taking your language studies to España may also allow you to learn some different dialects. For example, the Catalan Spanish dialect differs greatly from the Castilian Spanish typically taught in many universities in Spain and foreign countries. By traveling, you could have the chance to hear Catalan spoken daily and maybe even pick up a few words. This is a great way to explore Spain and sneak in a little learning. Or, you might visit Barcelona and hear the famous “Barcelona Lisp.” The distinctive accent is unique to the city and could be interesting for students who want to flesh out their Spanish education. Of course, there’s plenty of regional language differences and slang terms to learn as well. For example, “Qué guay!” means “How cool!” You may use that phrase a lot – especially when you’re out exploring some of the activities and sites listed below.

Spice Up Your Spain Experience

When you think of Spain you probably imagine bull fighting, flamenco, and passionate tango dancing. While these are all elements of Spanish culture, there’s many more things to explore than just that! And it’s hard to talk about Spain without mentioning the food. You could skip it, but then you’d be missing out on a huge part of its culture!

Tapas are a great way to eat a lot of Spanish food, for a relatively cheap price. Tapas are small plates that are similar to appetizers. Except, in Spain, you order many plates and share them with your entire party. It’s not uncommon for groups of people to flock to the nearest tapas bar before siesta or after work. Why not join them? You could start with a plate of gambas al ajillo, better known as prawns cooked in olive oil with chili peppers and garlic. Or, queso con membrillo which is cheese layered with a paste made of quince, lemon, vanilla, and sugar. There’s always more than enough pulpo a la gallega to go around – so why not try some octopus? In the beginning, you might get tricked into some adventurous eating. But you may not need the names translated after a semester of learning Spanish in Spain!

Though the food is delicious, you should also get out and experience the multitude of sites and activities that Spain has to offer. You could visit the Alhambra, a sprawling castle-fortress in Granada, Spain. Originally constructed by the moors, the site later became the location of the royal court of King Ferdinand and Queen Isabella in 1492 BC. Or, if you’re more interested in ornate architecture, you might want to check out some of Spain’s unique cathedrals like the Basilica of the Sagrada Familia in Barcelona or the Mezquita Cathedral de Cordoba in Cordoba. Both structures display influences from Spanish history, such as the Moors and Visgoths.

These are just a sampling of what Spain may have to offer. Each city boast their own unique history – and cultural traditions – so be sure to ask your university if there are any events or festivals exclusive to your area! By doing a little research, you could have the Spanish adventure of a lifetime.

Hop on a Plane to Learn Spanish in Spain

It’s time to say hasta la vista to your college or university and head out on an adventure to study Spanish in Spain! To find a perfect way to study Spanish in Spain, scroll further down this page to a view a list of available programs. You can also filter your list by selecting a city in the menu bar. To find out more about a program, click the appropriate link and select “request info.” Your perfect program could be only a few mouse clicks away. Buena suerte – that means good luck!