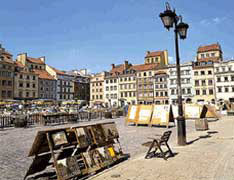 Poland is like the quiet child in a vast European family, overshadowed by its glamorous French and German siblings, not to mention upstaged by its fierce Russian or Slavic neighbors. Never one to hog the limelight, Poland is an understated, charming balance of brains and beauty, as well as style and substance.

So why, exactly, should you study abroad in Poland? For one, it's easy on the eyes. If you define your campus not by a classroom itself but natural surroundings, Poland is a school away from school as well as a home away from home. With 23 national parks, and countless primeval forests, estuaries, chalk cliffs and limestone caves, Poland has a natural beauty that is as utilitarian as it is aesthetic. For one, in Poland you'll never worry about dehydration. With almost ten thousand closed bodies of water, Poland has one of the world's highest numbers of lakes (in Europe, it's second to Finland). To its south, the Tatra Mountains are reminiscent of the better-known Alps. Rurally, students escaping from the city can enjoy every bit of Poland's unpretentiousness charm.

But beauty only goes skin deep, and there's plenty for a student to learn vicariously while studying abroad in Poland. Behind Poland's scenic beauty is a history as significant as it is ugly. During World War II, Poland had Europe's largest Jewish community of nearly 3.5 million. This socioeconomic statistic is why three of the most infamous concentration camps, each claiming over 600,000 lives, are imprinted forever in our memories: Auschwitz-Birkenau, Treblinka and Belzec.

The persecution didn't begin then. During mid-10th century, Poland was ruled by Mieszko I under the Piast dynasty. But for 1,000 years afterwards, Poland was ravaged by conquerors, invaders and the genocides. Seventy percent of concentration camps during WWII were located in what is now Poland. The flag of Poland is a white eagle against a red background, but it could very well be a phoenix against a backdrop of blazes. Poland's history is as troubled as it is triumphant - for 1,000 years since, it has been ransacked, invaded, and threatened by genocide. Yet in each chapter, Poland rises from the ashes each time.

Whether you want to study abroad in Poland for business, history, international law or art, there's something for you in Poland's ever-evolving history. Flash forward today: Wounds still fresh, Poland is rising higher. With cities like Krakow and Warsaw booming with jobs, investments, skyscrapers and real estate, both study abroad students and tourists are taking notice. Since the early 1990s, Warsaw has become a vast centre of business and culture for the country, and thousands of new flats and luxury apartments usher in denizens who live, work, play in the city. Krakow is considered to be one of the leading scientific, cultural, and artistic centers of the country, and once served as the residence of the king and as the national capital. It's also a major center for international tourism, with seven million visitors a year (some study abroad students) adding to Krakow's 1.4 million residents.

Public transportation and waste treatment plants are also signaling progress in the city. Each year sees the opening of new hypermarkets and shopping centres. Industrial facilities in the automotive, electronics, and food-processing sectors have been undergoing refurbishment'

In short, Poland is a lesson in regeneration, and that's what makes it an ideal country to study abroad. For one, the national determination to amend its past of persecution offers plenty of benefits to its visitors. You'll enjoy freedom of expression, religious freedom and multicultural sensitivity regardless of race or creed. Poland joined North Atlantic Treaty Organization (NATO) in 1999, while it became a member of the European Union in 2004. The year 1989 saw Poland holding its first free elections, in more than 40 years.

A history of persecution didn't stop many famous Polish artists, scientists and intellectuals from carving out Poland's cultural identity during the 16th Century. So, as a modern day study abroad student, where exactly can you find 'culture' in Poland? If you enjoy good cuisine, you can find it in peirogi (Polish dumplings stuffed with mashed potatoes, cheese, cabbage and meats). If you enjoy novel languages, you can hear it in Poland's primary language of Polski.

You can find it in many arts and science historical centers, for Poland is rich creative and intellectual thought. You can find it in a brilliant Chopin piano score, sonata, etude, polonaise or mazurka. If you have an interest in the sciences, you may also find it in the Sun itself. While Poland isn't the center of the universe, famed Polish astronomer Nicolaus Copernicus is the center of Poland's celestial celebrity circle. He earned his doctorate in canonical law while studying throughout Poland, developing the solar system's heliocentric theory. Also foremost in Polish scientific circles is Polish Nobel Prize winner Marie Curie, who along with her husband Pierre Curie discovered polonium and radium while living in France.

Hardly secluded from its European neighbors, Poland's long friendship with France during the 18th and 19th centuries has resulted in many Polish artists and intellectuals moving to Paris. If you're an expatriate interested in studying in a country that welcomes persons of different citizenships, ideals, and schools of thought, Poland is your best bet for a safe, enriching and intellectual environment to pursue your studies abroad.