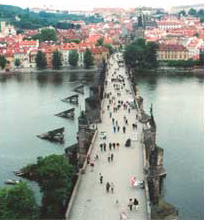 It has been said of the city, 'Prague never lets you go... this dear little mother has sharp claws.' One of Prague's greatest literary figures, Franz Kafka said this of his city, and those who spend any amount of time here quickly realize why.

Frequently called Golden Prague, the capital of the Czech Republic retains much of its medieval glory and charm. While large portions of Europe were heavily scarred by war, Prague remained comparatively untouched and the stunning cityscape proves it. One of the most popular destinations is Prague Castle, the largest ancient castle in the world. It was constructed by Prince Boøivoj in the 9th century and has seen many improvements, expansions, and changes since then. The castle is the centerpiece of Prague, the seat of the government, and a depository of artistic accomplishments and architectural marvels.

In addition to the stunning architecture of Prague Castle and many of the city's other historical buildings, Prague also has a more mystical and mysterious side to some of its buildings and decorations. One of the best-known statues in Prague is the Golem in the Jewish quarter. There is an old story related to the Golem that it was created by Rabbi Löw in the 16th century in order to protect his people. According to the legend, the Golem may still be protecting Prague today and the statue stands as a reminder of this famous figure.

Prague is more than history and legends, however. Today's arts and cultural scene is extremely vibrant and active with countless art galleries, festivals, concerts, musical performances, poetry readings, museums, and more. The active social life available to students in Prague is a mixture of young Czechs coming to the city as well as a varied group of students and young people from around the world. While some complain that the influx of people is destroying the charm of Prague, the city clearly maintains its traditions while integrating the modern.

The 1990s saw the end of communism in the Czech Republic, and Prague has become an increasingly popular tourist destination since then. In the midst of this revitalization, Prague is also beginning to reemerge as one of the leading centers of culture and thought in Europe. Throughout its history, Prague has acquired a number of nicknames including, 'city of a hundred spires', 'the golden city', 'the Paris of the Twenties in the Nineties', the 'mother of all cities', and 'the heart of Europe'.

Whether you come to Prague to experience the romanticism of the Czech Republic's golden city, learn from the history and cultural richness of its past, or enjoy the vibrancy of its present and the bright promise of its future, Prague is sure to deliver what you seek