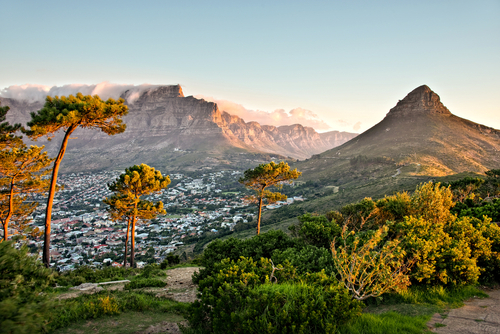 South Africa beyond the classroom is a land of sun, sea, culture, wildlife and experiences beyond compare. There is a lot to learn about South Africa while you’re there.  South Africa, which is the southern-most nation in Africa, is bordered by Zimbabwe, Namibia and Botswana.[i] Typically temperate, the country can have some extremes from the country’s Garden Route, home to vineyards to the blustery areas of the Cape of Good Hope, which caused many shipwrecks for those who tried to sail past the choppy waters.

Fun fact: There are 11 official languages in South Africa.

Art history students might like to study the sandstone cave drawings of bushmen, which are thought to be 100,000 years old, in a South African cave. For more modern art students, there is plenty of contemporary South African art to learn from including the post-apartheid works of William Kentridge, who is famous for his prints, drawings and animated films.

Biology students could check out the indigenous flora and fauna of the Cape Floral Kingdom region of South Africa. This landscape is one of the most diverse in the world, home to 9,600 recorded plant species. As many as 70 percent of those species are found nowhere else on the planet.

Safaris can be pricey – upwards of $800 to $1000 per night. But not to worry, there are many opportunities to see wildlife that is more feasible on a student budget, such as the Cape of Good Hope Nature Preserve and other wildlife reserves near city hubs, where fulsome full degree programs are immersed in.

Did You Know? South Africa’s oldest university is University of Cape Town. It was founded in 1828. Their mascot is a tiger.[ii]

History student may find interest in studying the history of apartheid, the segregation of races, which occurred until 1994. Johannesburg is South Africa’s capital and has a rich history in the gold and diamond trade. Commonly called “J-Burg,” it is a prosperous city and the financial hub of South Africa.[iii] There are many museums to explore, including the Mandela Museum, the former home Nelson Mandela.

Culinary students or budding sommeliers can soak in South Africa’s wine culture, which dates back to the 1600’s. South African wines are finding their way to tables across the globe. Surely, you’ll find the right local vino to pair with the country’s cuisine, which varies from the colonization and immigration influences on the food. In other words, when it comes to mealtime, prepare for a spice sensation.

The first step of an enriching, fulfilling full degree program experience in South Africa is getting help finding the right program. Get started at /full-degree-in-south-africa.