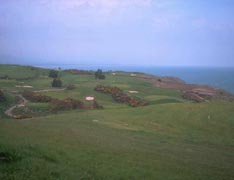 The Beauty and History of Northern Ireland

Few places in the Western world have as sad and complicated a history as Northern Ireland. This is unfortunate, for beneath that reputation lays a country whose beauty and charms should be far more famous throughout the world. Because within this relatively small section of land, Northern Ireland is a country whose rewards are second to none, whose cultural life has given the world some of its finest writers, and whose natural landscape takes away the breath of anyone lucky enough to see it firsthand. Students that study abroad in Northern Ireland come away with a new appreciation for the beautiful land and rich culture.

Though Northern Ireland was the site of one of the most complicated, intractable disputes in the world, recent years have seen the reduction of tensions and the return of a real sense of normalcy to the country. As a result, tourists and students can once again take full advantage of this beautiful and enriching part of the world.

The area itself is not terribly large: It only covers 5,459 square miles in the northeast of the island of Ireland, about a sixth of the total area of the island, and has a population of 1,685,000 (April 2001) - between a quarter and a third of the island's total population.' But within this corner of the island are some of the most ruggedly beautiful landscapes in the entire United Kingdom. The combination of the regularly rainy weather, the relatively moderate temperatures, and the rolling pastures that Northern Ireland is famous for have 'resulted in much of the region being covered in rich green grassland.' One look at these rolling fields and you'll instantly understand why Ireland is often referred to as The Emerald Isle.

But Northern Ireland has much more to offer than natural beauty: The importance of the cultural contributions its natives have made to the world are impossible to overstate. In literature, the Nobel Prize-winning poet Seamus Heaney was born in Northern Ireland, as were C.S. Lewis (The Chronicles of Narnia) and the poet Paul Muldoon. Liam Neeson and Kenneth Branagh are both from Northern Ireland, as is musician Van Morrison. One could legitimately argue that the artistic achievements of these and other Northern Irishmen are second to none, and the world as we know it today would be a very different place without the benefit of their contributions. Many students majoring in literature choose to study abroad in Northern Island because of its rich heritage.

Tourists and students can also take advantage of the local culture that is accessible to all who visit and live in Northern Ireland. Some of the most beautiful castles in the United Kingdom are found in Northern Ireland, including Dunluce Castle and Harry Avery's Castle. It is possible to spend hours wandering the halls and galleries of the Ulster Museum, which features a 'visual feast of fine and decorative arts-from Irish, British, and international paintings and sculptures to stunning displays of glass and ceramics as well as international touring shows. Discover the richness of the heritage in the unfolding story of the north of Ireland and its people from as far back as the end of the Ice Age.' Or simply wander around the streets of Belfast, the largest city in Northern Ireland and home to some of the country's best restaurants, pubs, and urban culture.

Students, however, even more than the tourists passing through, will reap the rewards of living in this magnificent country for all four years, or at least a portion of college. Indeed, between the history, culture, and institutions of higher learning like Queens University and the University of Ulster, students with an interest in history and a fascination with some of the most exciting arts and music scenes in the world would do quite well to consider study abroad in Northern Ireland and attending college in this complex, beautiful, and ultimately rewarding country.