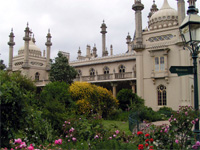 Located on the southern coast, approximately an hour from London, this lively city is one of the largest and most famous seaside resorts in the country. Often referred to as 'London by the Sea,' the cosmopolitan city has the same multicultural population that London boasts, but within a much smaller and more easily navigable area. With a population of almost 250,000, however, Brighton inhabitants have been known to get their digs back by calling London 'Brighton by the land'.

Brighton has two major universities - the University of Sussex and the University of Brighton - both of which offer excellent academics. These two large universities contribute to a significant student population in the city, assuring that international students will quickly feel right at home with other students from around the world. It is particularly popular with international students from all over Europe who descend on the city by the thousands during the summer to take language courses.

Interestingly, Brighton is considered fairly progressive and is the focal point for various political movements and activities. For example, a far greater number of people, approximately 20% of the city's population, vote for the Green Party as compared to 1% across the United Kingdom as a whole.

In addition to lively politics, Brighton is also well-known for its vibrant arts scene. Whether you're lounging at a pavement cafe or dancing through the night at one of the city's famous clubs, the energy of the city is contagious. Brighton's lively music scene has given birth to many successful bands such as Fatboy Slim, The Love Gods, and Johnny Truant and is home to a number of record labels.

Brighton is an excellent location for travel. France is just across the Channel and Brighton makes a great starting point for visiting London, Canterbury, Bath, and a number of other fascinating places throughout the United Kingdom.

Brighton itself has many exciting things to see. The Brighton Festival offers a 3-week celebration in May of all that's good in British and international performing arts. The Festival both highlights the accomplishments within Brighton's creative scene as well as drawing a number of acts and events from elsewhere in the UK and the world.

The Brighton Pier originally opened in 1899 and has been popular ever since. The Brighton Royal Pavilion is possibly the best example of the flamboyance that makes Brighton so dissimilar to most of the rest of England. Decorated in lavish style, the Pavilion's sumptuous decor is heralded by the Moorish/Indian styled exterior. Other worthwhile stops include The Lanes, The Sussex Downs, the Duke of York cinema, and some of Brighton's fine beaches.

Brighton offers you an energetic city with two excellent universities and more than enough to keep you busy when you're not studying. Nowhere else in the country will you find such an entertaining and exciting destination.