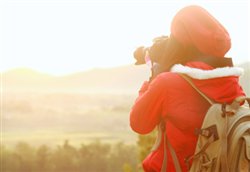 Vienna can be an exciting place to live and study, and many students from around the world choose to study abroad in Vienna, Austria. There they take part in its culture, visit its landmarks, and learn about its rich European history. With fourteen universities and nine international schools within the city, students may have the opportunity to study abroad in Vienna at participating universities and academies and experience the distinct culture of the city.

Vienna, the capital city of Austria, is located on the northeastern coast of the country, nestled between the foothills of the Alps and the Carpathian Mountains where the Danube River cuts through. Much of Vienna is situated on the bank of the Danube and, in ancient times, the city served as a stop on many trade and military routes. Because of its location east of the mountains, the city experiences warm winters and cool summers. The city is divided into 23 districts, or Bezirke, and district I is where most of the city’s famous structures are located.

The official language of Austria is German, but the northern part of the country which includes Vienna also speak Wienerisch, the Viennese speech and accent, which demonstrates that the Viennese have history under the governing of Romans, Spaniards, French, Italians, Magyars, and Slavs. The language also includes words with origins from Turkish and Yiddish but which have been adapted into the German tongue.

Cost of Living in Vienna

Vienna, like the rest of Austria, uses the Euro as its currency (represented with this symbol: €). As of March 2015, one Euro was equal to $1.06 in US dollars.

If you’re looking to study abroad in Vienna, accommodation (if not provided by the study abroad institution) may be one of the biggest costs you face. For example, it costs about €1,365 to rent a 900 square foot furnished apartment in an expensive area, with utilities (heating, electric, gas) maybe adding up to approximately €120 per month.[ii]

Living expenses while in Vienna will also include food, transportation, entertainment and miscellaneous costs. Food costs are comparable to those in metropolitan areas of America, with a pound of boneless chicken breast costing about €4.75 and a quart of whole milk costing around €1.09. A monthly transportation pass comes in at approximately €46 and a five-mile taxi ride might run about €15. Other costs for clothes, eating, and entertainment, will all depend on how expensive your taste is!

Vienna serves as the definitive cultural hub of Austria, rich with influences from surrounding countries like Germany, Hungary, and Slovenia. It is also one of the world capitals of music, with many orchestras, operas, and concerts representing Vienna in world famous music celebrations around the world.

Vienna is also home to many historic landmarks and museums, including Albertina (graphic arts), Kunsthistorisches Museum, the Academy of Fine Arts with many exhibits, and museums of natural history, military history, ethnology, and technology. While you're abroad in Vienna, you may want to visit the catacombs of St. Stephen's Cathedral or the houses of world-renowned composer greats such as Mozart, Beethoven, Shubert, and Johann Strauss.

While extravagant balls are much a thing of the past, Vienna hosts over 200 significant nineteenth-century balls each year, many of them featuring several live orchestras and often lasting until well into the morning hours. If you feel like taking a walk through some beautiful scenery, the city features many parks throughout the city, including the Vienna Botanic Gardens, Stadtpark, the Burggarten, and the Volksgarten (part of Hofburg), featuring statues commemorating the city’s history.

At the Naschmarkt, you’ll find spices, fish, meat, vegetables, and fruit from around the world, as it is a permanent staple in the city. The city also has vineyards where the most widely produced is a dry white wine called Grüner Veltliner. Some examples of traditional Austrian cuisine that can be found in most Viennese restaurants:

When you’re not studying, meeting new friends, or going for a walk in one of the many parks, you might want to try these activities while you study abroad in Vienna, Austria: