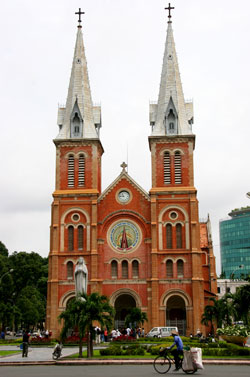 'Hô Chí Minh (May 19, 1890 - September 2, 1969) was a Vietnamese revolutionary and statesman, who later became Prime Minister (1946-1955) and President (1955-1969) of North Vietnam.' Ho Chi Minh City was originally named Saigon, and that term is still frequently used, but was officially changed in honor of the leader of the new communist government in 1975 when it merged with the surrounding province of Gia Dinh. This event is often called the 'Fall of Saigon' in America and the 'Liberation of Saigon' in Vietnam.

Until the end of the Vietnam War, Ho Chi Minh was the capital of a French colony, and its more than seven million residents live near the Mekong River delta on the banks of the Saigon River, 60km from the South China Sea.

Victim of a tepid past with a French flare, walking through the streets of Ho Chi Minh is a unique experience: 'the city's core is still adorned with wide elegant boulevards and historic French colonial buildings' while the air remains communist and the people act conservative. There are 95 elected deputies to the People's Council who choose the 13 members of the People's Committee that function as the principal local governmental entities. Two heads of that committee are the top governmental officials, but the Communist Party of Vietnam is still ultimately in charge of the country.