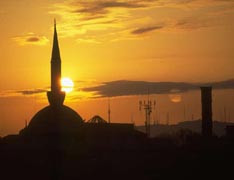 If you've never thought of study abroad in Turkey as a top location, think again! With tourism to this continent-straddling country increasing by nearly 20% year-over-year since 1993, student interest in studying in Turkey is rapidly growing, as well. With this increased attraction in recent years, Turkey's educational system has also been spotlighted as an optimal destination for studying history, politics, languages, sciences and more.

Ideally located directly between Europe and Asia, Turkey is the perfect destination for adventurous travelling students. After you've thoroughly explored the thriving metropolis of Istanbul, hiked the seemingly endless coastlines and visited the famous historical cities of Troy and Ephesus, a few short hours in the air headed east and you can visit China on spring break. To the west lie dozens of European countries perfect for backpacking students on a budget.

Turkey offers some of the most captivating architectural sites in the world, loaded with a completely unique mixture of European and Asian influences.

Much has changed in Turkey since the Ottoman Empire, when most schooling was focused on the Koran, and only males could attend classes outside the home. During this time-period, girls and women were only taught household skills and crafts, and only 10% of the population was literate.

Currently, there are nearly 150 colleges and universities in Turkey, and over 30,000 foreign students studying abroad there. Istanbul is the largest city in the country (and the fifth-largest in the world!), and offers students opportunities for learning at a dozen different universities. Many smaller cities also offer varied study-abroad options.

One popular course of study while in Turkey includes language. Turkish is the official language of the country, but there are also opportunities to learn the lesser-spoken discourses of Kurdish, Dimli and Kabardian.

If studying a foreign tongue isn't your cup of tea, don't worry! Most study abroad programs are offered in English. Here are some of the most popular areas of study:

Turkey is often considered a land of extreme climates, with temperatures ranging from enjoyably warm during the summer months on the Aegean and Mediterranean coasts to cold and snowy winters in the eastern portion of the country.

Your best bet for pleasant weather during your studies is to stick to schools on any of Turkey's coastlines, unless of course your idea of enjoyable includes thick parkas and frozen breath. If that's the case, than be sure to visit eastern interior Turkey during the winter months! There's also ample opportunity to experience the desert-like conditions near the Syrian border, with dry, arid temperatures and low-lying plains.

The arts, sciences and humanities that pulse throughout Turkey represent a storied and multicultural past, with a clear intention of integrating modern thought and influences into the literature, fine arts and architecture created here.

Early in its formation as a republic, Turkish leaders purposefully engaged artists, playwrights, musicians and sculptors to create some of their finest works in order to help the country create a cultural identity.

Since then, Turkey has enjoyed great success in developing a thoughtful and reflective environment for talented creatives to produce great works. In 2006 they celebrated the Nobel Prize-winning author Orhan Pamuk. More recently, Nuri Bilge Ceylen won Best Director at the Cannes Film Festival in 2008. Wherever your creative interests lead you, all corners of Turkey are sure to impress!

With dozens of schools offering programs in almost every area of scholarly interest, Turkey is a top choice for studying abroad. Whether you're interested in a Bachelor's, Master's or Doctorate degree, the international programs in Turkey will exceed your expectations. Go for a semester, or go for your entire college career!