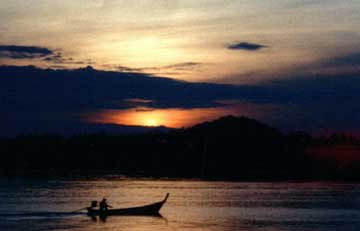 Thailand: The Land of Smiles

Look north to Burma and Laos. East to Cambodia, and south to Malaysia. To the southeast you’ll find Vietnam, and southwest, Indonesia and India. Thailand is certainly not lacking for interesting company, and is itself in no shortage of remarkable people, history, and culture.

Thailand is the 20th-most-populous country, with approximately 69 million people. That’s roughly less than a quarter the number of Americans (315 million) spread across the United States, but in just 5% of the land mass (their 198,000 square miles to our 3.79 million square miles). And while that may seem crowded to some, your study abroad experience is sure to benefit from the fascinating array of people you’ll meet.

As the vast majority of individuals in Thailand are Buddhist, you may encounter many temples, or wats, and sacred statues, or bots. Temples vary in size and design. Some may have assembly halls, bell towers, or cloisters. As a general rule of thumb, all have both the Phutthawat, an area dedicated to Buddha, and the Sanghawat, living quarters for monks.

A few notes of etiquette may help you: when entering worship areas, remove your shoes; respect those who have come to worship in the temple; akin to museums and other areas with precious artifacts, look but don’t touch; and do not turn your back or elevate yourself higher than the Buddha as a show of respect. Some monks speak English and welcome conversation with tourists—it’s a good way to learn more about Buddhism (if you’re so inclined) and glimpse into the wondrous lives of these religious men.

Why Do You Want to Study Abroad in Thailand?

In two words? The food. To keep your mind sharp for classes, it’s a good idea to keep your belly full. And no better way to do that by sampling anything from tom kha kai or tom yum goong, two flavorful soups, and som tum, a papaya salad, to pad thai, a favorite noodle dish, or yam nua, a spicy beef dish.

Beyond the cuisine, in Thailand you’ll find islands that rival those of Hawaii or the Caribbean. Whether looking for a quiet beach or a popular party spot, a few of these you may want to visit include Koh Lanta or Koh Phi Phi, both near Phuket; Koh Phangan, a favorite among backpackers in the south; or Koh Chang, near Bangkok.

Culturally, you have a wide variety of event options to choose from. Thailand festivals, like Loi Krathong (also known as Yi Peng), which celebrates fire and light in November, or Songkran, which is the Thai New Year and celebrated in April, present fantastic ways to absorb local customs. Or partake in a Full Moon party, which take place in the Thai islands each month. For shopping, visit the Bangkok Night Market, or call on Chiang Mai near the Ping River, touted at one of TripAdvisor’s “25 Best Destinations in the World” for 2012.

In most places you’ll want or be asked to remove your shoes, making it easy to understand why the go-to footwear in Thailand is flip flops. Locals typically can be found wearing breathable fabrics like cotton and linen due to our next topic: the weather. For climate, the best time to visit is during the U.S. winter months of November and February, which also coincides with the peak tourist season of November through March. Thailand is a tropical country, and can be quite hot during March through May. And though the rainy season gets a bad rap, it also provides cooler temperatures and a verdant landscape.

How To Get Where You Are Going

The flight to Bangkok Suvarnabhumi Airport is bound to be a long one no matter where you’re coming from, with most flights averaging 15 hours in length. Upon arrival you’ll note a diverse group of travelers, with flights coming and going from all over the world.  As common in any major city, you’ll be able to hail a cab or take the train, the Bangkok Skytrain, to your next destination, depending on which university you may attend.

Thai people are renowned for their smiles, and you’ll have the chance to see why—and flash many a smile of your own—during your study abroad program in Thailand.