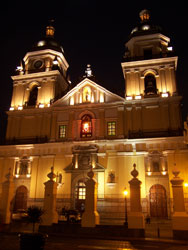 Almost a third of Peru's population - eight million people - live in Lima, Lima, making it one of the largest and densest urban concentrations in Latin America. It is also one of the most varying in ethnicity, with Spanish, Mestizo (mixed European and Ameridian ancestry), Asian, American, Italian and German residents. This makes Lima an ideal study abroad location for anyone interested in people or languages. It also gives Lima the largest concentration of higher education institutions in the country.

Universidad Nacional Mayor de San Marcos (the National University of San Marcos) is the oldest school in all of the Americans, having been founded in 1551. From that time, Lima has continued building high quality institutions, including the Universidad Nacional de Ingenieria, Universidad Nacional Federico Villarreal and Pontificia Universidad Catolica del Peru. If those words mean nothing to you, don't worry. Just know that they are top-notch centers of education, and that, due to the important and influence of Peru itself, they attract some of the best professors in the world.

When students need a break from class, they can relax on one of the many South American beaches or tour the lush green getaways for which this part of the world is famous. Of course, they can also keep learning. Lima's historic center was declared a World Heritage Site by the United Nations Educational, Scientific and Cultural Organization, and the city is home to Spanish colonial era buildings along with 16th century cathedral and catacombs, remnants of a medieval city wall built to defend the citizens from pirates and multiple museums showcasing things like ancient Spanish artifacts and weapons.

With its wealth of natural beauty and classic architecture, as well as its importance to the Americas and the entire world, Lima is an ideal study abroad destination for a summer, semester or year. Make the decision to study there today, and it will reward you for the rest of your life.