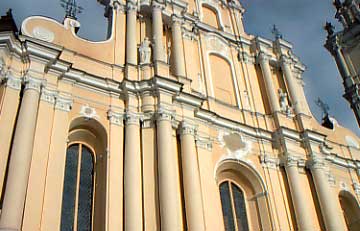 Why Study Abroad in Lithuania

The history of Lithuania in the 20th Century is one of the saddest in the world, but its tenure thus far in the 21st Century has not only been a happy one, but has been also a model of success for other countries in the region. There are many major options for students that wish to study abroad in Lithuania.

"In 1940, at the beginning of World War II, the Soviet Union occupied and annexed Lithuania in accordance with the Molotov-Ribbentrop Pact. It later came under German occupation during which around 190,000 or 91% of Lithuanian Jews were killed, resulting in one of the worst death rates of the Holocaust. Along with the retreat of the German army, Lithuania was re-occupied by the Soviet Union in 1944. During the Soviet and Nazi occupations between 1940 and 1954, Lithuania lost over 780,000 residents; with an estimated 120,000 to 300,000 of that number killed or exiled to Siberia by the Soviets, with others choosing to emigrate."

But with the fall of Communism in Europe and Russia, the fortunes of this small country on the Baltic Sea have turned around quite brilliantly. It joined the United Nations in 1991 and the World Trade Organization in 2001. "On March 29, 2004, it became a full and equal NATO member and on May 1, 2004, Lithuania joined the European Union." And now, it seems as if Lithuania is reaping all the rewards of its efforts to integrate itself into the fabric of modern western society.

Vilnius, Lithuania's capital, was founded in the 14th Century, and its natural setting along the Neris River is breathtaking. The city itself is beautiful, too. Indeed, "many visitors to the region tend to fall madly in love with Vilnius, pegging it as their favorite Baltic city of them all. As London's Sunday Times recently commented: "Vilnius may be the most underrated capital in all of Eastern Europe. Today, while the capital is seeing some of its fastest development, and as old town renovations pick up pace, it is thankfully not becoming too sanitized. Amid the winding cobblestone streets of the old city, you can still feel you've been transported back to the 12th or 18th century, depending on what street you happen to turn down."

Student Experiences When They Study Abroad in Lithuania

Many students find this city of just over half a million the perfect place to spend their college years: It not only is home to some excellent universities and colleges, but it also has a wonderful cultural life that has drawn students in since its independence more than 10 years ago. "Many artists live and work here; many varied [cultural] institutions offer a chance to see traditional art or listen to the music of the local and guest performers. There are a lot of museums in the Old Town," too, and students may take advantage of these and other top-notch cultural institutions to supplement their classroom education.

Outside Vilnius, the rest of Lithuania is simply breathtaking. Students can visit Trakai, "an ancient capital of Lithuania. Situated on the shore of the picturesque Lake Galve, on which boat rides are available, the city has a castle dating from the 14th century. Further to the west is the spa of Birstonas, renowned for its mineral waters and tranquility." Also of note is the city of Kaunas, which is home to innumerable museums, and the many other beautiful and fascinating towns scattered throughout the countryside.

The Language in Lithuania

The language, perhaps surprisingly, is related to Sanskrit. But those who speak and understand Russian will not struggle too much to learn how to speak it. Also making it easier is the fact that Lithuanian writing employs the familiar Roman alphabet, though there are a few additional letters and the typically European use of various accent marks that are not used in the English language.

As for academics, the University of Vilnius "is one of the oldest Universities in Eastern Europe and the largest University in Lithuania." Its professors and alumni have included such notables as the poets Adam Mickiewitz and Czeslaw Milosz. Present students will benefit from the same high level of teaching and classroom discourse that the university has always been known for.

All told, study abroad in Lithuania is likely to be a fascinating, rewarding experience. From the culture to the history to the sheer natural beauty of the country, you will find your life enriched by having spent you college years in this gorgeous country on the Baltic Sea.