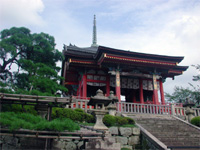 Today, Kyoto is one of the most visited and beloved of all Japanese cities. Located on the middle-western portion of the island of Honshu. Kyoto is considered the cultural center of Japan. During World War II when firebombing was conducted throughout the country, Kyoto and its 1600 Buddhist temples, 400 Shinto shrines, palaces, gardens and architecture were spared, leaving it one of the best preserved cities in Japan. The Kyoto area has some of the most famous temples, shrines, palaces and gardens in Japan. Students will certainly benefit from the fact that the history of this most modern and, paradoxically, ancient, of countries is on full display beyond every corner they turn and down every street they walk.

As for that past, students will find themselves enthralled by, for example, the 'Nishi Honganji, [which has been] designated as an UNESCO World Heritage Site [and] is the head temple of the Jodo Shinshu Honganji sect of Buddhism,' as well as any number of other Buddhist and Shinto shrines. So no matter how much history they learn in the classroom, the real-world experiencing of it is sure to reinforce their education in ways that are simply not possible back home.

Even the natural surrounding are breathtaking, as 'nature has enabled the inhabitants of Kyoto to find a variety of vivid colors in plants, such as flowers and trees, along with the transition of the four seasons. Surrounded by abundant nature'-'[the city] is surrounded on three sides by mountains known as Higashiyama, Kitayama and Nishiyama, with a height just under 1000 meters above sea level'-'Kyoto has cultivated its own unique culture and arts such as kabuki, geiko (geisha), temples and shrines.'

The culture of this city of nearly 1.5 million people is also truly spectacular, and the wide range of museums, restaurants, and nighttime entertainment are sure to pique the interest of students from all over the world who choose to study here. In fact, because of the wide range of high-end cuisine and the other rich culinary traditions, Kyoto is often referred to as 'Paris East.' And as we all know that the quickest way to a college student's heart is through his or her stomach, this is no small compliment of a nickname.

Learning the language, of course, often makes foreigners a bit nervous, but the fact remains that with just a few semesters of preparatory work in Japanese at your home school, you will be amazed by how quickly you pick up the language. Really, it's just a matter of allowing yourself to be immersed in it, and of giving the famously friendly people of Kyoto the chance to help you out with whatever linguistic difficulties you may be having.

In the end, Kyoto may be an even better place to study abroad than Tokyo, for while it is certainly smaller, it is also slower-paced. And because of that, students may well find themselves adjusting to Japanese life at a pace more appropriate to their personal needs. Plus, with food and history and a natural environment as spectacular as they are here, Kyoto simply has too much to offer to be ignored. Ikimasho!