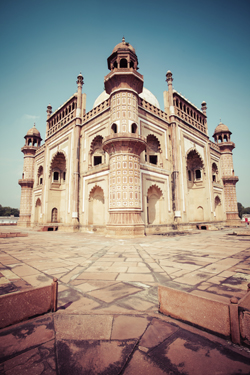 New Delhi is appropriately grandiose. As the capital of the world's second most populous country, it is an architectural, historical, and cultural wonder whose charms and frenetic energy are second to none. Located in northern India, it was home to countless earlier cultures as well as to the British Raj. Its history is long and fascinating, its present-day status and allure unquestioned. It is, indeed, one of the single most fascinating places a person can visit for a week or study in for a year. For no matter how long one is there, it is impossible to see and understand everything and even more difficult to depart unchanged.

New Delhi is part of the megalopolis known simply as Delhi, whose "metropolitan area, known as the National Capital Region (NCR) encompasses the entire NCT as well as the neighbouring satellite towns of Faridabad and Gurgaon in Haryana, and Noida and Ghaziabad in Uttar Pradesh making it the 5th most populous megalopolis in the world, with 19.5 million people". New Delhi is both the seat of Indian governmental power as well as a cultural mecca. Its combination of a burgeoning youth culture, a modernizing infrastructure, and reasonably predictable if varied climate all make it a real draw from tourists and students alike.

"In recent years, Delhi's service sector has expanded exponentially due in part to the large skilled English-speaking workforce which has attracted many multinational companies. Key service industries include information technology (IT), telecommunications, banking, media and life sciences. Delhi and its suburbs account for over 30% of India's IT and IT-enabled services (ITeS) exports - the second largest in the country (Bangalore accounts for 35%). Delhi's manufacturing industry has also grown considerably as many consumer goods industries have established manufacturing units and headquarters in and around Delhi ranging from Pepsico and Gap to zipper giant YKK".

Along with the growth it has seen in business and services, New Delhi has also experienced an influx of young people who either pursue an education at one of the city's excellent colleges or universities or hope to start a career with one of the many international businesses located there. Among the most highly regarded schools in New Delhi are Jawaharlal Nehru University, Indira Gandhi National Open University, and the All India Institute of Medical Sciences. But the educational opportunities are not limited to just these three, and, as one might expect, the variety of programs and the many degrees a student may choose to pursue are virtually infinite. And aside from these New Delhi-based schools, many American colleges and universities offer programs in the city, as well.

It is, however, with its ancient history and contemporary culture that New Delhi truly stands out. Whereas Delhi as a whole is famous for its past importance as centers of Afghan, Mughal, and British empires, New Delhi is more widely known for its role in modern-day India. Not only is it the capital of India, replete will all the expectedly grand government buildings, but it is also one of the cultural capitals of Asia. From the cinematic spectacles known affectionately as Bollywood to the delicious traditional cuisine spruced up in modern culinary clothes to the newly-popular Bhangra music being produced there and exported to clubs all over the world, New Delhi is just as much a treat for the senses as it is for the intellect.

In all, New Delhi provides an unrivaled combination of history, excitement, and potential for education both inside and outside the classroom. It is the kind of city that will likely change the way you see the world and make you a more interesting, more well-rounded individual. Isn't that what study abroad is all about?

Businesses, too, have been attracted to New Delhi, and this has led to a general increase in the quality of living experienced by its residents.