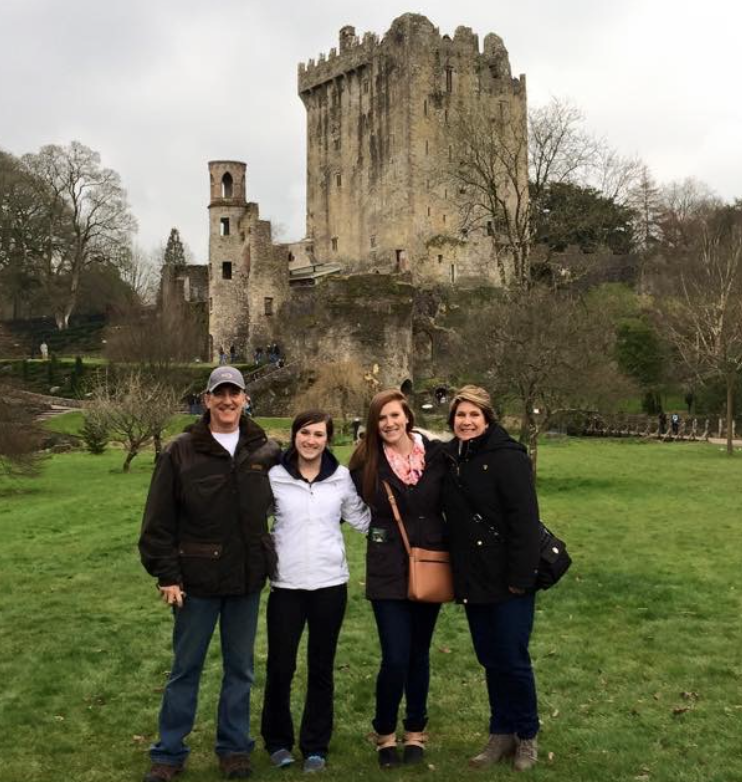 The month of March has been all about exploring the beautiful country I have been living in for the past two months. I've had visitors along the way to go on these adventures with, and this past week I was lucky enough to have my family along with me. I took them to a few places I had already been, the must-sees of Ireland, Blarney Castle, the Cliffs of Moher, and Connemara and Kylemore Abbey. But I also was able to travel to new parts of the country I would not have seen otherwise (thanks to Dad's need to have his own car despite having to drive on the other side of the road). My mom's family is where my Irish roots are. My Nana is 100% Irish; her parents actually met on the boat coming over to America from Ireland when they were just 16 years old. Griffin and Sullivan were their surnames and they came from County Kerry. 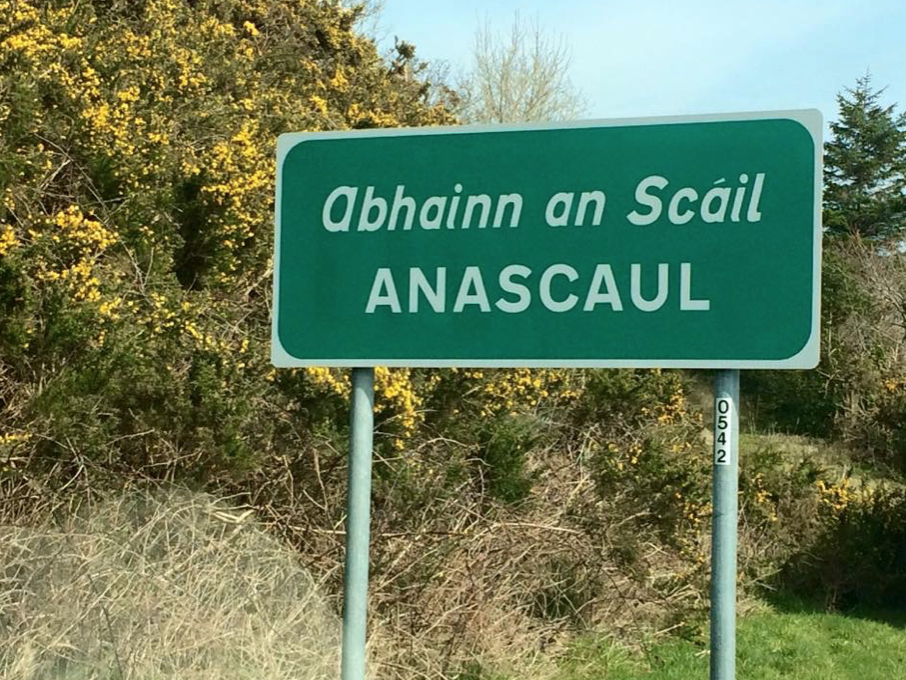 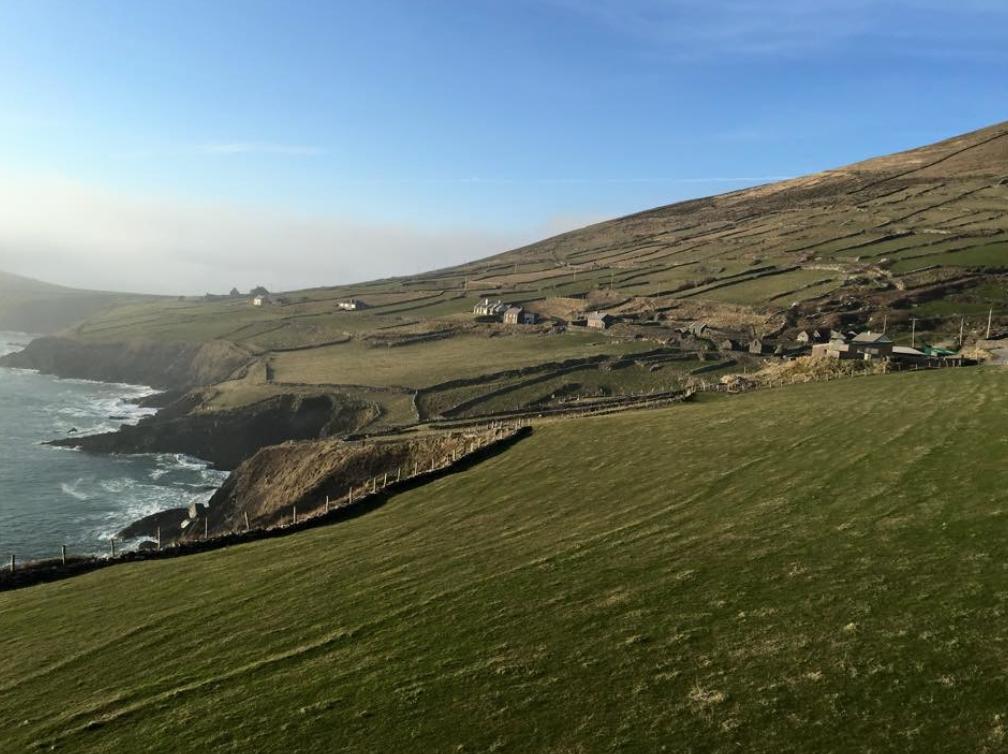 The town of Annascaul in the heart of the Dingle Peninsula of County Kerry is most famous for being the birthplace of the Antarctic explorer Tom Crean. But, it is also the birthplace of my Great Grandmother, Ellen Griffin. The town has one main road with a gas station, a bank, a post office, one bed and breakfast and three little pubs. It isn't much, but it is the place of my ancestry. After our 2 minute drive through downtown, we decided to off-road a bit and go find the Annascaul Lake. There really wasn't much to the lake, but what we did find down that road was an old cemetery. Many of the tombstones were so old that they were no longer legible. But, one of the few that you could still make out GRIFFIN written across the top. I had chills walking through there; it’s crazy to think that there are ancestors of mine who have walked that very ground a hundred or more years ago that I was then walking on. We began our drive out of the village and toward the town of Dingle. My great-grandmother had always told my mom that her house had sat along the road from Annascaul to Dingle; there were only three, and one of them must have been the house Ellen grew up in. 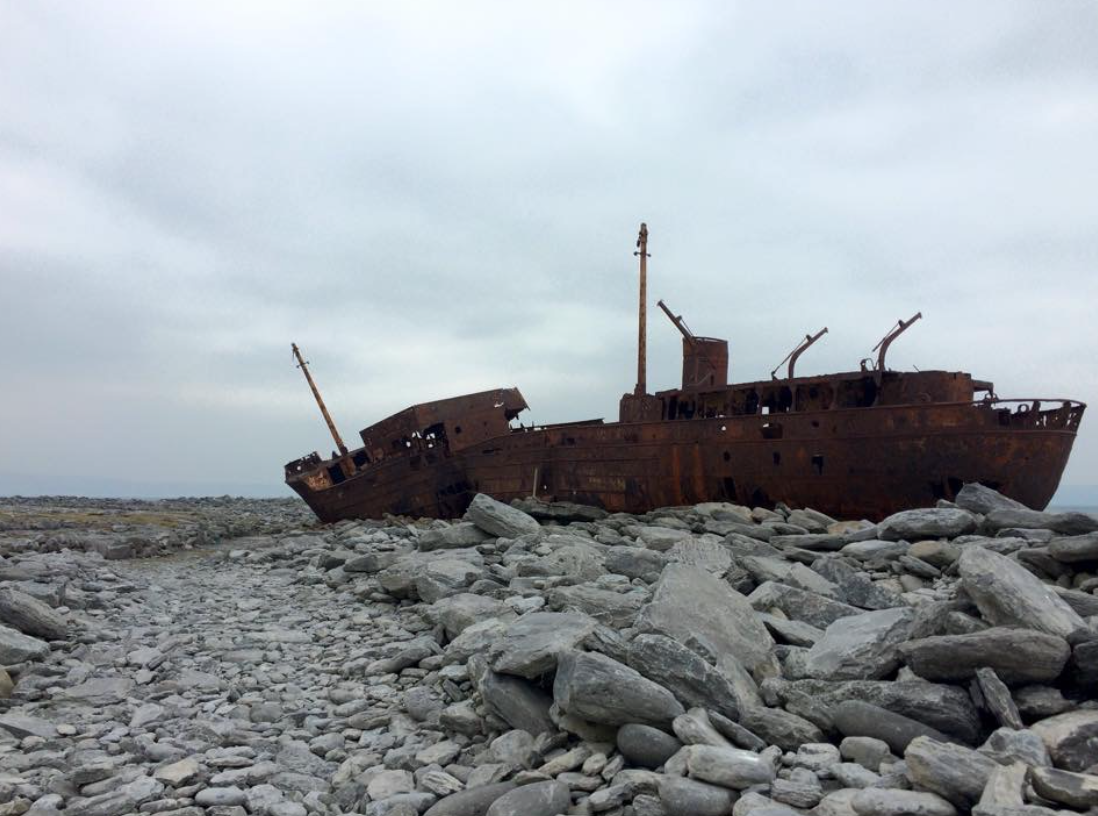 Dingle was a quaint town much bigger than Annascaul but nowhere near the size of Galway. It had a waterfront and marina, and then up a street was downtown with tons of little shops, restaurants, and pubs. Dingle is where the peninsula begins its end, and there is a drive called Slea Head that you can take to follow the peninsula all the way around and back to Dingle. It was breathtaking. Other than being five feet away from the edge of a cliff while you drive along a narrow winding road, the drive is simply beautiful. County Kerry is known as the most mountainous region of Ireland and let me tell you, I never expected to see so many of them. From the peninsula, you could look to the left and see a magnificent mountain range seeming to come right up from the ocean. There were beautiful ruins, the greenest grass I have ever seen, and plenty of sheep and cows. Annascaul and Dingle were by far my favorite little towns in Ireland; they felt like home. 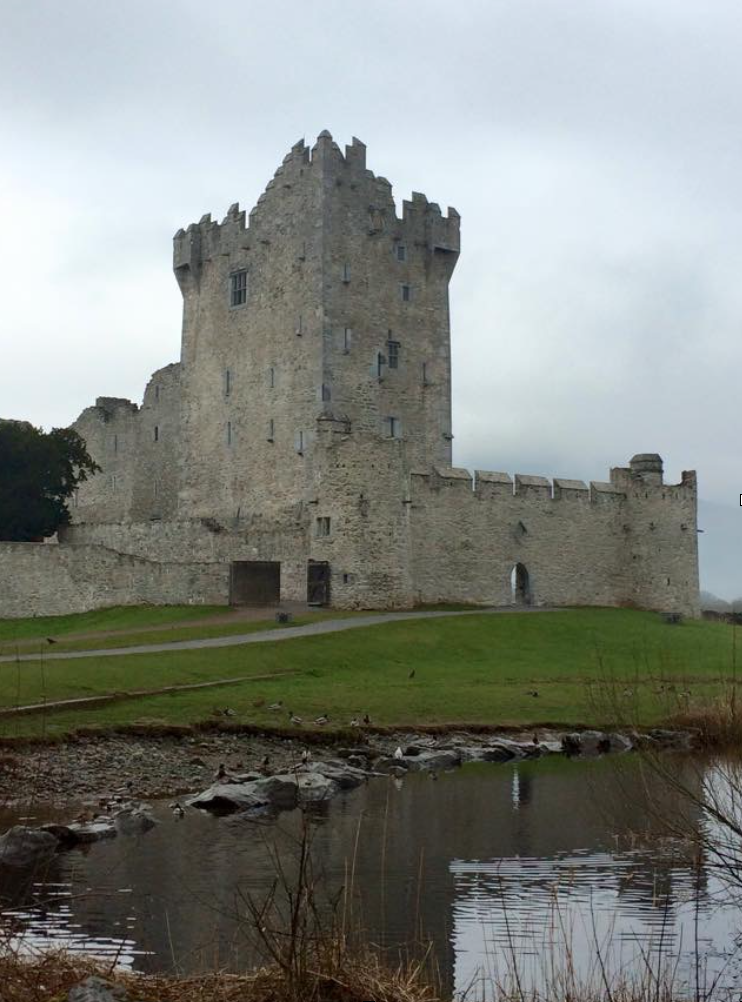 It wouldn't be a trip to Kerry without a visit to see the ring! I didn't know that the ring of Kerry is actually a drive around the entire peninsula that is directly below Dingle. Because we had already seen the ocean views of Kerry from Dingle, we decided just to stick to the top part of the ring and explore Killarney and the national park. Ross Castle was the first stop we mad along the way. It was a beautifully restored tower house, similar to Blarney, but not quite as magnificent and enormous. It overlooked a lake with mountains visible in the background. There was definitely a lot of remodeling that happened in the castle, and it was made to show what the life of the Lord and his Lady would have been like 500 years ago. I will say that although I admire the effort of the conservation of the castle, nothing will ever compare to the beauty of Blarney and its raw form that has been preserved without the aid of renovation.

From the castle, we continued the drive up through the Killarney National Park. The man who had bought Ross Castle also owned the 16,000 acres of the park, and when he sold the castle and land back to Ireland, his only request was that the land becomes the National Park that we see today. Because of this, there are no developments of any kind on those acres. Any buildings standing are very old and beautiful and even those that have crumbled are still majestic. There were lakes visible from the road throughout the park, and we even saw deer and wild goats on our short adventure. First we came to the stunning Torc Waterfall hidden up in the mossy landscape. After, we ventured to the park's peak known as Lady's View and looked down over all of the lakes we had passed and the winding road we had just come up. Our final stop was at Muckross House, a mansion built in the 1800's. We didn't have the time to go inside and explore, but we did walk around the grounds and saw the gardens. By then, it was time to head back to Galway to the gorgeous apartment my dad found for us overlooking the bay (with that view, of course I stayed there with them all week!). 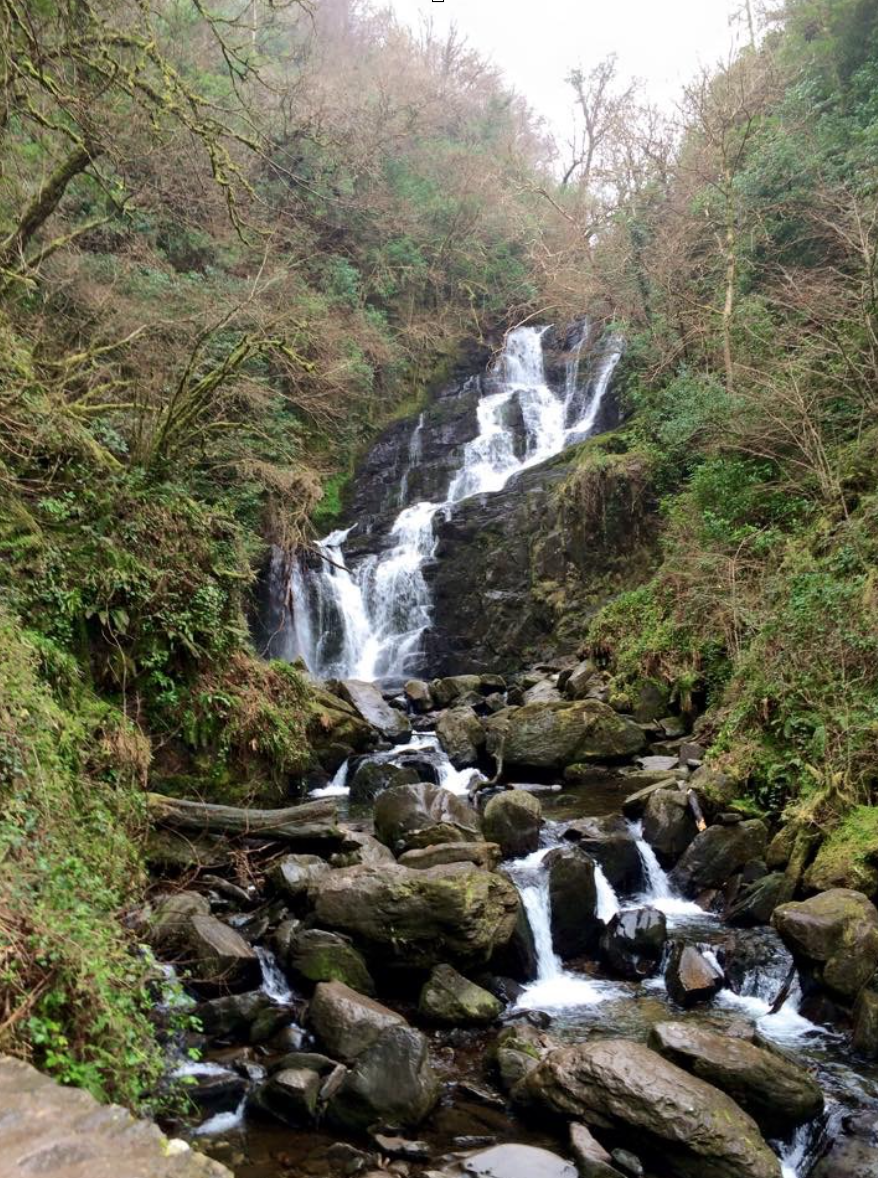 Our last family excursion was to the Aran Islands. I had been there once already, as I wrote about in my last blog, so this time, I wanted to explore one of the other two islands. After a bit of research, I chose to take the family to the smallest island, Inisheer. Although it is the smallest geographically, there are actually more people living on this island than there are on Inishmann, 297 to 160. I had thought that Inishmore, the big island, had been small, but boy was I in for a surprise. The small island had just one pub open, one little bike shop, one tiny market... and that was all I saw in terms of shops. It was even more traditionally Irish than the big island had been and much less touristy. I found, though, that the small island actually had a lot more sights to see than Inishmore had. On Inisheer there is an old stone fort, an older stone castle, and an even OLDER church in a cemetery. There is also a lighthouse, and a shipwreck called The Plassey. Out of everything, the shipwreck was by far the most incredible spectacle. The ship had seen the world in its hay-day, but in 1960 the ship crashed against the rocks off the shore of the island in a bad storm. All of the crew survived thanks to the people of Inisheer and the boat eventually washed up on shore of the island and has sat there ever since. Despite all the rust, you can still see the beauty that the vessel once held.

I can't leave out our little friend who followed us around the island, either. We named this boy Brownie and he just followed us along to the shipwreck as we rode our bikes. He led us for most of the way, and it was clear that he has travelled these roads many times in his life. He even jumped right up onto this rock he's sitting on as if he had done it hundreds of times before. He is an old soul and he was a great companion to have as we explored the island.

I came to Ireland because it is where my roots are. To have been able to explore this country over the past month and see exactly where my ancestors came from was an experience I will never forget. I have seen all the great sites of Ireland besides one, The Giant's Causeway in Northern Ireland, and I hope that I will find myself there in the next month and a half before I have to leave this beautiful place. If not, I guess I will just have to come back for a visit! 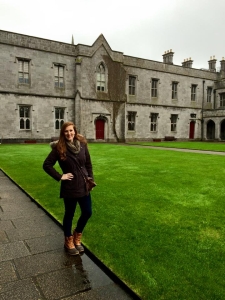 Riley Stefano is a student at St. Michael's College and an official API Student Blogger. Riley is studying abroad with API in Galway, Ireland.