It has been a month since I’ve been in Korea and recently, i’ve been craving for some burgers so i decided to try the KFC and McDonalds in South Korea. KFC’s menu and price is similar to the one in the States, but the size of the meal is more tiny. The size of the drink and fries is usually a medium, but it’s more like a small in Korea. Moreover, the sandwich is smaller, but the patty is thicker. I ordered a Bulgogi Burger set that came with a small drink and fries which was around 4,500 (around $4.50) Korean won. The burger tasted a bit different from the ones i had back in New York, perhaps it was the bulgogi sauce slapped over the lettuce that gave it a distinctive taste to it.

On the other hand, McDonald’s menu doesn’t have the dollar menu, green tea Mcflurry, corn salad, and Bulgogi beef burger. This time, i tried the popular Bulgogi beef burger and it wasn’t as good as i expected it to be. The beef patty was thin and insipid, there was more bulgogi sauce than the beef patty itself. The meal wasn’t that great but i had a great experience trying different types of burgers that aren’t available back in New York. Since bulgogi is very popular in Korea, many of the United States’ originated fast food restaurants in Korea offer bulgogi exclusive meal sets that represent the country’s culture.

Part of studying abroad is to try new things, and not to always stick to the same items because you can try them anytime you want. Since you are in a foreign country, you should try to assimilate into the culture by trying what natives eat. You should seize the moment and try unique things that will enable you to be embrace the culture tighter. 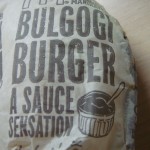 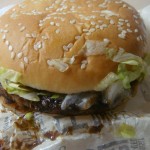