So, I am Jessie Frahm I am 26 years old and when I am not on Bali I live and study in Denmark.

I study on a master program in finance and international business and on the third semester I was given the opportunity to chose an internship as one of my electives. 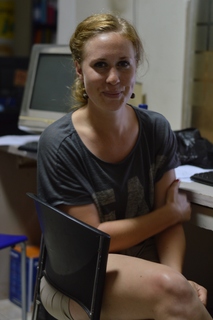 Ever since I started my master program I have known that I wanted to take an internship somewhere abroad but that I ended up on Bali was kind of a coincidence. I was seeking for intern programs through google and accidentially I found internship-indonesia.com. I filled out their formual having the feeling that I could not loose anything, but I seriously did not expect anything from it. Well, two hours later a Skype meeting was arrenged and I will not say that everything went fast.... at all..... but now I'm here!

I arrived to Denpasar almost two weeks ago, my boss, two guys from the office and a guy from Internship-indonesia.com (Marcin) picked me up in the airport. We went to a small warung to have some food. Marcin which is originally from Poland told me try whatever I thought looked nice and don't thinlk of what it is. That has kind of been my strategy ever since.

The first two nights I lived in a hotel, which had far from European standards, without joking a cockroach literally went under by bed when entering my room!! Later I moved into one of my collegues house near to the office. I live there with him, his wife, two kinds and another collegue. I have my own room which is simply just an empty room with a bed, but it works.

I did not really experience a big cultural shock like most people will expect to do, I think this is probably because I have already travelled some in Asia and I came here with an extremely positive and open minded attitude :)

In general all people here are so nice and friendly, if I ask about anything they act really helpful, its such a pleasure.

Well, I must say on the professional side I don't think I learn much. Everything goes really slow and many things are seriously done in Indonesian style. On the cultural perspective I really learn every day, the traffic is a mess, if you want to travel around you will need a car or a scooter, I won't reccoment the car since it takes three times a long to get around with than the scooter does. I bought myself a helmet yesterday and would recommend this to anyone going here. I paid 150000 rupiah divide this by 10.000 and you will know that it is the same as 15 dollars, cheap huh! I also practise Bahesa Indonesian everyday. Learning the language was one of my personal goals for comming here, since I have a clear idea about getting my own business importing stuff from asia and maybe live here parttime in future. I work hard on this everyday and I am already making progress.

Being here on the Indonesian premises with work, food, accomodation etc. is quite another experience that being here as a tourist. It is not only the streats which are crowded I think everything is kind of a mess in its own charming way. Everywhere you go you will see small temples and various traditions, rituals and dances takes place everywhere, its just a part of who they are and nothing which is done to pleas the many tourists.

I don't feel the pressure of the many tourists in everyday life, but if you go to tourist attractions everything will be concentrated about this. A good example of this is going to Kuta Beach, this is very famous for its beautiful sunset (indeed it IS beautiful) and its nightlife. But for every five meters you will have someone hanging after you, suggesting you to buy a massage or trying to sell you some kind of crap. I think you either love it or hate it, personally I try to avoid it, but it is really difficult when you go to some of the famous places.

For now I will end by giving you a few tips which I think have made my life easier here:

- Find someone who will teach you to drive a scooter in the messy traffic.

- Save all your 1000 rupias since you will need them every time you park you scooter.

- Buy a Wi-fi connection from "Smartfren" I paid 214.000 for mine incl a month free connection.