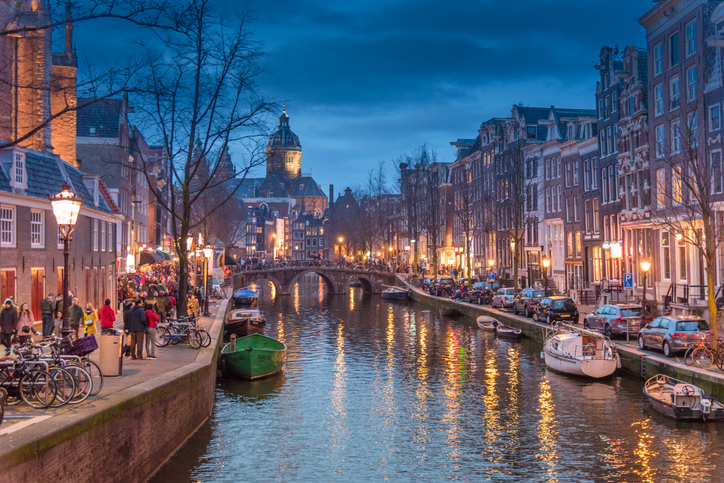 Famous for its bridges laced over picturesque canals, world-class museums, diverse population, progressive worldviews and waterfront buildings tucked cozily together, Amsterdam offers an ideal location for study abroad programs. CEA Study Abroad recently unveiled a new program in this Netherlands city, where students will spend a semester or summer at one of the world’s consistently ranked “Top 100 Universities.”

When you study abroad in Amsterdam, here’s a snapshot of the many cultural wonders and lifelong benefits -- both in academic and personal-growth arenas -- you’ll enjoy.

From the Anne Frank House and the Van Gogh Museum to the colorful markets along Amsterdam’s canals, there is history, scenery and charm at every turn in the “Venice of the North.”

Visit Dam Square to shop, visit the National Monument dedicated to the casualties of WWII, and take a walking tour. Stroll through Vondelpark to enjoy a variety of outdoor activities -- biking, picnicking, wildlife viewing, and taking in the park’s scenery.

Studying abroad in Amsterdam means absorbing a great deal of the city’s rich art history -- and in addition to the popular Van Gogh Museum, the Rijksmuseum is a must-see to get a glimpse of Dutch art and history spanning from the Middle Ages to the present day. The Rembrandt House allows travelers to witness the 17th-century space where the artist lived and worked from 1639-1656.

After biking along the canal paths and taking in Dutch history, stop by the Bloemenmarkt -- Amsterdam’s floating flower market -- which is home to 15 souvenir shops and an array of blooms that lend to the market’s namesake. Yet that’s not the only market beloved by locals and visitors alike -- with 260 stands, the Albert Cuyp Market is the largest day market in Europe and features fresh vegetables, fruit, fish, flowers, plants, fabrics, trendy clothing, leather goods, and jewelry. The street market opened in 1905 and is a favorite for those who spend a semester in Amsterdam, so don’t forget to try an authentic stroopwafel, bitterballen or soused herring during your semester-long culinary exploration.

Vrije Universiteit (VU) Amsterdam, founded in 1880, ranks among the world’s top 100 universities and hosts about 25,000 students a year.

Students spending a summer with CEA in Amsterdam can enroll in courses such as New Venture Creation and Entrepreneurship, Discover the Dutch: Language and Culture, and Data Analysis in R.

In addition to rigorous and resume-bolstering academics at VU Amsterdam, CEA’s Amsterdam study abroad programs include excursions to breathtaking locations like Utrecht, Haarlem, Leiden, and Maastricht.

Nearly 14 percent of VU Amsterdam’s student population is comprised of international students, making the university an enriching cultural location for study abroad programs. As for the city itself, 45 percent of Amsterdam’s population is made up of ethnic minorities, and its citizen body accounts for 180 different nationalities, cultures, religions and backgrounds. To study abroad in Amsterdam is to become a part of one of the most diverse populations in Europe -- at least for a semester.

Residents and visitors of Amsterdam are drawn to the city as a Mecca for personal freedom and tolerance. In addition to Amsterdam’s historic significance, the city is also on the cutting edge of using technology and data to improve city services and environmental sustainability.

There’s something for everyone, no matter your college major, when it comes to the Amsterdam study abroad experience. Search CEA programs in Amsterdam and apply today!