We checked into our pretty dodgy hostel, but at least the
group of us were all in the same room again, and we had 3 crazy stoner surfer
dudes sharing the room too. As soon as we were settled in, we took a walk down
to the beach to take some pictures…and it was gorgeous! The name ‘rainbow’
comes from the rainbow colored sand and rocks found along the shore. No, not
your typical rainbow, but every shade from black to tan makes this beach
beautiful. We found a crab and made him our mascot, then we splashed around and
got some dinner. Sophia and I passed a little café with an amazing sounding
pizza, with pumpkin and brie, rocket greens, and rosemary…and well, we had to
get it. After dinner, we headed down to the beach again, but this time to
stargaze. This night, by far, was one of my favorite memories. Dozens of
shooting stars filled the sky, the milky way was bright, and I saw more stars
than I knew existed. I guess being in a different hemisphere has its perks. We saw
lightning out in the distance, and I could only imagine the amount of beach glass
being created! Truly, it was spectacular. The sky was filled with shining
stars, and we laid on the sand chatting about life. I can’t really think of
much else that’s better than this.

The next morning we woke up for a beach run…which ended up
taking 3 hours. We attempted some yoga, and after getting back to the room for
a quick brekkie, I realized my entire back was sunburnt. I guess that’s what
happens when you don’t wear sunscreen…woops. We headed down to the beach that
afternoon to tan a bit and I ended up being buried as a GIANT mermaid. Thanks friends.
Then we headed out for a bush walk to “a super cool sand dune.” We walked
really high uphill and climbed a ton of steps, but these long walks, I’ve
found, are ALWAYS worth it. We got to the end of the forest full of squiggle
gum trees only to look out on the most perfect area of land I’ve seen. Literally,
a huge sand dune with the softest desert sand you could imagine. Turn your head
to the left and see the gorgeous ocean and turn to the right and see the sunset
over the entire city. Once again, Australia never fails to disappoint. We
surfed down the sides of the huge dune on boogie boards and then sat and
watched the sun set with amazing oranges and purples. I don’t think I will ever
truly understand how Australia comes together…I’ve seen just about every type
of land here. 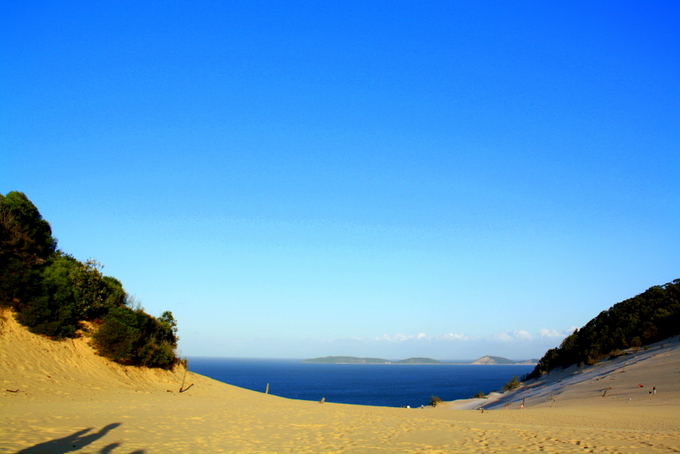 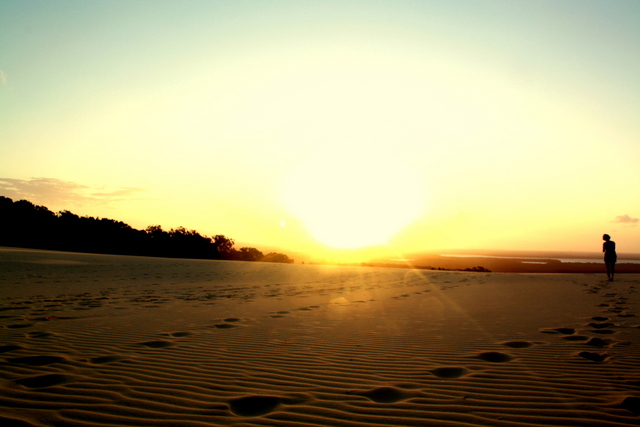 We got up early for a trip to Frasier Island which was super
cool, and we boarded a bus that was suitable to drive on land, sand, and water.
It was awesome to experience off-roading right on the beach! The rugged ocean
was crashing right outside of my window! Our first stop was a fresh water creek
where the silica sand, when mixed with water, makes a great exfoliator. So…we
scrubbed our entire body with this sand, even our hair, and every part of me
was as soft as a baby’s bottom. Next, we headed over to a shipwreck. Now, I’ve
never seen a shipwreck, but from what I can imagine they would look this – this
has to be the most amazing one in the world. The Maheno ship was washed up
right on the shore from a cyclone and the now rusting metal, covered in
barnacles was nothing but a photographers dream. 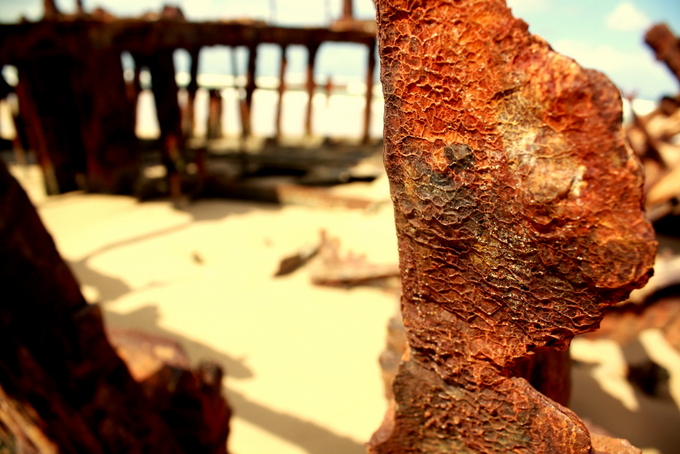 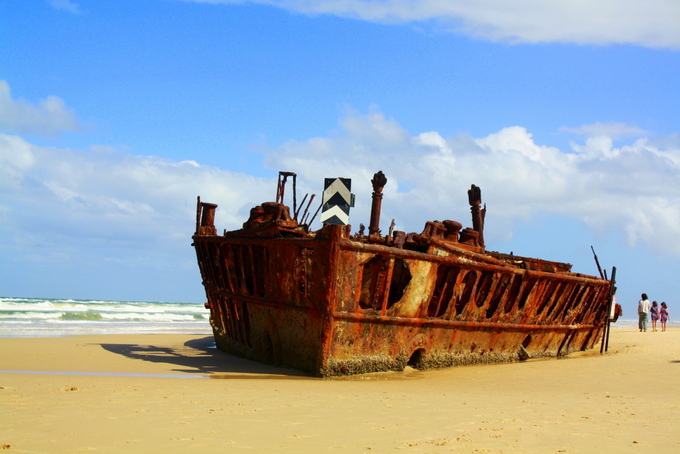