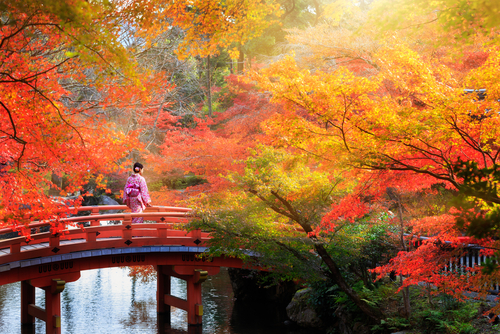 Teaching English as a Foreign Language in Japan is not only an opportunity to share your knowledge of the English language, but also to engage in an amazing cultural experience and explore “The Land of the Rising Sun” while working there. Keep reading for more information on teaching English in Japan programs

Japan is home to 126 million people.[i]  While many of these people have studied English, several people are afraid to speak it unless their craft is absolutely perfect.[ii] It can be tricky.  English sounds such as “th” or “v” don’t exist in the Japanese language. Also, “r” and “l” can sound almost exactly the same to Japanese ears. That’s where you come in as an English as a foreign language teacher.

Teaching English as a Foreign Language in Japan is also an opportunity to improve your Japanese language skills. Every interaction outside the classroom is a lesson -- from going to the market to pick up fresh fish and vegetables and saying “good morning”, or “"ohayō gozaimasu,” to meeting someone at a Karaoke bar and saying “good night,” or “Oyasumi nasai.” Opportunities will abound to perfect your Japanese language skills. Once the teacher. Now the student.

Life in Japan isn’t all work and no play. Teaching English as a foreign language is an opportunity to meet people and share in their unique culture. In fact, Japan consists of 6,852 diverse islands, though the majority of the land is[iii] within four main islands: Hokkaido, Honshu, Shikoku and Kyushu That means that when you’re not teaching, there is an exciting range of geography to explore.  With Japan’s rich culture, cities, historic sites and cuisine peppered throughout 6,852 islands you may never run out of things to do and see.

Fun Fact: Since 73 percent of the country’s land is unsuitable for development because of mountains, Japan is densely populated in some areas but home to untouched, rugged beauty elsewhere.

With all that teaching, you might get hungry. In markets and restaurants, the food is often based on the staple of steamed rice.[iv] Also, fish and noodles – such as udon and soba – are common on the menu. In fact, Japan boasts one of the world’s healthiest cuisines. In fact, in Okinawa Island, people often live to be more than 100 years old.[v]

Wherever you land for your Teaching English as a Second Language program, make sure to make a stop in Tokyo, the sixth largest city in the world, and an economic, cultural and political hub for Japan. More than 13 million people live there – from flea markets to karaoke bars, you’ll find just about any thing to suit any interest.  Tokyo is just one of 103 cities to be seen in Japan. Every one has its own claim to fame, especially Kyoto. It was the imperial capital of Japan for more than a thousand years!

One of the highlights of a visit to Japan is the presence of Shinto and Buddhism temples. However, if you’d like to see some of the most popular and revered structures, including the famous Golden Temple, Kyoto is the place for you.[vi] The Golden Temple, known in Japan as Kinkaku-ji, is a UNESCO World Cultural Heritage site. It has burned down a few times, but since it was restored, most recently in 1987, it serves as a place to practice Buddhist Zen meditation.

Also, Nara is home to Horyu-ji Temple, built in the early 7th century, and is one of the oldest surviving wooden structures. The thousands of deer there are friendly and were once thought of as messengers from the Gods.

If you’re looking for a more rugged experience outside the classroom, and if hiking Mount Fuji is on your bucket list, the Japan National Tourism Organization recommends doing so between July 1 and September. Depending on your fitness level, it could take approximately six hours to reach the iconic summit and three hours to get back down[vii].  For those wanting to get off the beaten path, try the northern region of Tohoku. Historic castles, crafts, hot springs, delicious food, and untouched beauty are just some of the reasons Tohoku is known as the “Treasureland of Japan.” Who knows, you could feel inspired to put your Japanese language skills to use and write a haiku!

If you’re interested in the arts, Japan will become a second home. Painting, calligraphy, sculpture and even gardens are art forms in Japan. Also, clothing – especially kimonos, the traditional floor-length, robe-like dress –  can be a form of art as well. Men typically wear darker, more subtle colors. Women’s kimonos are colorful and almost wearable pieces of art.

Teaching English in Japan: Find a Teaching a Foreign Language in Japan opportunity

Imagine the difference you’ll make in a classroom, teaching English as a foreign language – and all the adventures you’ll experience along the way. Check out studyabroad.com to get help finding the right Teaching English in Japan program to make a difference in the lives of students and to start the adventure of a lifetime.