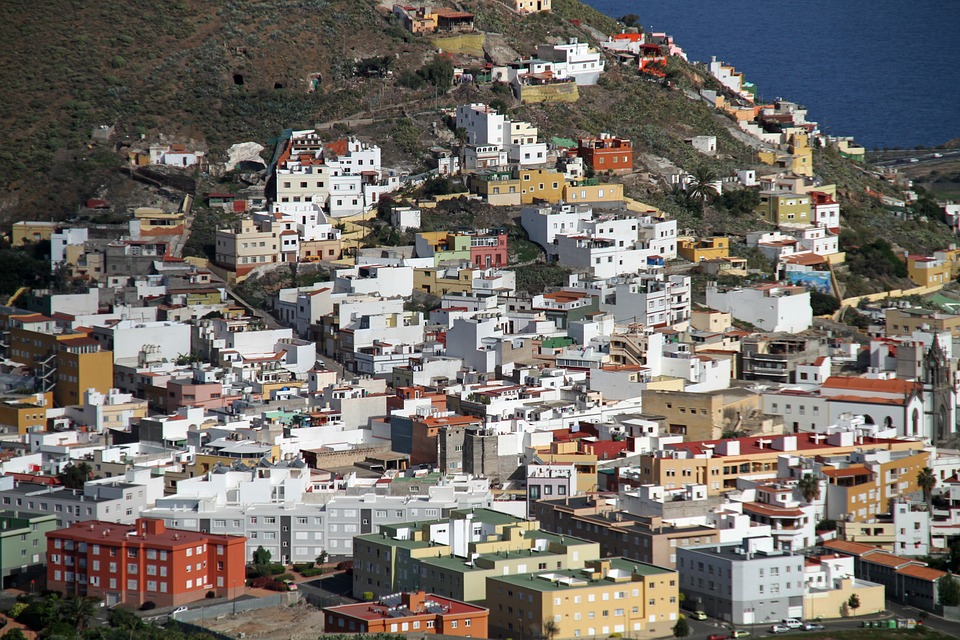 Lost and Found in the Canary Islands

Gran Canaria is paradise. I’m not saying that in the way that those cheesy travel commercials say it or in the way that game shows describe places like Branson, Missouri. I’m saying it in the actual sense of the word. Gran Canaria, part of the Spanish Canary Islands off the coast of Morocco, is literally paradise.

Here, you can be standing on the beach looking out at the beautiful Atlantic Ocean and behind you, find breathtaking mountains jutting into the heavens. The part beach, part desert, part mountain region makes this place something that you cannot find anywhere else. And in my experience, the perfect place to get everything stolen from me and my friends!

My three friends and I were studying abroad in the Netherlands and decided to take a weekend trip to Puerto de Mogan on the south corner of the Gran Canaria. It was immediately worlds apart from all of the other weekend trips we took to places like Prague and Berlin. After checking into our hostel we had a great lunch of paella and sangria and later went to the beach to soak in our trip. Three of us waded out into the ocean while one of us stayed on the beach to watch our belongings. I remember swimming through the cool waters of the Atlantic thinking to myself, “this really cannot get any better.” Word of advice, travelers—don’t ever think that because from that point on, things will not get any better.

The next second we see our friend on shore waving at us in a panic, running up and down the beach. We get back to the beach and he tells us that our bags are gone, along with all of the stuff we had in them. Apparently 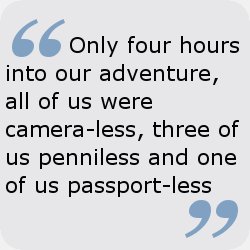 when he was switching places with one of my friends in the water, both of their eyes were off the bags for no more than twenty seconds when someone came by and scooped them up.

Now, of course our friend who was supposed to be watching the stuff got out virtually unscathed, he only lost a pair of sunglasses. My other friend and I were victims of more significant damage. We both lost our wallets, all of our credit cards, both digital cameras and the key to the hostel. Unfortunately that wasn’t the worst of it, my fourth friend got hit the hardest. Along with her wallet and her camera, she lost her passport and any other kind of identification she might need. Only four hours into our Gran Canaria paradise adventure, all of us were camera-less, three of us were penniless and one of us was passport-less and nearly unidentifiable to authorities.

Now, you might be asking yourself, “Who brings all that stuff to a beach?” That’s a fair question, and that’s the question that everyone asked us a thousand times over. Well, we did.

We spent that night sitting in the hostel trying to remain calm by meeting new friends and swapping stories. Among them were two Dutch newlyweds, Margreet and Jaap, who spent the week camping in the mountains. We realized that while this terrible thing did happen to us, we were still in the most beautiful place in the world with the best people we had ever met and we were determined to enjoy it whether we had money or not. Now, the only problem was: can we get our passport-less friend back to the Netherlands in two days?

Keep Calm and Carry On

Luckily we had a little bit of money. The guy that was supposed to watch our stuff was smart enough not to bring his wallet to the beach and while he was about to overdraw from his account, he was kind enough to spot us each a little bit of money until our parents could wire some through.

The girls, who had all their stuff stolen, took a bus inland to find a police station and file a report. Believe it or not, there was no police station in the town we were staying in because apparently this sort of thing never happens. When they got back to the hostel later that day they had great news. They filed a police report and were informed that as long as the girl without a passport had the police report and a copy of her passport, she should be able to board the plane. This worked out perfectly because before we even left for our abroad program we were required to send an e-mailed copy of our passports, which means she had a copy of her passport in her “Sent” folder on her e-mail. If, however, the passport copy and police report didn’t work, she would have had to take a plane to Madrid in order to deal with the U.S. embassy with no guarantee of how or when she would be allowed to go home.

The next morning, my friend got onto the flight just fine and we got back just as easily as we would have if the trip had gone perfectly. We all walked away from that adventure with  smiles on our faces because  in the end, we realized that in the future there will be more money, more cameras and more passports that we can get, but that weekend in Gran Canaria was a once in a lifetime experience.

As with any study abroad program, you start to look at life differently as you’re met with these challenges you must solve along the way. For us, such invaluable lessons were learned sitting on the rocks as the sun went down over the mountains, eating cookies with the Dutch newlyweds and talking about how weird baseball is. And that is why Gran Canaria is paradise.

What should you do…if you get robbed abroad?

First things first, don’t panic. Once you realize you’ve been pick-pocketed in a busy city center or robbed on a beach, ask around to find the authorities.

To rest even easier, think before your travel. Plan ahead and be smart about what you carry on your person and what you leave behind in a safe place (if there is one). It’s not the best idea to be carrying around all of your credit cards, original travel documents and valuables when you go out for a day or weekend trip.

Always be aware of your surroundings and when you can, try to fit in. Acting like a local and less like a tourist will lessen your chances of looking like a prime target for a quick pick-pocket.

To read more on how to prepare and handle travel documents and what to do if your passport becomes lost or stolen visit our FAQs on Travel Documentation for these answers and more!

Share your study abroad horror stories with us! E-mail Us.

Learn more about studying abroad in the Netherlands.