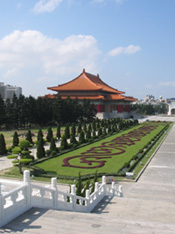 Our planet consists of few Gamma World Cities - locations that seem to combine elements of the entire world into their radiuses and, likewise, have major influences on how international society functions. The aforementioned cities, as well as Geneva, Johannesburg, and Munich, among others, are a part of this exclusive club, and that makes them extraordinarily spectacular places in which to study abroad.

Taipei, with its status as 'de facto capital city' of Taiwan, and the widely held belief that it is 'the Republic of China's center of politics, commercial, mass media, education, and pop culture,' is an especially good choice. Not only is it the height of everything important to a good education, but it exists in a valley in a subtropical climate with a perfect location with the Sindian River on its south, Keelung River at its north, Danshuei River to its west, and Yangmingshan National Park rounding out the rest. That makes for some breathtaking beauty amidst the high culture cityscape.

Considering how built-up and active the city is (it possesses the world's tallest building - Taipei 101) it's hard to believe that the region was founded by Ketagalan tribes in 1709. Currently, Taipei is home to the presidential office, and is the site of most of the action in Taiwan's presidential campaigns. Additionally, while some of the buildings, hotels, and even train stations in Taipei have that classic ancient oriental appeal to it, the city functions like something out of the future. As a quick example, their subway system is known as the Taipei Rapid Transit System, and it earns that title with its impressive technological speed and efficiency.

The main form of transportation for the more than 3 million residents, however, is the always fashionable motor scooter. These zippy bikes jut in and out of traffic and whip right through the landscape, from those classically Asian buildings to the mammoth skyscrapers, and everything in between, including the hot springs found on the sides of the Seven Star Mountain in glorious Yangmingshan National Park.

So did you ever think that you'd hear Taipei lumped into the same group of cities as Rome and Barcelona? You should have, because it is just as important, just as influential, and just as spectacularly beautiful and alive as those cities. If you want a taste of the orient, you have to consider studying in Taipei, Taiwan