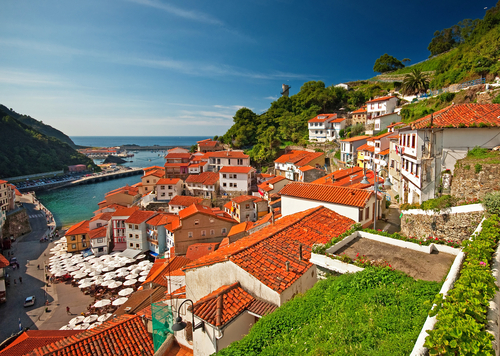 Looking for an exciting and unique study abroad opportunity for your spring semester? You might be interested in programs for spring study abroad in Spain. There are a lot of reasons why Spain might be a good choice for you. From the warm Mediterranean climate, to its complex and fascinating history, to the vibrant arts culture past and present, to the beautiful outdoors and delicious culinary traditions, Spain has a lot to offer no matter what your area of study. If you want to study somewhere that might allow you to pursue your passions, practice your language skills, and gain valuable international travel experience, Spain might be a great fit for you.

Why Spring Study Abroad in Spain?

Whether you want to study abroad during your spring semester to accommodate your studies back home, or whether you are looking for a great time of year to get outdoors and explore as much as possible while abroad, spring is a great time to study abroad in Spain. While the climate can vary by region, in general, springtime has is mild with a reasonable amount of clear weather, making it great for getting outside, travelling, and experiencing local culture.

Spain has a lot to teach the interested student traveler. Whether you’re a student of history, language, the arts, or something else, Spain is a great place to study if you want to take your learning out of the classroom and into the real world. Even outside of academics, Spain has a ton to offer. For example, if you’re the type who prefers to spend all your time outside the classroom exploring the great outdoors, Spain might be a great choice. With a diverse landscape ranging from mountains and rivers to islands and beautiful coastlines, there’s a lot to explore in your free time while you’re there. If you’re more of a city person, don’t worry! Spain’s cities are both historic and modern, with vibrant local cultures and dialects, art scenes, and unique culinary traditions.

Learn Spanish While Studying Abroad in Spain in Spring

Do you want to study abroad so that you can strengthen your language skills? Whether you’re a novice Spanish speaker, advanced, or even a total beginner, spring study abroad in Spain might allow you to work on those Spanish skills, building your fluency by allowing you to take your practice out of the classroom and into the real world.

If want to learn Spanish in Spain, you might be interested in learning Castilian. Castilian, or European Spanish, is one of the more widely known dialects in Spain, and is the primary dialect of Spanish-language European media. If you want to be able to use your Spanish skills in a European context, this is a great choice. However, it’s not your only option. Despite Castilian being the official language of Spain, a variety of other regional dialect are also spoken, from Catalan to Galician, and even Basque. If you want to learn one of these other dialects, you might be able to choose a particular region of Spain accordingly.

Whether you’re looking for accessible beginner-level Spanish education, or more advanced practice, you may be able to find that in Spain, both in the classroom and with real-world practice outside of it.

Immerse Yourself in History & Culture with Spring Study Abroad in Spain

Maybe you want a study abroad experience rich with history and culture. If so, spring study abroad in Spain is a great fit for you. With historical artifacts dating all the way back to prehistory, Spain is a great place for a student of history—whether it’s your major or a personal interest—to get that up-close-and-personal experience. Whether it’s cave paintings, Roman Aqueducts, the Alhambra, or something more contemporary, you’ll be able to take your education from the classroom and into the real world, walking the same paths and viewing the same monuments you’d otherwise read about in your textbooks.

Spain’s long and fascinating history is evident in its culture, both historically and today. For example, Moorish influence is evident in art styles, architecture, and even the music of Spain. Similarly, the emphasis on religion in the Middle Ages and the Renaissance still influences the culture of Spain even today. From the Roman Empire, to the Spanish Civil War, up to now, Spain is a fascinating study abroad opportunity both past and present.

Study Abroad in Spain to Experience the Arts

Whether you’re studying it in school, or following your passion outside of it, Spring study abroad in Spain might be great for anyone who wants to experience the arts. Spain has a long history of artistic accomplishments—one that persists even today. Whether you’re interested in fine arts like painting or sculpture, literature, music, or architecture, you can learn a lot in Spain.

Spain has a lot to offer for those who prefer visual arts. Spain has produced a host of great artists throughout the ages. El Greco, Goya, Picasso, and Dalí are only a few of the examples. Spanish art has a number of influences from its neighbors throughout the ages, including France and Italy. However, its Moorish influence might be the most distinctive, giving Spanish art a distinctive flair you won’t find anywhere else.

Visual arts aren’t the only things Spain has to offer, though.  If you’re a student of literature, or if you love to read and write, Spain has a great literary tradition. Whether you’re an avid student of Spanish literature, or whether your only exposure to Spain’s great literary tradition is its most famous example, Don Quixote, Spain is a great place to unite your passion or storytelling with your studies of the language. Spain also has number of cinematic accomplishments. Whether you are just a lover of film, or you’re learning to analyze and create them, Spanish cinema is another great option for you to explore while you’re studying abroad.

If you love music, whether you study it formally or not, Spain might be a great fit for you. Spain has a great musical tradition going back centuries. From Medieval chant and the polyphonic styles of the Renaissance, to more contemporary styles like flamenco and even pop and rock music, Spain’s musical culture is full of diverse styles, making it a fun and fascinating place to visit for music lovers of all levels of experience.

If you’re ready to find spring study abroad in Spain programs, now is the time to get started. Whether you want to study a specific discipline, like history, the arts, or Spanish, or whether you value the opportunity to immerse yourself in a new culture and explore a new place, Spain is a great choice to make your spring semester unforgettable. Don’t wait any longer. Take that first step toward your spring semester study abroad in Spain today!