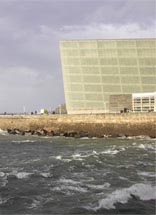 Located 12 miles from the French border, San Sebastián is nestled at the foot of the Pyranees Mountains in the province of Gipuzkoa. The city is well known throughout Spain for its crescent-shaped bay (La Concha) with its beaches and port.

While San Sebastián was quite an ancient city, its history has been far from peaceful. Today, little proof remains of its lengthy heritage. The city was founded around 1180 by King Sancho el Mayor of Navarra and was known as Donostia. Donostia is the Basque term for San Sebastián and is still in wide use today, as is the Basque language, which is spoken by approximately one-third of the city's inhabitants making it one of the more bilingual cities in Spain. From the city's name, the inhabitants also draw the name for themselves ­ donostiarras.

The city began in what is known as the Parte Vieja or Old Quarter, which was walled in for defense. Due to the unique geography of the area, an isthmus joining the city center with Mount Urgull, the bay, the outlet of the Urumea River, and the city's port, it was an ideal military location from early on. For this reason the city was surrounded by a wall and saw many wars and sieges over the ages. In 1813, the city was almost completely destroyed by fire after an explosion caused by Anglo-Portuguese troops barraging the Napoleonic French troops who were occupying the city.

Today all that is left of the early buildings of the city are the Iglesia de San Vicente (Saint Vincent Church), the church of Santa Maria, and the convent of San Telmo, which were built after the 16th century. However, the Parte Vieja does give the flavor of the older city while the rest of it is warmly modern. With a population of 200,000, San Sebastián manages to be both cozy yet exciting.

The city is also known for its many fine restaurants, its beautiful beaches, and its way of life. Donostiarras like to get in six meals a day when they can manage it, which is pretty much every day. You will find the hospitality and tradition surrounding these many meals to be an excellent opportunity to engage Spanish culture and people. Amidst eating and studying, you can also take advantage of the beach.

Studying in San Sebastián also provides you with the opportunity to explore the best that Spain and France have to offer. The city is within easy reach of marvelous cities such as Barcelona, Madrid, Paris, and many more. You can explore the beautiful countryside and stunning beaches of Spain and France. And that's just the beginning.

Consider the possibilities and explore the wealth of opportunities that studying in San Sebastián can provide.