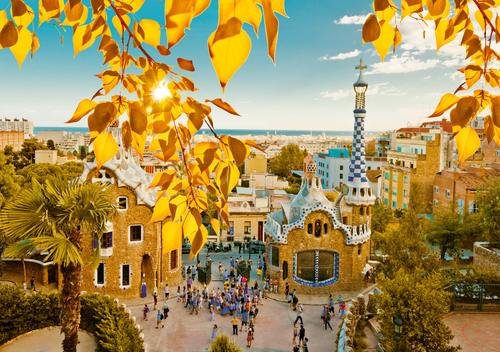 Want to spend your fall semester abroad, enriching your education in an exciting new place? Why not consider options for fall study abroad in Spain? Located along the Mediterranean, Spain has a Mediterranean climate, beautiful landscape, long, fascinating history, not to mention its contributions to the arts, both historically and now. Studying abroad in Spain might allow you to strengthen your language skills, learn more not only about Spain but about Western history in general, gain new experiences, meet new people, and more. If you’re looking for your perfect fall semester study abroad opportunity, Spain might be the perfect choice.

Why Fall Study Abroad in Spain?

Whether you want to study abroad in the fall because it’s most convenient for your academics, or because you’re looking to go someplace a little warmer, Spain might be a great choice. With its Mediterranean climate, Spain in the fall is a mix of warm, sunny weather (though not as hot as the summers there!) and rainy days. But the climate isn’t the only reason to study in Spain.

No matter what your academic and personal interests, Spain has something for you. The terrain is diverse and beautiful, ranging from mountains and rivers to islands and picturesque coastlines. If you’re the type of person who prefers to spend your time outside the classroom exploring the great outdoors, you might like Spain. If you’re more of a city person, Spain has a number of famous and unique cities, each with their own local culture, culinary style, history, and sometimes even local dialects. Not to mention La Liga teams. If you’re a soccer person, and want to study abroad in the city of your favorite team, you might even be able to catch a game in your free time when you’re not in class.

Maybe you want to study abroad to boost your language skills. Whether you’re a total beginner, or an advanced student of Spanish, Spain is a great place to study abroad to work on those skills. Castilian Spanish, spoken in the northern and central regions of Spain, is also referred to as European Spanish, as it the language of Spanish-language media in Europe. If you want to be able to communicate with Spanish speakers in European contexts rather than Latin America, Castilian is a great choice.

But it’s not the only one. Different regions in Spain might have different dominant dialects, from Catalan to Galician, and even Basque. You might be able to choose a particular region if you want to study one dialect in particular, or to gain exposure to a variety of speaking styles.

Whether you want a study abroad program that is totally immersive, allowing you to practice speaking Spanish both in and out of the classroom, or if you want a program somewhat more accessible to the beginner, options might be out there for you.

Do you want a study abroad experience rich with fascinating history? With artifacts dating all the way back to pre-history, through the Roman Empire, all the way to today, Spain is a great choice both for serious students of history, anthropology, and related fields, as well as for those with a personal interest or curiosity.

If you study abroad in Spain, you might be able to take your learning outside the classroom. From cave paintings to the Roman Aqueducts, to beautiful Moorish architecture like the Alhambra, you’ll be able to walk in the footsteps of the same historical figures you read about in your textbooks, giving your studies a unique real-world context you can’t get anywhere else.

The history of Spain is tied closely with its culture today. For example, Moorish influences are visible not only in historical architecture and place names, but also in areas like music and art styles. Similarly, the influence of religion in the Middle Ages and Renaissance have left an indelible mark on Spanish culture and customs. From Imperial Spain, through the Spanish Civil War, the world wars, until today, Spanish history and culture have been influential, and interesting to learn about in a real-world context.

Fall Study Abroad in Spain to Immerse Yourself in the Arts

Whether you’re a formal art student, or have a passion for art outside of your studies, if you study abroad in Spain, you can find a lot of it! Spain has a long and great artistic tradition. From Ancient Rome, through the religious iconography of the Middle Ages, the Renaissance, and even today, Spain’s contribution to the arts—visual, musical, and literary—is notable. So if that’s your passion, you’re in for a treat.

Spain has produced a number of great artists through the ages. El Greco, Goya, Picasso, and Salvador Dalí all came from Spain, to name a few. Spanish art has been influenced by a variety of neighboring cultures, such as French and Italian traditions, especially in the Neoclassical and Baroque periods, but this is one area where Moorish influence is evident, giving Spanish fine art a unique flair.

If you are interested in studying architecture, Spain might be a great study abroad choice. From Moorish architecture, to medieval and Renaissance, baroque, neoclassical, and more, Spain hosts diverse architecture from throughout the ages. But it’s not only historical architecture you can learn about. A number of well-respected 20th century architects lived and worked here, making Spain a great place to learn about the conventions of today in addition to what came before.

But it’s not only visual art you can experience in Spain. Spain also has a great literary tradition, with famous works in a variety of styles and genres. Whether you’re an avid student of Spanish literature, or whether your only exposure has been Don Quixote, if you want to practice your Spanish while immersing yourself in the literary landscape of a new culture, Spain is the place for you.

Music students might also enjoy studying abroad in Spain. Whether you are a music major, or whether you love studying music in your own time, or experiencing it casually, Spain’s long and vibrant musical tradition might be exactly what you’re looking for. From the chant of the Middle Ages, to the polyphonic music of the Renaissance, through Baroque styles, up to now, Spain’s musical heritage is rich. Spain is also famous for its classical guitar music, especially flamenco. Whether you’re interested in classical music, traditional Spanish folk music, or the modern music scene, Spain is a great place for any music lover to study abroad.

Are you ready to find a great program to study abroad in Spain for your fall semester? No matter what you’re most interested in, whether it’s history, the arts, the food, the travel experience, or even soccer, great programs are available for you to consider. Let StudyAbroad.com help make your fall semester unforgettable with unique Spanish study abroad opportunities!