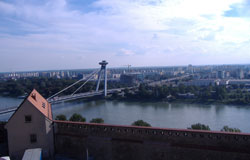 Slovakia emerged as a country twice in the last century, once as a result of the Munich Agreement and then the peaceful Velvet Revolution in 1989. This country that was once part of Czechoslovakia is landlocked and is now bordered by the Czech Republic, Austria, Poland, and Hungary. Slovakia was officially accepted into the European Union in 2004, and hopes to convert its Koruna to the Euro in the upcoming years. Students have the option to study abroad in Slovakia through several study abroad programs available to them.

Slovakian cuisine is influenced by the various neighboring countries and strongly resembles that of Hungary. Slovakia is probably more known for its Pilsen beers and its wine production. The Tokaj region produces some of the world famous sweet wine that was the drink of choice of the Russian Czars.

The mountainous landscape accompanied by rivers, make Slovakia an ideal place for boating, kayaking, canoeing, and rafting. Slovakia also offers many mineral springs and numerous spas throughout the country.