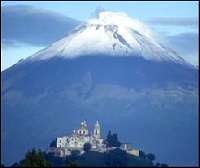 Because it was built from scratch and designed by a Spanish city designer, Puebla demonstrates unique Spanish colonial architecture and was able to clearly express the new mestizo culture that was developing when it was founded. The city gained one of its nicknames, City of Angels (Angelopolis), due to the legend that founder Bishop Julian Garcés was told where to build the city by angels. Today, the historic architecture is still well preserved in a 100-block area in the center of the city known as El Centro Histórico, and within that area there is a smaller square of a few blocks known as El Zócalo, which has an even greater concentration of famous buildings.

Due to its unique and well preserved architecture, Puebla became an UNESCO World Heritage City in 1987 and as the UNESCO website states, “The new aesthetic concepts resulting from the fusion of European and American styles were adopted locally and are peculiar to the Baroque district of Puebla.” Some of the most notable structures in Puebla include its cathedral that demonstrates Herreresque-Renaissance and early baroque style, the Iglesia de Santa Domingo, which demonstrates the baroque style with its gilded plaster, carved stone, and the profusion of angels and cherubs adorning everything, and within it the Capilla del Rosario (Rosary Chapel) with its onyx stonework.

Puebla is also famous for its beautiful crafts and textiles including the famous Talavera ceramics. Talavera tiles decorate much of the city's architecture, which earned it the name City of Tiles. Additionally, Puebla's onyx crafts are well-known throughout the country.

Aside from its art and architecture, Puebla also has a proud history. It earned its nickname as the Heroic City of Zaragoza for its involvement in Mexico's revolution and its historic efforts on Cinco de Mayo. In fact, it is one of the few places within Mexico where that holiday is really celebrated. In 1862 a Mexican army of 2,000 led by General Ignacio Zaragoza decimated a French army of 7,000. This decisive victory proved a turning point in the Mexican efforts to oust the French.

Today, with a population of approximately 2 million poblanos (the term for those who live in Puebla), Puebla is far from living in the past. The city is an industrialized, economic center for Mexico and enjoys the presence of such companies as Volkswagen. The company's plant there is the only one that produces the new Beetle. The climate in Puebla is temperate all year long with temperatures typically ranging between 50 and 80 degrees. It is located in the mountain valley of Puebla and from the city, it is possible to see four of Mexico's tallest volcanoes, Popocatépetl, Iztacc’huatl, La Malinche, and Citlaltépetl.

The city also boasts some inventive cuisine. The national dish of Mexico, mole poblano, was invented there. Mole poblano is a spicy chocolate sauce that is served over chicken or turkey. Other famous dishes include chiles en nogada, which are meat-stuffed green peppers in a walnut-pomegranate sauce, camotes, which are sweet potato candies, and a dish invented by Middle Eastern immigrants known as tacos arabes, which involve spit-roasted, seasoned pork served in puffy, wheat tortillas.