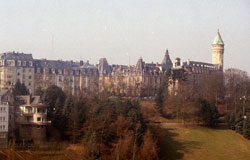 Surrounded by Belgium, Germany, and France Luxembourg is comprised of hills and low-lying mountains. Encircled by beautiful baroque houses gives the surreal feeling one is part of a fairy tale, trapped in contemporary Western Europe. Being the only sovereign Grand Duchy in the world only reinforces that enchanted thought. This beautiful Western European country may be the perfect choice for a student looking to study abroad. Consider study abroad in Luxembourg and find programs suitable for any major.

The Climate for Study Abroad in Luxembourg

The mild continental climate produces elevated levels of rainfalls throughout the year but this should not deter one to visit the various museums and sights in the "Capital of Culture", like the picturesque Luxembourg Castle that is centered in the capital, Luxembourg City.

Luxembourg was a founding member of the European Union as well as NATO and the United Nations. It adopted the Euro in 1999, leaving behind the Luxembourg Franc. This country is trilingual, where French is the administrative language; German is used in the media, schools and is the written language; and preferring Luxembourgish for day-to-day speech.

The fine taste of the French and the hearty sizes of the German cuisine are noticeable in the Luxembourg dishes. The Gromper Keeschelche, deep fried potato pancakes that are rich in flavor leave the mouth water. The Kach Keis is a spreadable cooked cheese, or the Pate that is a homemade meat spread that go perfect with the French Baguette.

Offering magical moments with the Luxembourg Castle, a Grand Duke, a delectable cuisine and fine art, Luxembourg is a must see.