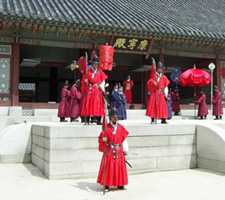 This, of course, is a terrible shame, for Seoul has so much to offer, and so many riches just waiting to be discovered, that the first time you visit the city you will likely find yourself awe-struck by its beauty, fascinated by its history, and simply bowled over by its culture.

'With over ten million people living within its city limits, Seoul is one of the most populous cities in the world. However, with an area of only 605 square kilometres, it is also one of the smallest and most densely populated major cities' (www.en.wikipedia.org). And while this means that living there can occasionally be trying on those who value a sense of space, it can also be enriching in ways that only the world's most crowded places can be. Imagine, for example, New York without its population overload: Would strolling down Fifth Avenue be the same if it weren't so overcrowded? Probably not. But the riches of Seoul are such that they are enough to make even the most city-phobic visitor melt.

Its history goes back thousands of years, and the first time it was mentioned in writing was more than 2,000 years ago, in 18 B.C.E. (www.en.wikipedia.org). Since then, of course, a great deal has happened within its borders, and the evidence left by those events form the basis of today's tourist sites. The city 'became the national capital in 1394 during the Joseon Dynasty, and has been maintained as the hub city of Korea for 600 years. As a result, Seoul has several beautiful ancient palaces such as Gyeongbokgung, Gyeonghuigung, Deoksugung, Changgyeonggung, and Changdeokgung (www.visitseoul.net). Visitors are also drawn to Seoul for its pre-historic sites, some of which date back more than 5,000 years.

But like any great world city, Seoul is about much more than its past: From its top-notch restaurants that serve food from all over the world (it is, after all, a global city) to its cultural institutions, some of which are, right now, ranked with the best in the world, Seoul is a city simply bursting with life, excitement, and things to do.

Students, too, benefit from Seoul's size and cultural richness: Because there are more than two dozen universities and colleges in the city, it has become a haven for students from around the world. And where students congregate, a certain amount of cultural richness and diversity can and should be expected, as well as the intellectual symbiosis that seems to develop between the students who call the city home, at least for a time. And because Seoul is so well connected (both in terms of its digital and transportational infrastructures), it is much easier to navigate than many cities in the world.

And though many American students may find themselves a bit nervous about their ability to learn the language, they should not fear: Korean, like so many other languages that employ a different writing system than English, and that sound so hopelessly foreign when heard for the first time, is just as easily picked up when one is immersed in it as is German or French. Really, it is just a matter of allowing yourself to get used to it, to be brave enough to speak it and make the mistakes everyone does in the beginning, and to one day, when you least expect it, find yourself communicating in it.

These days, as the world grows ever smaller and interconnected, and as the times in which we live demand an understanding and an openness to other cultures that has never been the case in the past, being able to function in a city like Seoul is more important than ever. So now is the right time to explore this city that is on the cutting edge of so much of this modern world. The experience of having lived there as a student will benefit you throughout your life.