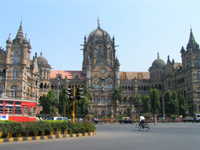 More widely known as Bombay, Mumbai is '[a]ncient yet modern, fabulously rich yet achingly poor...[It] is India in microcosm. Once a sultry tropical archipelago of seven islands, and the Raj's brightest jewel, Mumbai was the dowry of Portuguese Princess Infanta Catherine de Braganza who married Charles II of England in 1661. Today it's a teeming metropolis, commercial hub of an old civilization seeking to find its place in the New World Order.'

The history of this city in western India goes back thousands of years: Stone Age tools have been found there. It seems, in fact, as if history's turbulent sweep has been shaping this city for as long as anyone can remember-or fathom. It has been home to a great number of empires, including, but certainly not limited to, the Buddhists, the Hindus, the Portuguese, and, perhaps most famously, the British. All of these people have left their mark on the city, and as a result, Mumbai is one of the most fascinating cities in India.

Popular tourist destinations include Mani Bhavan, where Gandhi lived in Mumbai; Mahalaxmi Temple, where tourists and locals alike go to pray for wealth; Siddhivanayak Temple, which is dedicated to the Hindu god Ganesh; the Hanging Gardens of Malabar Hill, and the Raj-era Victoria Terminus. In fact, there is so much to see in Mumbai that it is literally impossible to experience everything on just one trip or in a single semester or year there. One would need a lifetime for that.

But Mumbai is about much more than its past. Its present, after all, is nothing short of astounding. It 'is the glamour of Bollywood cinema, cricket on the maidans on weekends, bhelpuri on the beach at Chowpatty and red double-decker buses. It is also the infamous cages of the red-light district, Asia's largest slums, divisive, occasionally violent politics and powerful mafia dons. This pungent drama is played out against a Victorian townscape more reminiscent of a prosperous 19th-century English industrial city than anything you'd expect to find on the edge of the Arabian Sea. Mumbai has vibrant streetlife, India's best nightlife, and more bazaars than you could ever explore.' For open-minded and adventurous travelers, there is literally no end to the variety and range of experience one can have in this city.

Students are drawn to this city not only for its good weather, famous history, and exciting popular culture, but for its excellent educational institutions, as well. 'All professional colleges in Mumbai are affiliated to the University of Mumbai, one of the largest universities in the world in terms of graduation rate. The Indian Institute of Technology, Bombay, one of India's premier engineering schools, and the SNDT Women's University are the other universities in Mumbai.' A number of American universities also run their own programs in Mumbai.

India is one of the most exciting and important countries in the world today. From its burgeoning economy to its increasingly important role in the expansion of international businesses, there are few places who fortunes are more directly tied to those of the rest of the world than India's. And Mumbai is one of the single most important cities in India. So if your study abroad goals are a better understanding of the modern world, and appreciation of the ancient one, and the attainment of a deeper connection to the economic and cultural machinery that makes the 21st Century move as it does, there is simply no better place to study abroad than Mumbai.