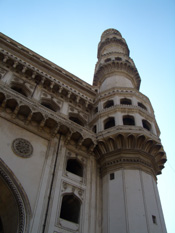 The area in which the city was originally located is now known as the Old City, for in the 416 year since its founding, Hyderabad has grown a great deal beyond its original borders. It is now a relatively expansive city whose metropolitan area stretches out from both sides of the river and encompasses approximately 100 square miles and is home to more than 6 million people.

Because of its location at the crossroads between northern and southern India, Hyderabad has been ruled by a number of different peoples, from the original Qutb Shahi dynasty to the Mughals, the British, and then finally, after independence from British rule, themselves. Today, Hyderabad is the capital of Andhra Pradesh state and one of the most important cities in the modern-day renaissance of India's technological sector.

The first thing most visitors are struck by is the sheer beauty of the city itself. For although it is relatively young by Indian standards (some cities on the subcontinent have histories that extend back thousands of years), it is, nonetheless, home to some of the most breathtaking architecture in the world. The Qutb Shahi tomb is an excellent example of the kind of grand architecture that abounds in Hyderabad. The construction of this tomb was actually overseen by the man buried inside-yes, that's right: Qutb Shahi tradition dictated that the Shah actually have a say in the ultimate appearance of his own final resting place. It is every bit as grand as you'd imagine.

'From the Tombs, carry on to the Golconda Fort, hardly 3 kilometers away. It used to be a mud fort in the 14th century. In the 17th century it was enlarged and strengthened by the Qutb Shahi dynasty, which used it as their capital. It was in the area of this fort that the Kohinoor diamond was first unearthed. It now adorns the crown of the British monarch. If you are feeling energetic enough, do visit the Balahissar, a delightful pavilion perched on the pinnacle of the main hillock of Golconda. In the old days the sultans would take the evening air from the Balahissar, having been carried there in elaborate palanquins! The ruins of the old palace are still to be seen at the bottom of the hill' (www.fullhyderabad.com). There are literally hundreds of sites to visit in the city, and your time would be well-spent visiting any one of them, especially the Charminar monument and surrounding market; the hanging garden at Naubat Pahad; and the Tank Bund, which 'is a dam on the Hussain Sagar lake and is famous for the 33 statues of statesmen and a huge monolithic statue of Buddha.'

Hyderabad, however, is about much more than its history. These days, its role in India's economic ascension cannot be overstated. 'Hyderabad city is today known for its IT and IT Enabled Services, Pharmaceuticals and Entertainment industries. Many call centers, Business Process Outsourcing(BPO) firms, dealing with IT and other technological services were set up in the 1990s making it one of the major regions for call center setups in India.'

Its educational institutions, too, are some of the finest in the country. There are 10 main universities in the city, including the world-renowned 'Osmania University...one of the oldest Universities in India. Technical institutes such as Jawaharlal Nehru Technological University and International Institute of Information Technology are found here. Also based here is the highly acclaimed Indian School of Business.' Many schools in the United States, too, host programs in Hyderabad for study abroad students, and those who choose to spent a semester or a year there are treated to a view of the world that the vast majority of American college students never get . As a result, they are better-prepared for the world beyond the confines of the college classroom that they would have been had they not studied in Hyderabad.

Hyderabad, then, is one of the most exciting and beautriful cities in India in which to study. The opportunities for business contacts are virtually infinite, but because it is not quite as big and overwhelming as some of the other major hubs of Indian industry, it tends to feel more approachable to foreign students. Hyderabad has everything the adventurous student could want-it's just a matter of giving it a chance.