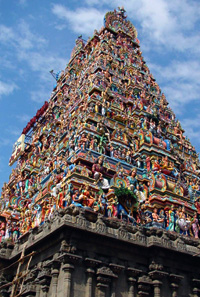 This is a very good thing indeed for both residents and visitors, for Chennai is one of the most beautiful and culturally rich cities in all of India. Historically, Chennai's importance stretches back thousands of years. 'The region around Chennai has served as an important administrative, military, and economic centre dating back to the 1st century. It has been ruled by South Indian kingdoms, notably the Pallava, the Chola, the Pandya, and Vijaynagar empires.' Eventually, though, like the rest of India, Chennai - or, as it was called until 1996, Madras - fell under the control of European powers.

'When the Portuguese arrived in 1522, they built a port and named it São Tomé, after the Christian apostle St. Thomas, who is believed to have preached there between the years 52 and 70. The region then passed into the hands of the Dutch, who established themselves near Pulicat just north of the city in 1612. On 22 August 1639, the British East India Company was granted land by the Nayak of Vandavasi as a base for a permanent settlement, believed to be called Madrasemen. A year later, Fort St. George was built, which subsequently became the nucleus around which the colonial city grew. In 1746, Fort St. George and Madras were captured by the French under General La Bourdonnais, the Governor of Mauritius, who plundered the town and its outlying villages.' The British eventually regained control of the region, and they held onto it until India was granted independence in 1947.

There are countless sites of historical and architectural interest for tourists to visit, including the M.A. Chidambaram Stadium, which is used for cricket matches; San Thome Basilica, within which relics of the Christian Saint Thomas are supposedly kept; and the National Art Gallery. There are also many natural wonders to enjoy, including the Pitchavaram mangrove forest, Marina Beach, and for those visitors or students who are willing to take a day trip out of the city, the waterfalls at Tada should not be missed.

A hot and humid city, Chennai is home to a widely diverse population. As a result of all these widely divergent cultures, and the many languages spoken by the people who live in Chennai, 'English is widely spoken, and is used almost exclusively in business, education, and other white collar professions.' Therefore, visitors and students alike have a much easier time getting around the city than they would in some of the smaller cities and towns on the subcontinent in which English is not as widely spoken.

Students especially have a great deal to gain from studying here. The history, culture, and vibrancy of the city all attract students from all over India, as well as from far-flung parts of the world. The University of Madras and the Indian Institute of Technology, Madras, are just two of the many high-quality schools located in the city. A surprising number of American colleges and universities also offer study abroad opportunities in this beautiful and bustling coastal city.

So no matter what your goals are, from a greater appreciation of indigenous cultures to political sciences to an eventual career in the technology sector, spending a semester or a year in Chennai will certainly help along your path. When it comes to a city like Chennai, the possibilities are endless.