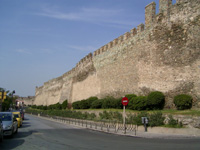 In a nation known for its natural beauty, breathtaking architecture, and unrivaled maritime vistas, few cities can compare to Thessaloniki. Situated on the Gulf of Thermaikos on the Aegean Sea, this city of 1 million residents is also 'a major economic, industrial, commercial, and cultural urban center as well as a transportational hub for southeastern Europe...It hosts a large student population and it is widely renowned for its large number of monuments of Byzantine architecture as well as its [excellent] nightlife.'

Many students are attracted to Thessaloniki for its Mediterranean climate, which, though it can get rather chilly during the winter, is primarily-and famously-pleasant the rest of the year: The heat of the day is tempered by the sea breezes, and the abundance of outdoor activities make even the hottest days bearable. Because of this beautiful weather, Thessaloniki is home to a number of international and regional festivals, including the Thessaloniki International Fair (held for 10 days every September), the Thessaloniki International Film Festival, Dimitria (a festival of theater, dance, and music that lasts for three months of every year), and, perhaps most appealing to students, the world-famous DMC DJ Championship.

But Thessaloniki's allure is about much more than its exciting present, for it does, after all, possess one of the most exciting and fascinating ancient pasts in the world. 'The city was founded circa 315 BC by Cassander, the King of Macedon, on or near the site of the ancient town of Therma and twenty six other local villages. He named it after his wife Thessalonica, the sister of Alexander the Great...Thessaloniki developed rapidly, and as early as the second century BC, the first walls were built, forming a large square. It was, as all the other contemporary Greek cities, an autonomous part of the Kingdom of Macedon, with its own parliament where the King was represented and could interfere in the city's domestic affairs. After the fall of the kingdom of Macedon in 168 BC, Thessalonica became a city of the Roman Empire. It grew to be an important trade-hub located on the Via Egnatia, a Roman road that connected Byzantium (later Constantinople), with Dyrrhachium (now Durr‘s in Albania), facilitating the trade between Europe and Asia.' Over the following centuries, Thessaloniki was under the control of thr Byzantine Empire, the Venetians, and the Ottoman Empire. Today, it is the second largest city in Greece, and an important hub of commerce and culture in the Mediterranean world.

This international character, so typical of a city on the crossroads of the eastern and western worlds, is still in evidence today. From the ruins of ancient civilizations to the culture itself, Thessaloniki is both decidedly Greek and also surprisingly international in character. Much of the latter, of course, is likely due to the preponderance of students from all over the world. But it is also a testament to the city itself, and to the ways in which people react to it and make it their own.

Students are drawn to Thessaloniki for many reasons. Whatever attracts them to the city, however, the result is usually the same: A semester, year, or four-year experience that changes the way they see the nature of interactions between modern and ancient cultures, as well as their understanding of the relations between people from around the world. Many American colleges and universities host programs in Thessaloniki, as do schools from the far corners of the earth. Of course, some students choose to study at Aristotle University of Thessaloniki, probably the most famous educational institution in the city, though certainly not the only one.

For whatever reason people choose to study in Thessaloniki, and whatever their goals are, the result is often the same: An experience that broadens their horizons, increases their appreciation of history, and changes the way they look at their world. There's nothing more educational than that.