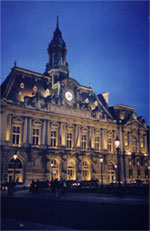 Its history stretches back to the Turones, a Gallic tribe that inhabited the area and subsequently gave its name to the city. The Romans knew the city as Turonensis, and the modern name of Tours is both harkening back to the Turones as well as the French word for 'tower'. Perhaps this etymology is a result of the fact that Tours played a critical role in the defense of France when the famed Battle of Tours, in 732, prevented the Islamic expansion from crossing over to France from Spain. Or it may be a reference to the architecture of the beautiful Cathedral of Tours, which boasts two gloriously elaborate towers at either side of its façade.

The dialect of the city is known throughout France to be the most pure in the country. For while inhabitants of the other cities possess certain accents unique to their town or region, the Tourangeaux, as the residents of Tours are known, speak with a purity that is the envy of Francophiles the world over. This means that, for students wishing to study in France in order to perfect their speaking ability in the language, Tours is literally the perfect place to live.

Though Tours is located in the southern part of France, its appearance is more akin to that of the northern cities and towns. In the south, after all, it is most common for buildings to feature red terra cotta roofs. Tours, however, takes its cue from the northern villages, as most of its building are topped with blue slate. But aside from those roofs, Tours is quintessentially southern French. It is famous for its old part of the city called Le Vieux Tours, with medieval style houses in half-timbering and the Place Plumereau, a square with pubs and restaurants full of people who dine and drink outside at tables filling the center of the square. This, of course, is a ritual all over France, but it is taken especially seriously in the warmer southern regions, where the weather is conducive to more frequent and extended al fresco dining. There are also several weekly markets at the picturesque Place Jean-Jaures.

For those interested in medieval architecture, Tours is a paradise, with its cathedral standing as one of the tallest and most impressive medieval structures in Europe. The cathedral dominates the historical center of the city and stands as a symbol of the city's spirit as described by Erasumus when he said Strasburg possesses 'a monarchy without tyranny, an aristocracy without factions, democracy without turmoil, wealth without luxury and prosperity without arrogance.' In addition to the striking cathedral, Tours also offers many other attractions such as its Astronomical Clock, Rohan Palace, Saint-Thomas Church, and its beautiful French Quarter.

Tours is well connected to the rest of the country, so students who choose to spend a semester or a year there will have a very easy time exploring the rest of this beautiful country. Tours is on one of the main lines of the TGV, which is the high-speed train that whisks travellers all over France at breakneck speed. You can travel down the Western coast to Bordeaux in two hours and a half, or to the Mediterranean coast via Avignon and from there to Spain and Barcelona. It takes one hour by train from Tours to Paris by TGV.

Because of all the students who choose to study in Tours, it is one of the most exciting cities in the country when it comes to eating and nightlife. Giant Irish pubs, pizzerias and branded ice cream parlours are slowly making inroads into the area, but there are plenty of less commercial places to be found in the streets around, with some good café-bars on rue du Commerce. Even in summer, when local students are away, the nightclubs just off Place Plumereau fill up with backpackers, locals and language students, though things don't usually get going until past midnight. Of particular interest to many students is Le Bateau Ivre, which attracts international reggae, world music and hip-hop acts, as well as occasionally hosting concerts of French chanson.

Many universities have programs in this exciting and beautiful city. Depending on the program you choose, it may be run directly through the American school you choose to go through or hosted in either the University of Tours or the Institute of Touraine. All of these options are excellent. And as long as you go with an open mind and a penchant for taking advantage of all the opportunities Tours and the surrounding Loire region have to offer, you will have the time of your life.