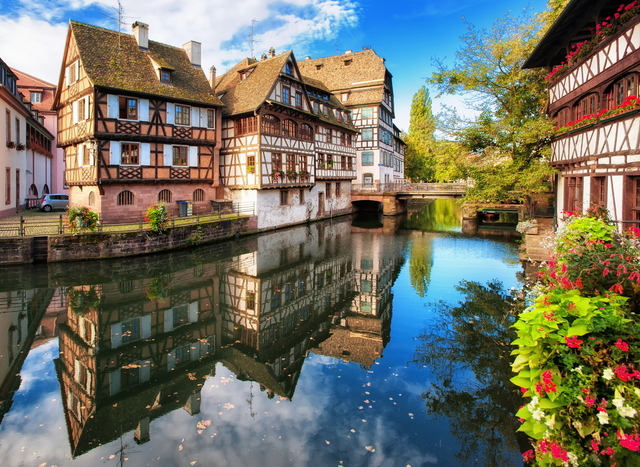 Having trouble picking a country to study abroad in? Maybe you’re stuck between two? A study abroad program in Strasbourg, France, could be the answer! Located in the Alsace region of France, Strasbourg combines the cultures of France as well as neighboring Germany to create a unique study abroad experience. You could explore the cultural traditions of these two countries while potentially simultaneously earning credits toward a degree: when you combine studying and exploration, it’s bound to be an adventure.

Why Study Abroad in Strasbourg, France?

By studying abroad in Strasbourg, you could tackle two goals: earning potential valuable credit towards your current degree (or just expanding your knowledge), as well as getting the opportunity to explore a unique culture. Those studying engineering, history, art, and politics especially might find interesting programs due to Strasbourg’s Germanic influences and unique architecture. Your education doesn’t have to remain inside the classroom, either! Take time out of doors to learn about the history of Strasbourg by exploring the streets and talking to the people of the charming city. Of course that doesn’t mean you couldn’t bring your textbooks with you to soak in the distinctive views of Strasbourg!

What Could Life Be Like When I Study Abroad in Strasbourg, France?

The food: Strasbourg is part of the Alsace region of France, and takes part in the Alsatian culinary tradition. This style of cooking borrows heavily from its Germanic neighbors and recipes rely more on heartier ingredients than the rest of France – often incorporating wine, beer, pork, and cheeses into recipes. These meals won’t leave you hungry, either, as portions are often more than generous.

Here is a list of some Strasbourg staples that could leave you with a full belly:

This region of France is also known for its Riesling wine. What a happy coincidence that white wine pairs well with these salty dishes. Grab a glass and relax.

The culture of Strasbourg: The Alsace region is unique in that, through its history, it has been part of both France and Germany. The borders have shifted around the city, and it’s therefore developed a culture that reflects both. This might be seen in its food, architecture, wines, and regional language. One prime example is the medieval, black and white timber-framed buildings in older sections of the city, type of construction that is abundant in adjacent parts of Germany.

DID YOU KNOW? The Easter Bunny might have made his first appearance in Strasbourg?  He was first mentioned by Georg Franck von Franckenau in his essay “About Easter Eggs” in 1682.

Its sights: Strasbourg is a picturesque place to explore. Next time you need a study break, check out some of these sights:

In addition to those listed above, Strasbourg is full of other historical sites, city centers, environmental excursions, and UNESCO World Heritage sights to enjoy. Ask around for recommendations or plan excursions based on your personal interests.

Studying abroad in Strasbourg, France, could be a great way to sample two cultures at once. You could tap into a contemporary French city while simultaneously sampling the Germanic traditions built into its foundation. The Alsace region is truly unique, as are the educational programs you could take part in. Ready to plan your trip? To begin your search, browse the list of links below. When you find a program that sounds interesting, click through the link to request more information. Good luck finding a great study abroad program in Strasbourg, France, today!