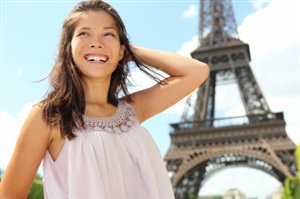 Study abroad programs in Paris provide students with an amazing opportunity to earn academic credit in a city cherished by people throughout the world. Paris, a city with a global reputation for power, presence, and beauty, is at once classy, stylish, whimsical, and charming. It is also a culturally, politically, and economically dynamic city with options for studying and exploring to please most anyone. When you study abroad in Paris, you walk away with a wonderful, profound, and well-respected experience.

Why Study Abroad in Paris

In Paris, the air is thick with possibility. Students who live and study in Paris take advantage of its possibilities through study at quality educational institutions and living life in any of Paris’ cool and trendy neighborhoods. Students that study abroad in Paris also take advantage of Paris’ abundance of cultural hotspots, icons, and happenings. Many students even commit to advanced language programs and quality internships in some of Paris’ many powerful industries. Ultimately, Paris study abroad programs provide students an expansively wonderful opportunity academically, personally, and professionally.

Paris is the capital city of France and located in the northern-central part of the country in the heart of the Île-de-France region. It is situated along the river Seine and has two inhabited islands, the Île Saint-Louis and the Île de la Cité. France is the most populous city in the country and is surrounded by smaller cities, quaint villages, and lovely countryside.

Study abroad in Paris and you'll find it has an urban personality balanced with the ambiance of a quaint and well-loved neighborhood. Students that study abroad in Paris can easily navigate and quickly become familiar with the many parts of the great city. Ultimately, Paris boasts the vibrancy, diversity, and dynamics of a large city but has somehow managed to feel like a cozy smaller one.

The climate in Paris is oceanic allowing for a mild and wet climate. Summers are warm with some hot days, and winters are cold with some days below freezing. Springs and falls are temperate with a medley of warm and cool days.

The official language of France is French, which is also the most commonly spoken language throughout the city of Paris. Along with French, Paris officially recognizes numerous dialects of the language such as Alsatian, Catalan, Corsican, Breton, Gallo, and others. These dialects and some other languages are spoken throughout the city, but you will most commonly encounter people who speak French. Also, although there is a large tourist and expat population in France, the majority of interactions on the streets and in stores, restaurants, and throughout the city, will occur in French. However, some more touristy areas have businesses (especially restaurants) that cater to tourists and therefore translate many of their menu items and services into English.

Paris study abroad programs most commonly offer curricula in French or English depending on students’ needs. Many programs offer French-language instruction and immersion as options, and students can certainly study and practice the language as part of their programs or by living in the country and interacting with Francophone people.

France is a part of the European Union and embraces the Euro as its official currency. In early 2014, one euro was equivalent to approximately $1.40.

The cost of food, of course, depends on one’s needs and preferences. Again according to Numbeo, eating out can cost anywhere from $8(for fast food) to $75 (at more expensive restaurants). Food from the grocery store is relatively similar to the costs of foods in more expensive cities in the U.S. However, the costs of groceries also depend on one’s specific needs and preferences.

Public transportation is available in Paris and is commonly used throughout the city. According to Numbeo, a monthly bus pass costs approximately $65 and taxis typically charge start fees, a fixed price per kilometer, and waiting fees. One liter of gasoline (there are almost 4 liters in one gallon) costs close to $2. The prices of other goods, such as clothing and entertainment, depend upon consumers’ preferences.

Paris’ economic, political, and cultural prominence, breadth, and influence make Paris a significant player in global affairs and a beloved city to people worldwide. When you study abroad in Paris, you can enjoy its lovely culture and discover for yourself why the city is such a big deal. To get you started, here is a short list of some of the many things you must do to experience Parisian culture: