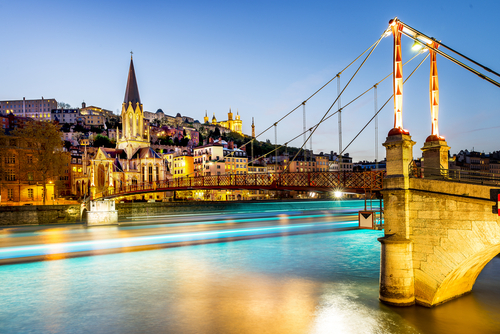 If you’re looking to take part in a cultural city with its own unique history and traditions – but want to stay away from typical study abroad locations – you may want to consider a study abroad program in Lyon, France. The city presents a great opportunity to earn valuable degree credits while delving into a culture that displays both its contemporary mindset and historical past. Interested? Keep reading to learn more about Study Abroad in Lyon programs.

Why Study Abroad in Lyon, France?

Studying abroad in Lyon, France could be a great way to continue your education and play a role in a foreign culture at the same time. The bustling city of Lyon is among the most highly populated cities of France and its education possibilities reflect this. Choose from an array of possible concentrations to study in the classroom before going out to explore the streets. You could focus on languages, culinary arts, theatre, or politics, just to name a few. When you’re done tackling your coursework and are in need of a study break, the exciting city of Lyon is waiting right outside front door. Venture a bit further and you could even explore the French Alps, Rhône River, and Provence.

Sound exciting? Keep reading to get a glimpse of some possible adventures you could try during your study abroad program!

Grab a Bite to Eat

Lyonnaise cuisine was once the cuisine of royalty and nobility and the tradition of its rich, elevated tastes remains today. The unique flavors of its dishes might be due to its geographical location: it is able to gain dairy from northern areas such as Alsace and Lorraine, while drawing vegetables and olive oil from the southern Mediterranean. Not to mention that, historically, it received a fresh input of spices due to its role as a distribution center for Italian spice merchants. These many spices still make an appearance in recipes today!

When talking about the development of Lyonnaise cuisine, it’s hard to ignore the Méres Lyonnaises, or the Mothers of Lyon. These female cooks helped develop the gourmet reputation of the city in the 18th century. They had previously been chefs in private households, but left en masse to start their own businesses. And what a delicious business it was!

If you’re thinking about trying some méres cuisine, you might want to start with quenelles de brochet – it’s a Lyon specialty. To make the dish, a meat dumpling is poached and then placed in a decedent cream sauce. It’s a hearty meal that could leave you more than full! Of course, Lyon is known for its charcuterie, so you should definitely try a rosette de Lyon with some fresh cheese and bread for a quick snack.

Lyon offers its share of museums for locals and internationals alike to explore. The Musée des Beaux-Arts de Lyon has often been compared to the Louvre in terms of noteworthy pieces of art. Housed inside this museum are exhibits for everyone: paintings, sculptures, antiquities, and even the second-largest Egyptian display in France. Not to mention that works by Delacroix, Rembrandt, and Poussin are on display. Talk about a rich, cultural adventure.

If you’re looking for something other than art, you might want to check out the Musée d’Histoire de Lyon. This history museum not only has artifacts from Lyon’s development and the Renaissance, but it’s also located in the medieval Quartier Saint-Jean quarter of the city. Not only do you get to see history in the museum, but in the streets you explore on your way!

In addition to these sights, Lyon is full of other historical sites, city centers, environmental excursions, and UNESCO World Heritage sights.  When studying abroad, try to see as many as you’re able to!

Lyon might not be the first place you think of to study abroad – some students might not even know it exists. They’re the ones missing out! A study abroad program in Lyon, France, could be a great chance to continue your education while taking part in a city rich in cultural heritage. If you’re ready to take the plunge and veer off the beaten path, browse the list of links below to search for a perfect program for you. If a program catches your attention, follow the link to request more information. Good luck as you begin your journey to find a perfect study abroad program in Lyon, France.