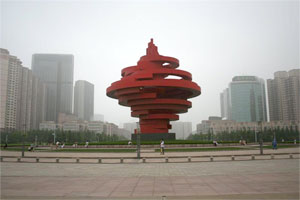 With a charming seascape, colorful scenery and gorgeous ocean-views, Qingdao is sometimes referred to as the 'Switzerland of the Orient.' Located on the southern coast of China's Shandong Province, this spectacular slice of Chinese paradise is considered by many to be one of the country's top cities-both for travel and for studying abroad.

Qingdao's strategic location right on the Yellow Sea, just west of South Korea and Japan make it an ideal port city-a role which its inhabitants have gratefully accepted. In fact, one of the area's largest exports is beer. The Tsingtao factory has been producing China's most famous beer since 1903!

Students studying here almost universally agree that the weather in Qingdao is ideal for a study abroad destination. Winters are fairly mild, although snow and blustery weather is occasionally seen. The average temperature for the months of December, January, February and March is in the low 40s.

Summers are warm-but almost never blister-your-skin-hot. In fact, with its picturesque coastlines and sunny skies, Qingdao is a top destination for both Chinese and international tourists. The average temperature during the summer months is a balmy 78 degrees, perfect for lying out or taking a dip. If you're after pleasant weather, studying here for spring or summer semester may be your best bet.

In recent years, Qingdao has skyrocketed to international notoriety as an elite sailing destination. In 2008, the sailing regatta of the 29th Olympic Games took place here, and in 2009 the city was home to the Volvo Ocean Race. A multitude of smaller sailing events take place regularly, and the tourist attractions and infrastructure to accompany growing demand are rapidly being developed.

If you're in Qingdao in September or October (the date changes yearly), be sure not to miss the Mid-Autumn Moon Festival. This important Chinese holiday marks the end of the summer harvest season, and is celebrated with friends and family by eating and sharing mooncakes, watching the moon on its brightest night, fire-dragon dances and carrying brightly lit lanterns. Some parts of the city combine these elements and celebrate with a large parade and outdoor festival.

The culture of Qingdao is an especially unique mixture of Chinese, English and German, and it's not to be found in other parts of China. This medley of influence can be seen in the architecture and design of the city itself, along with the cuisine and languages of the area.

Germany's imprint can be found in some older parts of the city. The very first streets, buildings and plumbing systems were constructed in the late 1800s by the German imperial government. Many of these can still be visited today.

Being a port city, Qingdao is big on seafood with a regional flair. The cuisine of the area is called Lu Cai, and is characterized by the many uses of soups in its dishes. The local seafood is also divided into two categories:

Whatever your seafood craving, this Oceanside city is sure to have plenty of what you're after!

The official (government-mandated) language of Qingdao is Mandarin Chinese, although English is now taught in most schools and can be spoken by many residents. Many street and business signs also have dual translations. Because of the rapidly expanding English support, Qingdao would make an ideal destination for a language student.

Many of the international programs offered in Qingdao focus on intensive Chinese language studies. If you haven't thought about studying Chinese, it's time to! This language is spoken by over 25% of the world's population, and with China at the brink of becoming the biggest global market, learning Chinese in Qingdao will benefit you hugely in education, business, finance and nearly every other industry.