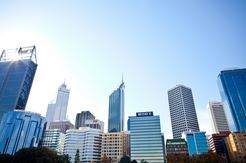 Despite its delightful feeling of a small town, Perth can still boast many of the finer aspects of a modern city with its own hardy selection of clubs, restaurants, bars, beaches, big buildings, and city living. The city boasts an affordable standard of living while providing the benefits of a financial mecca. Throughout the 1980s Perth actually had the reputation as being home to a number of millionaires who were drawn there by the region's mineral wealth.

Perth's weather also continues to draw people to it with an average of about 8 hours of sunlight per day. That is more sunlight than either San Diego or Hawaii can claim. Perth's location bordering the Indian ocean and Swan River provides a number of opportunities for water sports to cool off from the heat that frequently accompanies this sunshine. Another benefit of Perth's location is the lack of humidity that makes the heat pleasant rather than oppressive.

Studying in Perth also provides convenient access to a wide range of nearby wonders. For those looking for some cultural variety, try wine tasting at some of Australia's famous wineries. Also close-by is the historic beachside city of Fremantle, a haven to its relatively small population of 25,000. Fremantle reflects the laid-back culture of Australia along with the historic roots seen in all of its early Australian architecture.

Aside from Fremantle, those studying in Perth can travel a few hours to some of the country's most stunning natural settings. To the south is the Margaret River area, which is known for some of the best surfing in the world. To the north are wonders such as Monkey Mia, a place most famous for the opportunity to pet and swim with dolphins. Also within easy reach are some amazing forests containing trees that are only known in Australia.

Students searching for a relaxed atmosphere to complete their studies will be enchanted by Perth. Take advantage of its isolated setting to get the best of both city living and natural paradise!