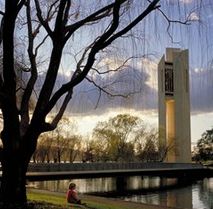 When most students think of studying abroad in Australia, their first thought is typically to study in Sydney or maybe Melbourne. Both cities have a lot to offer, but the capital city of Australia, Canberra, is often overlooked as a study abroad destination. What many students don’t realize is that they’re overlooking one of the best regions in Australia.

Canberra is a great middleground – it has all the amenities of a much larger city (it is the capital city after all), but is it safer, cleaner, and friendlier. It is also one of the world’s few planned cities. In 1901, after years of meticulous negotiating and deals, the six Australian colonies formed a federation called the Commonwealth of Australia. Once the federation was created, they needed to create a capital city. In 1913 construction began on the capital city of Canberra.

The city's design was influenced by the garden city movement and incorporates significant areas of natural vegetation that have earned Canberra the title of the "bush capital". Wildlife can be found roaming the streets (just imagine having a kangaroo in your backyard!). Canberra is also surrounded by national parks, which means there are plenty of opportunities for nature and adventure activities.

Thanks to the fact that Canberra is a planned city, there are very few traffic issues. In fact, Canberra has been nicknamed “the 20 minute city” because of the ease of travel and simple bus system. If you’re looking to explore more of Australia, it takes only three hours by bus to get to Sydney, two hours to the beautiful south coast and two and a half hours to get to the mountains for skiing and snowboarding.

Besides its pristine geographical location, Canberra has a host of other national attractions such as the Parliament House, Australian War Memorial, and National Portrait Gallery. Moreover, Canberra hosts various major festivals, events, activities, and sports such as Floriade, folk festival, TropFest, music festivals, mulit-cultural festival and much more.

Canberra is truly beautiful in all year round, with very distinct seasons. Summers are warm and dry and winters are cold with heavy fog and frequent frosts. It typically does not snow in the Central Business District, but Canberra is close to various snow-capped mountains. In general, you can expect low humidity and not a lot of rain.

While studying abroad in Canberra, you’ll find yourself immersed in a very multi-cultural environment. In 2006, Canberra was home to just over 320,000 people. Only 1.2% are indigenous to the region, and over 20% are from overseas. While studying abroad in Canberra, you can expect to run into folks from all over the world; China, India, Vietnam, the US, and East Asia. Over 80% of Canberra’s residents speak English, but some residents also speak Mandarin, Italian, and Greek.

In general, Canberrans are young and well educated. Only 9.8% of the population is over 65 years old, with the median age being 34. Best of all, you can feel safe studying abroad in Canberra – cases of homicide, assault, and sexual assault are all well below the national average.