...the Easter Market appears in the main square again!

Every year, for the ten days leading up to Easter Monday, Krakow's Easter Market takes over the western half of the huge main market square, or Rynek Główny. I was very excited to be able to see what it's like since I had never been before, and also to compare it to the Christmas market that I liked so much.

A few days before the market opened, some beautiful, pastel-colored and springy decorations began going up, and many wooden huts appeared that would be where food and goods were sold from. Lots of outdoor seating was also there, much more than in the winter because the nice spring weather would allow for it!

As soon as the market opened, I raced up there with my camera in hand, eager to get pics, shop, try the food and just take in the whole scene. I actually visited it several times so I was able to do everything I wanted because some stands closed earlier than others. And I would have gone up there even more than that if I could have, but I left town about halfway through...not that I minded where I went, lol - but more on that later! ;-)

Since my school sits on the west side of the square, I could hear music from the market being played from my classroom window loud and clear. I even took a midterm to the sound of Polish folk tunes(?), which actually made the test not seem so bad - I wish I could always listen to a cheerful soundtrack while taking tests, haha!

There were a couple of similarities to the Christmas market that I noticed, not that that was a bad thing since, as I mentioned,  I liked that market a lot too! I think the same wooden huts were used to house the vendors, and some of the same vendors came back again, but other than than it really had a flavor of its own and was the perfect way to celebrate the Easter and Spring season!

I really enjoyed the market and can't wait for it to come back next year! It's always fun and exciting to have something like that going on in the square! I got lots of photos, so here is a sampling of them:  :-)

The Polish national bird (a white stork) was a star of the market, sitting on nests high above everything (Sukiennice/cloth hall in background). 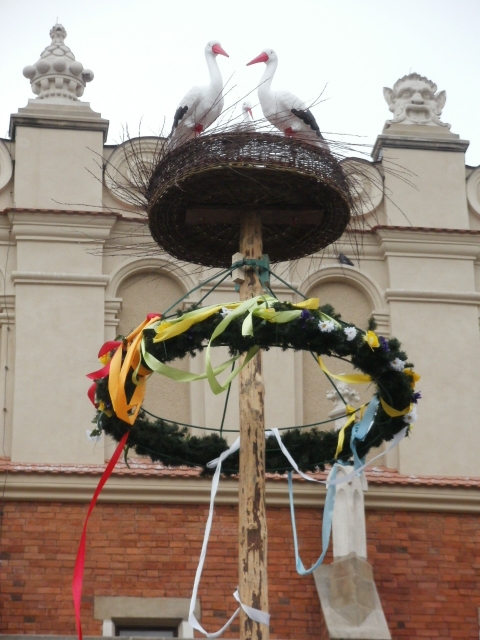 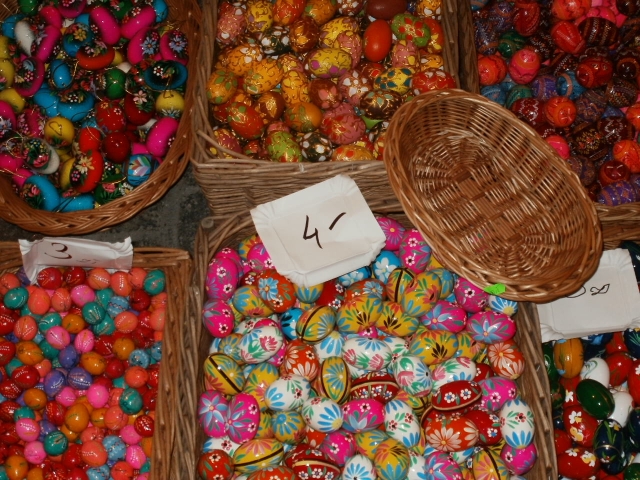 A gofr (waffle) with my choice of toppings...yes, I am a chocoholic hahaha!! This was amazing, btw: 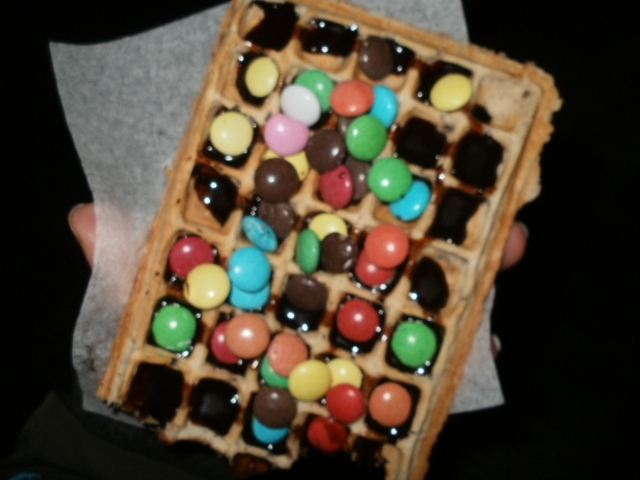 The waffle stand - with cute decorations, including the famous stork! My waffle is getting its tasty toppings added behind: 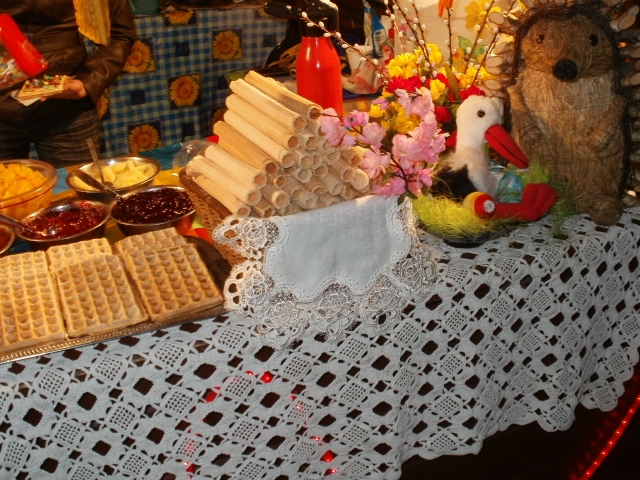 My friend Anna biting into a fruit & caramel gofr. Yummy!! 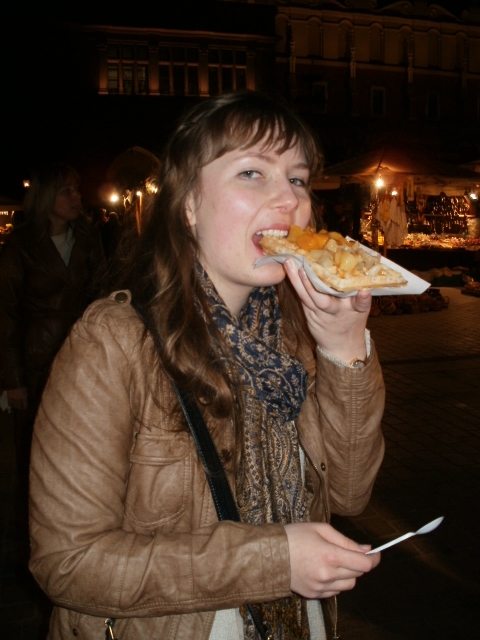 Lambs galore!! These were everywhere at the market, and for good reason - they are adorable, soft and very Eastery! :-) 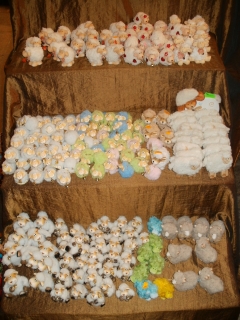 Me checking out the wide selection of Easter baskets: 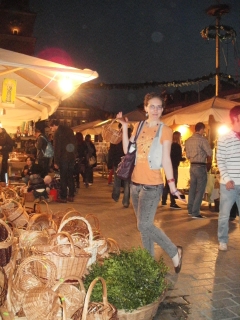 A sign for the Easter fair and some festive wagons at the entrance: 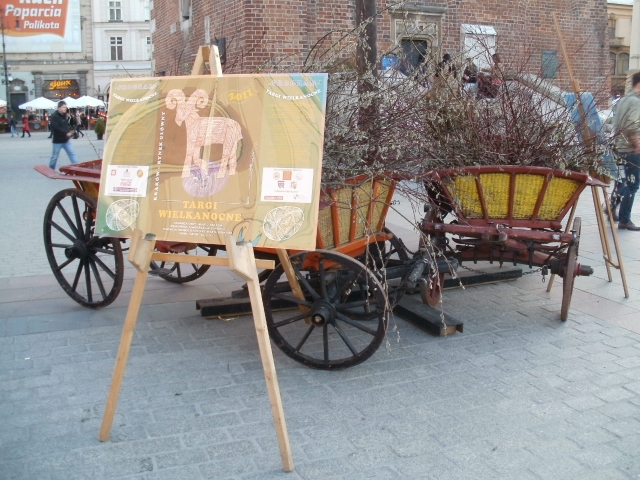 So many babushkas!! I bought some babushka earrings from this cheery stall at the Christmas market:

The Town Hall Tower is a commanding backdrop as it catches the setting sun: 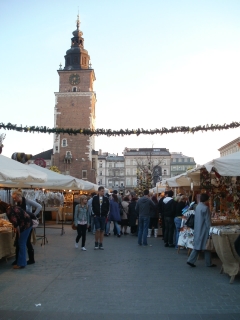 Here you'll find the cure for any kind of candy cravings... 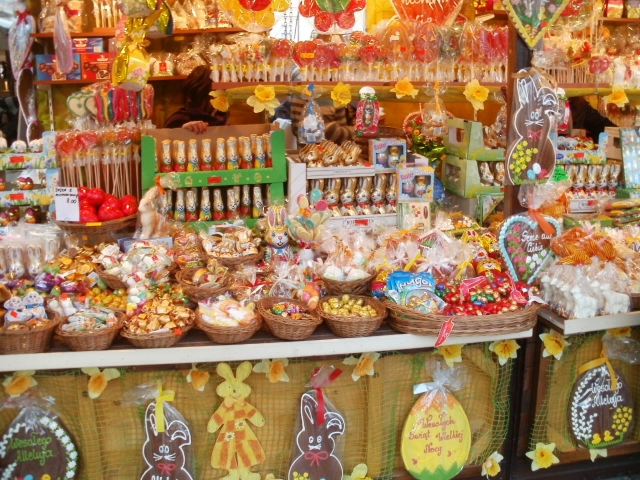 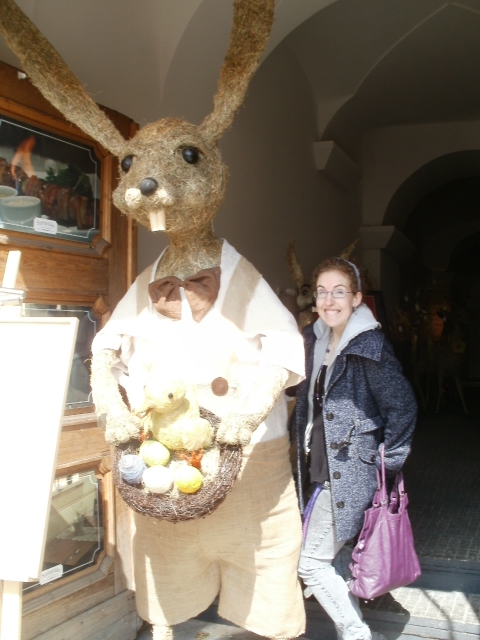 Multi-colored straw bouquets that have religious meaning (like Palm Sunday palms) and can be used to decorate the home with: 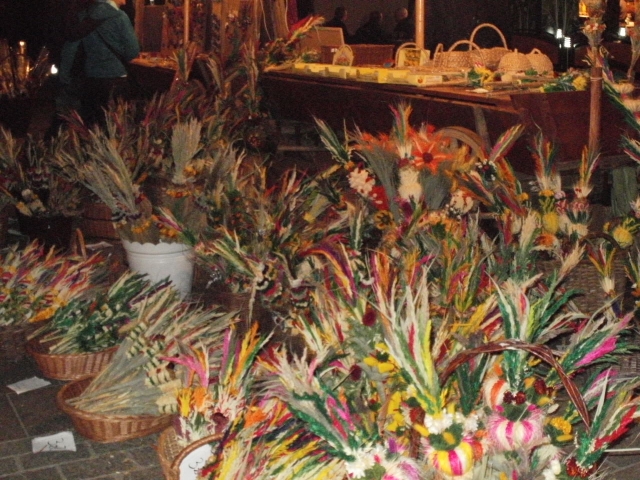 Awwww - I totally would have wanted one of these when I was younger...heck, I still want one even though I couldn't sit on it, hahaha!! 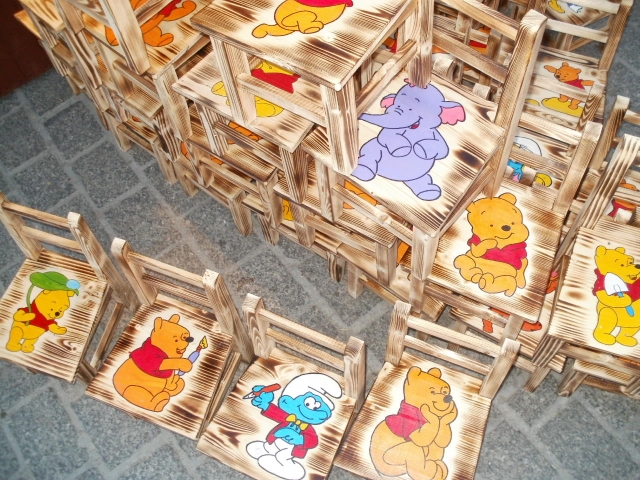 I ran into my friends Kitty & Pete one night at the market: 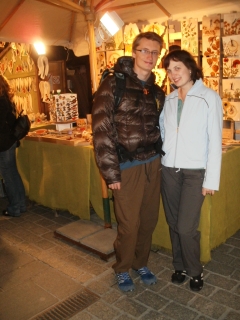 The market's lights turn on as dusk arrives: 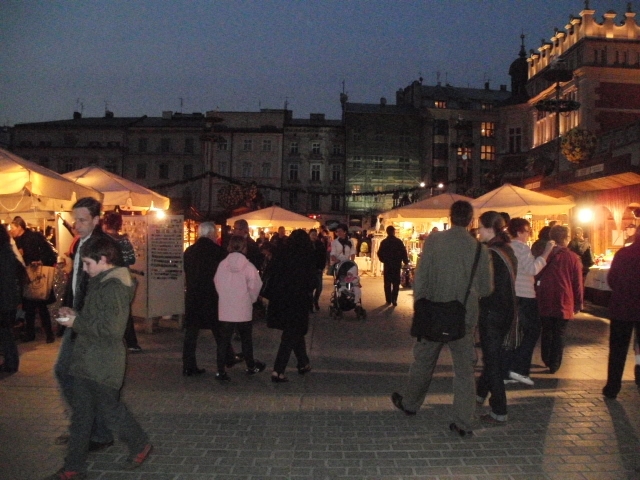 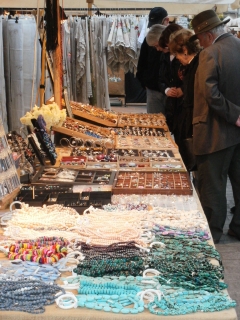 These chubby stuffed lambs were tempting, but I got a smaller fuzzy lamb statue instead: 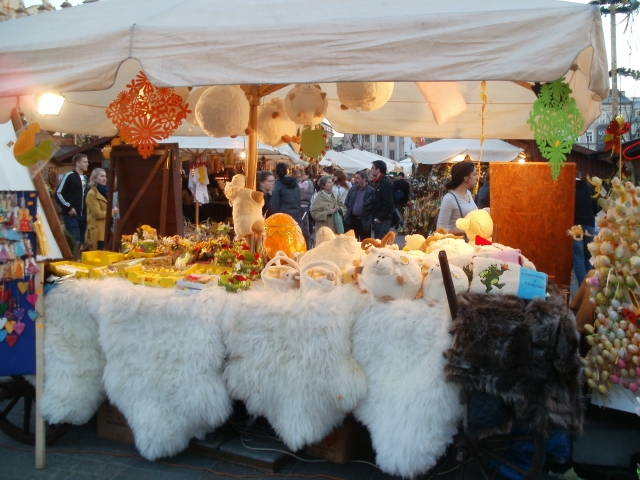 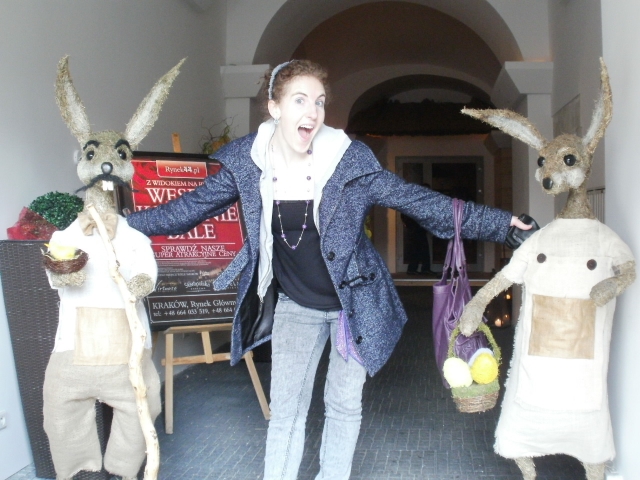 These blacksmiths were hard at work making jewelry, tools, horseshoes and sculptures. They were also at the Christmas market: 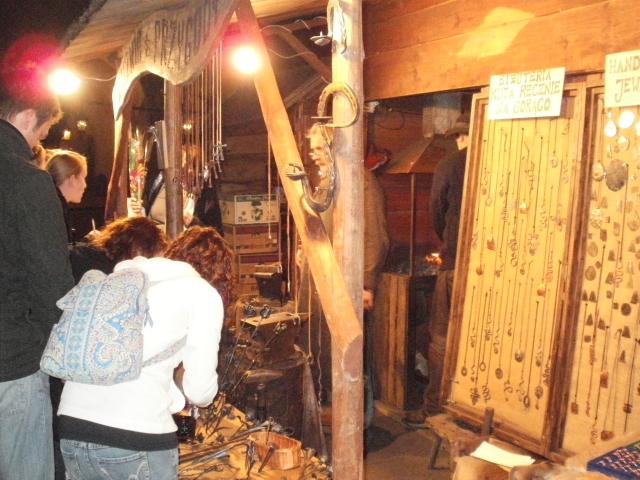 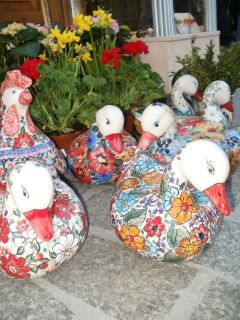 Mmmmm grilled cheese...well, the Polish version of it, with cranberry sauce. This is a smoky cheese that originates in the Zakopane/mountain region, and I love it! 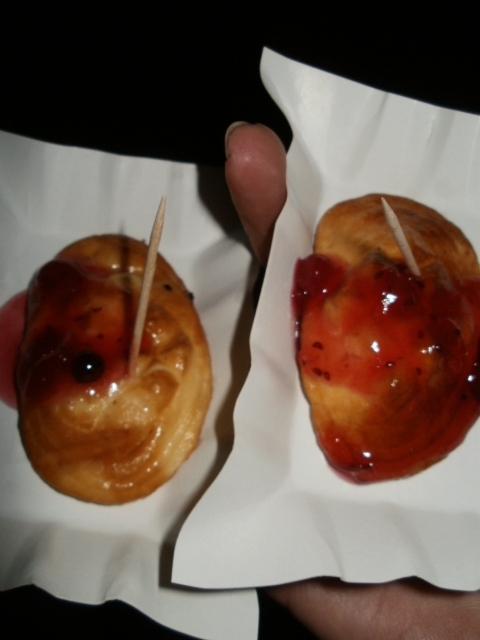 One of the cheese grills - this one seems vintage and is quite fancy: 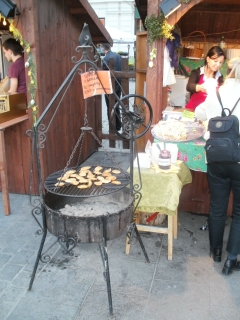 A jewelry stand with Easter decorations and the elegant Sukiennice in the background: 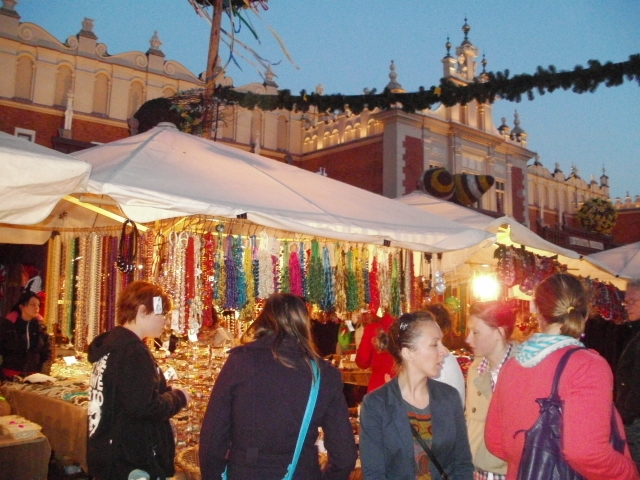 A giant coin(?) on one of the huts, with the legendary Wawel Dragon on it, with Wawel Castle and the shoemaker with the poisonous sheep in the background: 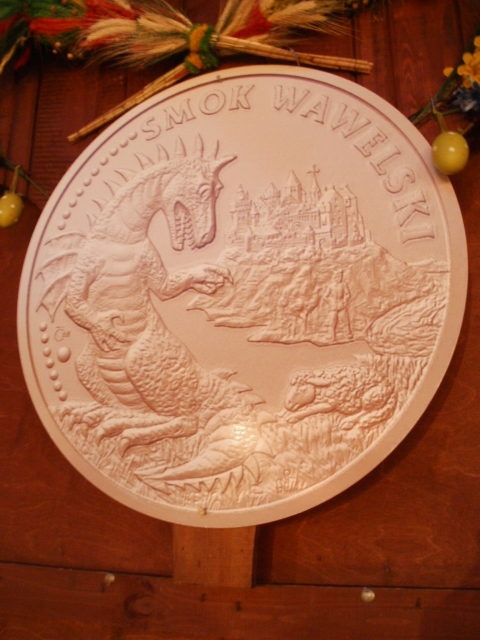 Food stands/grills that never seemed to be without customers! They served various Polish meats & vegetables: 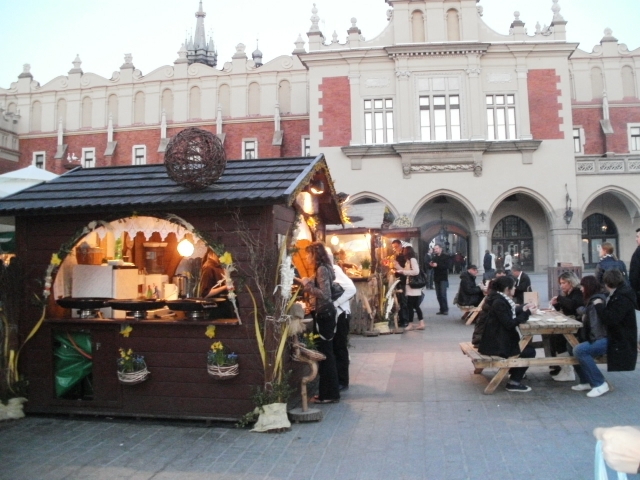 An anniversary memorial of the funeral in Krakow for former Polish president Lech Kaczynski (who was killed in a plane crash last year). This memorial took place at St. Mary's Basilica (pictured) and proceeded over to Wawel Castle, where he is buried. 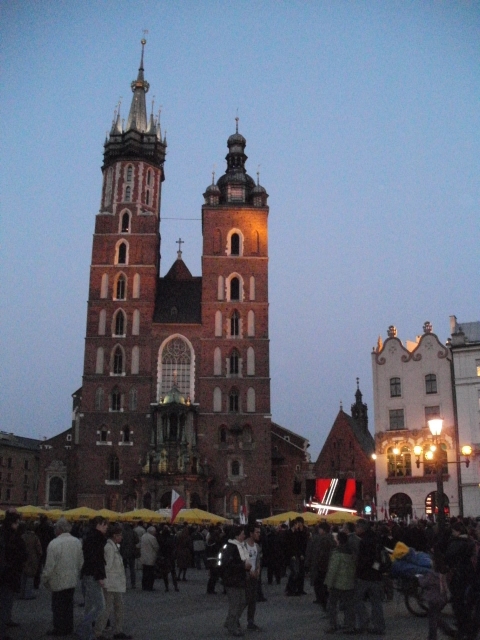 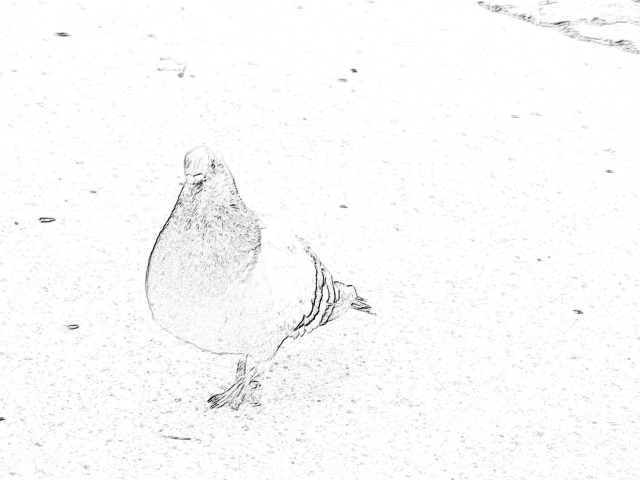 I'm headed off to the warm, sunny islands of Malta in a few days :-D, so a couple of blogs on that will be coming up soon!

I hope that you all have an excellent Easter!!