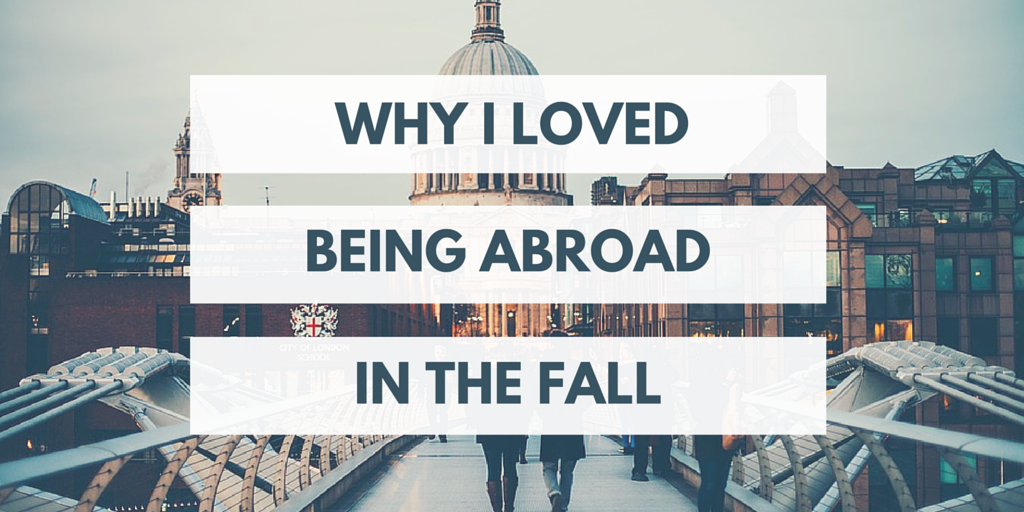 One thing about studying abroad that I wasn’t prepared for was the concept that I wasn’t only studying in a place, but also at a specific time. In the early stages of planning, you probably won’t think of it that way, but there are a lot of timing factors that will influence your study abroad experience. I studied in London during the fall of 2012 and I have almost always explained my experience in precisely that way.

World events and a new perspective

My particular experience was influenced by the lingering presence of the 2012 Summer Olympics, which had taken place just a few short weeks before my arrival in London. Day to day life in England is typically not as patriotic as what I experienced in my first few weeks, when it wasn’t just the tourist traps displaying banners of patriotism. As the spirited atmosphere faded into normalcy, I faced the interesting phenomenon of being in a foreign country during the United States presidential election season. Everyone seemed to have an opinion on the politics of my home country and, while not everyone felt the same, the fact that England is often a more politically liberal country began to show in the opinions I was hearing. Locals had no qualms about asking if I liked the president.

Day to day life in a season abroad

Timing, though, isn’t just about the big things. Being in London during fall and winter meant a lot of small things—watching the leaves change in Regent’s Park, being in Scotland for the first snowfall of the year, and experiencing Christmas celebrations in a new place. I was able to celebrate London’s annual Bonfire Night wearing iconic London fashion — a peacoat and boots. Those are experiences I would have missed out on if I had gone any other time of the year.

What you want out of your time abroad

Even as a professional in the study abroad field, my study abroad experience influences me. I have a soft spot for fall semester experiences—having the summer to save, pack and prepare; the slow fade into the December holidays; even the early dusk and still afternoons of my own English travels. Then there’s my personal determination to encourage students to really dig into the local culture and understand the worldview, but also to remember the status of their own home country in the greater scheme of the world. Students should think to themselves “What do I want to get out of my study abroad experience? What world do I see around me, and how can I achieve that?”

I don’t think there’s some universal formula for finding the “right time” to study abroad. For some students, it’s about being where you are precisely when you need to be and when it suits you best. Other students choose a place or a time because of some arbitrary factor (convenience or friends or when it fits with their schedule) but then let the time and place around them shape their experience. Regardless of when or where you go, I think there’s a reason so many people describe study abroad as the time of their life.

Lindsey Sitler is a Site Specialist at CEA Study Abroad, an organization that helps students spend a semester, a summer, or an academic year studying abroad in 12 countries. Where will your learning take you?