...and apparently St. Nicholas had already been there!

So, this is the last of my winter break posts - good thing I guess, since it's late February already and my second long break, the semester break, is almost over and will need to be written about soon! But, since I traveled to several very interesting places over that first break, I wanted to be sure and cover them all appropriately - which, in the case of L'viv and Warsaw, required more than one post each!

Since I didn't go back to the US for Christmas, my next-door neighbor and good friend invited me to spend the holiday with her family who lives just outside of Kalisz, in central Poland. Besides being humbled by their kindness, I also was very excited to get to see a new part of Poland and finally ride the Polish trains that I kept hearing (good and bad things) about!

I have to say that the reason I had heard good and bad things about the trains is because, well, there is quite a range of quality and space depending on the ticket you purchase, and not referring to class but just the brand of the train. Just on the trip to Kalisz and back itself I rode on three different kinds of trains, and simply put, you pay for what you get. Even the cheapest one wasn't that terrible though - it was just very crowded and I ended up sitting on my suitcase in the hallway, but hey, the view was better out there at least because of all the windows! Talking to some Polish people beforehand, you'd swear the cheapest trains were like coal cars or something and you have to just sit up top, outside, on the mound of coal, haha! ;-)

My friend and her dad drove and picked me up at the train station in Konin very late at night and in freezing rain, but thankfully we made it to their home safely! They have a beautiful, custom designed home in the country, with an acre or so of land that includes woods and gorgeous landscaping...which was unfortunately all covered in snow! I had my own room and bathroom - how nice! I felt right at home there, right down to the tea addictions that we all have! :-)

The cozy room I stayed in, complete with its own mini Christmas tree: 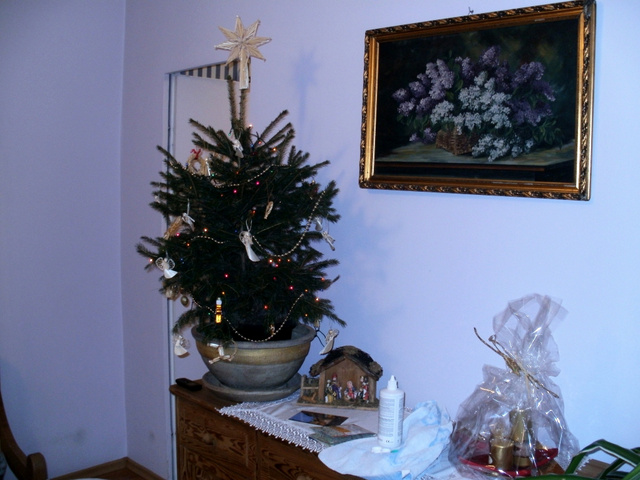 Since at that point I had only had basic Polish lessons several months prior, I was grateful that most of the immediate family and some relatives were fluent in English! I took Polish classes during this current semester break though...more on that later!

Christmas traditions are slightly different in Poland than in the US, and sometimes certain regions of the country have their own specific customs. One tradition that is believed to only exist in central Poland is that of the mysterious dinner guest. This is where at the Christmas Eve dinner table there is a vacant place setting for any hungry traveler passing through that is alone and in need of a place to eat and stay for the night. I think this person is thought to be a foreigner too, so I joked that I was the "mysterious dinner guest" for that year, but the place setting was still put out, just in case anyone else stopped by! I asked if anyone had ever shown up, and they said no, but it's still a nice gesture.

In the whole country, the standard Christmas Eve dinner consists of only fish and non-meat dishes, with the headliner being carp. It was surprising to me at first, since carp is not really eaten in the US (that I'm aware of!), but it wasn't bad, and I love fish anyway, so I actually loved the whole meal because of that! There is also a rule that in order to open presents, everyone must finish twelve dishes from the meal, but since that includes drinks and even tiny samplings of things, it wasn't hard to get there, especially when everything was so tasty!! 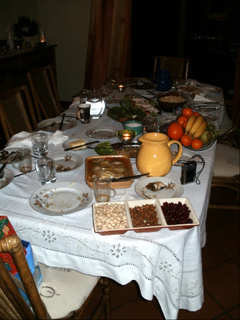 After twelve dishes had been eaten by all, it was time for dessert and presents by the Christmas tree. One more Christmas ritual that is different in Poland is that presents are generally opened on Christmas Eve. So I guess Santa Claus and his reindeer must visit Polish homes the night before doing the rest of the world? Well, at least that probably saves them a little time on their busy Christmas Eve schedule!

At dinner, my friend's parents, sister and two grandparents were there, and during dessert her cousins and aunt and uncle visited for awhile too. The dessert selection was fabulous and included a lot of chocolate...the chocoholic in me was going nuts!! :-) And of course there was tea too...for the tea-aholic in me.

The delicious dessert spread - that pretty Christmas tree was like a giant brownie!! Yummm!! 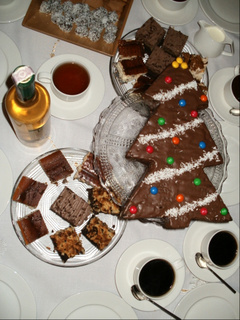 The mischievous but adorable family cat, Margo. I love people names for animals! :-) 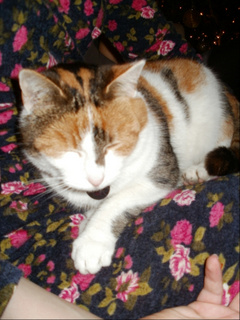 Later that evening, we went to a late Christmas Eve Mass (Poland has mostly Catholic churches) in a very old and lovely church in Kalisz, and that was a neat look into one aspect of Polish culture.

On Christmas Day we had leftovers for the main meal, which I was happy about since I had enjoyed the fish and such so much the previous night. I also got to meet a few more of my friend's relatives that day, and they all seemed very sweet, even with the language barrier.

I stayed at their house for three nights and it was wonderful getting to know the family, learning about how Christmas is celebrated in Poland, and seeing a bit more of the country. Next time I see them maybe I will be able to speak more Polish than the few phrases I was attempting at the time!

More about those very tricky Polish classes, exploring new neighborhoods in Krakow and other semester break activities in the next post!

I'll end with a funny pigeon pic again - this one was chillin on the top of a door in Krakow's main train station. Those silly pigeons! ;-) 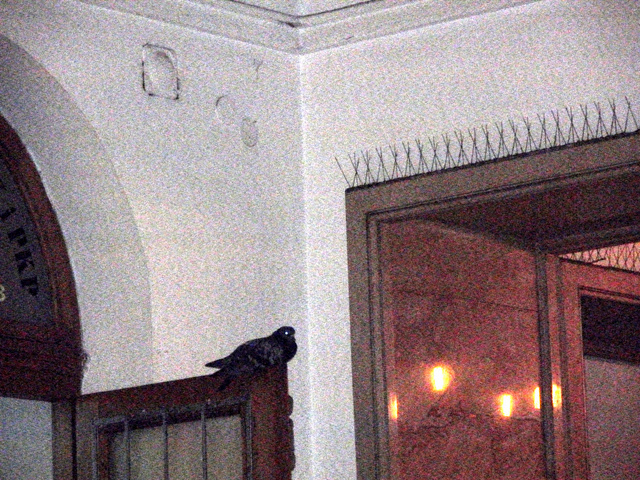 I think I'll have to make the "funny pigeon pic" a staple in each post from now on. There are just so many photogenic pigeons here that do such cute and crazy things that I can't not do it!