...to jump-start the day and find a cheap jacket.

A cheap jacket? Huh? Why yes, that was one of my more exciting finds (it's almost winter, after all!), among many, at the Plac Nowy Sunday morning outdoor clothing market in Krakow's Kazimierz neighborhood. It's basically like a TJ Maxx or Marshall's, but outside. A bargain hunting fashionista's dream! My first time going, I thought it would have clothing like you'd find at a regular flea market, where most of it is pretty sketchy and outdated, but this one is surprisingly posh, and in the Polish currency, also often as cheap as the less "sophisticated" ones. :-)

Outdoor market with clothing in Slupca, Poland. This photo is thanks to Wikimedia Commons user Marcin Majdecki: 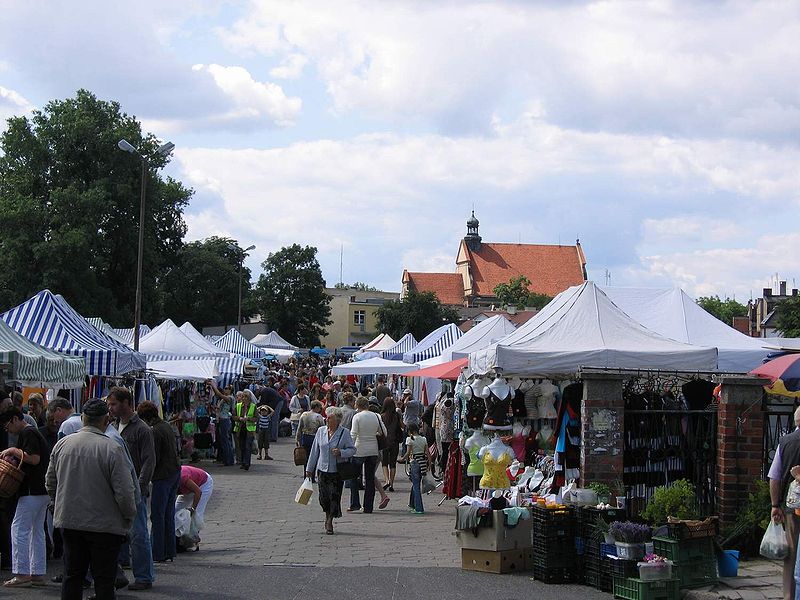 Note: As you can see by the first photo, my camera was unfortunately still being fixed when I visited two of the three markets in this post. So, I hit up the trusty Wikimedia Commons again (thanks WC!) and found some nice photos that'll work for now. More of my own pics will be back asap! I will replace these borrowed ones at that time as well, assuming mine are halfway decent... :-)

Krakow is home to several popular markets, selling everything from produce to antiques to electronics and live animals. Most of the markets are many centuries old and operating in generally  the same way as they always have. In the usual market style, they all seem to close up by mid-afternoon or earlier, and even though that can be tricky for an extreme night owl like me, it's always worth going once I get there, and any tiredness will fade away too. When my inner shopaholic wakes up, there's no time for sleep. Even for less enthusiastic shoppers, just going to take in the whole scene can be plenty entertaining, with all the various people everywhere, exotic and familiar food smells drifting through the stalls, and a chance to witness the art of bargaining in action. I'd also say that even someone that doesn't come to shop will probably find something interesting to bring home with them.

A farmers' market in Konstancin-Jeziorna, Poland. This photo is thanks to Wikimedia Commons user Ejdzej: 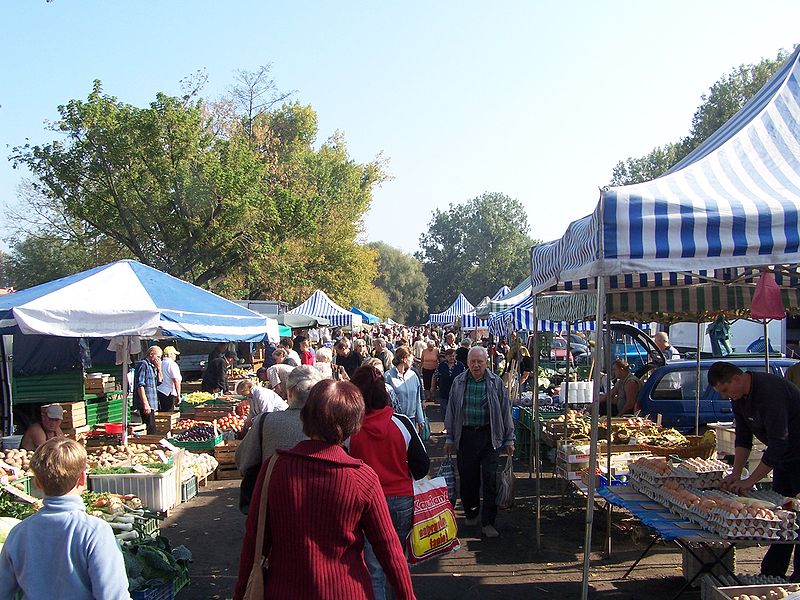 Plac Nowy (New Square) used to be a Jewish market before WWII and now it sells different things on different days, including of course the clothing on Sundays. They also sell a whole lotta Zapiekanki - which have become my new obsession - from a round, brick building in the center of the square. These are basically long, skinny personal pizzas on french bread that come in all sorts of mouth-watering flavors, with ketchup and/or mustard on top if requested. Yum!! And my addiction is intensified by the fact that besides being the food star of the show at Plac Nowy, they are also sold everywhere around town and available 24 hours a day! Very convenient though, I must say, especially after a late night out on the town.

Omg, that one is loaded up good! This photo is thanks to Wikimedia Commons user Mariuszjbie: 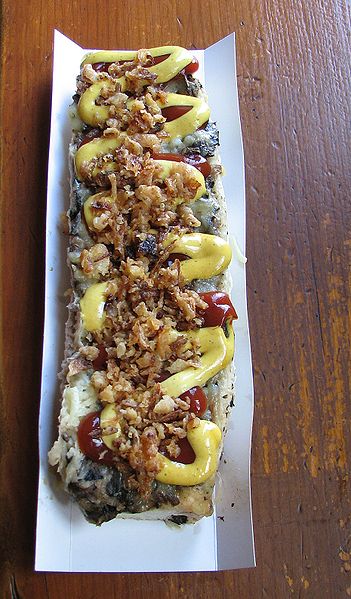 Delicious Zapikanki are sold from that round building, and when going on, the market surrounds it. This photo is thanks to Wikimedia Commons user Zygmunt Put: 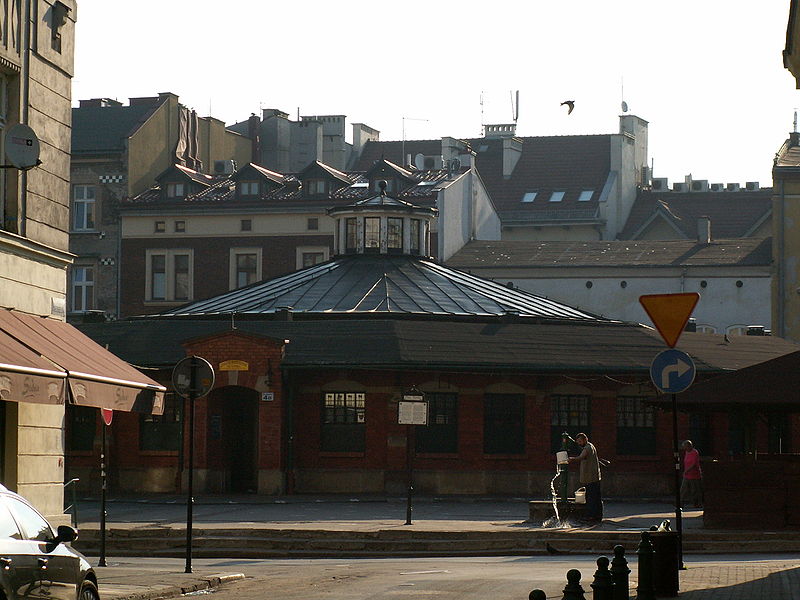 Hala Targowa at Plac Targowy Unitarg, also in the Kazimierz neighborhood of Krakow and another market I have visited, is like a gigantic, chaotic, smoke-filled garage sale. And though that may sound unappealing, it's actually oddly not. This is where tourists can get in tune with the way of the locals while picking up not only very unique souvenirs, but also possibly valuable antiques for a steal. By mid-morning on Sundays, the amount of people can be at a point where it's hard to get through the narrow pathways, and while at first I was annoyed by this (and the cig smoke), I soon just viewed it as a cool cultural experience and it became fun. This market sells everything...and I mean everything, with some items falling into the "extremely questionable" category. Plenty of Stalin busts and other such memorabilia can be found here too, for anyone in the market for one.

A market selling a mixture of goods in Zielona Gora, Poland. This photo is thanks to Wikimedia Commons user Alex1011: 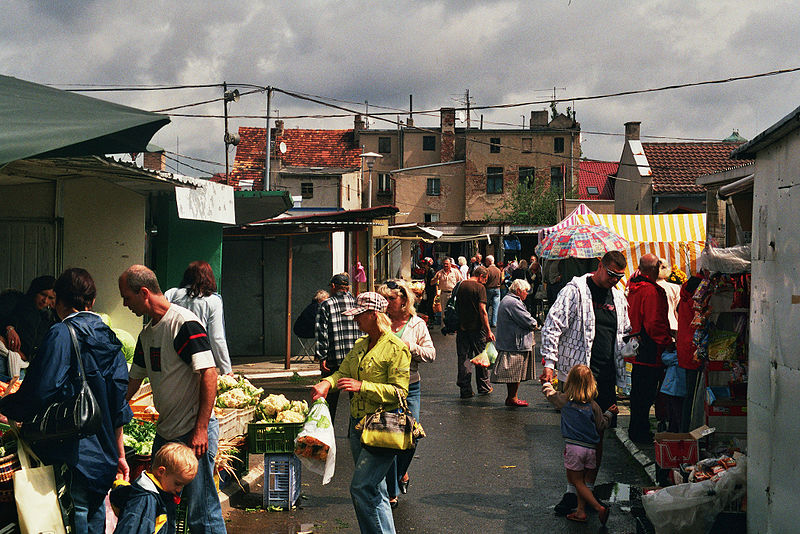 A colorful produce market in Mszczonów, Poland. This photo is thanks to Wikimedia Commons user Radosław Botev: 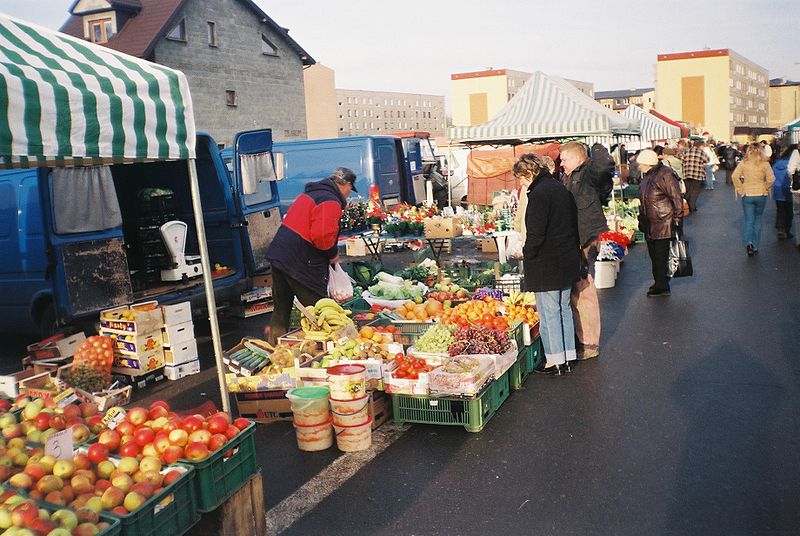 And now, finally, two of my own photos from before my camera broke! Yaaay!!! These are from a semi-covered marketplace called Plac Imbramowski, not far from Old Town that sells mostly fruits and vegetables, but a few other things as well, like wicker and flowers (2nd photo below). My friend Marzena (pictured in 1st photo) and I used that big pumpkin to make some scrumptious soup on a chilly fall day.

I still have yet to get out to all of the great markets that go on in Krakow, but I'm working on it! The two in Kazimierz that I talked about in this post have become weekly traditions of mine now, because there are always new treasures to check out and just wandering around at them is quite enjoyable. I'll cover the other markets another time, but next up is a local legend, Smok Wawelski, the feared Dragon of Wawel Hill! Eeeekk!!! :-O